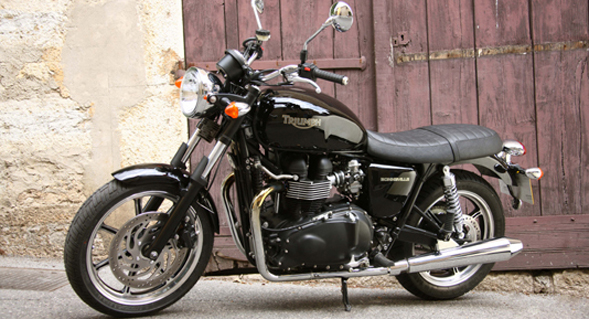 I’ve been a certifiable scooter crazy person for over a year now. The scooters I like the least still enjoy preference over almost any motorcycle. That is, until I started looking at Triumph. It’s the british thing. I’m such an english petrol-head at heart. From dad’s ’69 MGb GT to my MINI Cooper S, I’m a fan of of pretty much anything UK and internal combustion.

A few months ago, I got the Triumph motorcycle itch. With the prospect of selling the Blur, the thought of a Triumph Thruxton was looking very tempting. So I headed down to MotoPrimo in Lakeville, MN and got a test ride on a Triumph Bonneville — since the Thruxton is but a modified Bonneville.

I was as excited as I was apprehensive. I’d never ridden a proper motorcycle before. For the uninitiated, the biggest difference between riding a motorcycle and riding most scooters is if and how you shift gears. Luckily for me, my first scooter was a 1979 Vespa P200E, with a 4-speed manual transmission. So left-hand clutch isn’t that big a deal. Shifting with my left foot, rather than my left hand was a bit of a brain stretch at first, but wasn’t that hard to get used to. Once I familiarized myself with the controls and took a deep breath, it was time to head on down the road.

A great moment happened just as I was strapping on my helmet for the test ride. They’d brought the bike out front for me, and just as I was about to climb aboard a guy on his way in the door asked me “What year is your Bonneville?” That’s the modern Bonneville’s real charm: it’s authentic style.

I’m not going to pretend to give some sort of meaningful review of how it rides. I was so nervous that just hanging on and keeping my mind on what I was doing really commanded most of this motorcycle virgin’s attention. That, and I really have nothing to compare it to. I’ve never ridden a Harley Sportster. It’s such a different riding experience to riding a scooter. Not better or worse, just different. I can say that the Bonneville is incredibly smooth. The power starts low and the torque just pours on eagerly as you open the throttle. The Bonneville’s 865cc DOHC parallel twin was buttery smooth. That feeling of “hang on!” acceleration I got from twisting the throttle made my eyes go huge and my smile go wide. So much fun.

Above all, the Bonneville is comfortable. Such a fantastic cruiser. The seating position for all 6′ 4″ of me was just perfect. The Bonneville is also forgiving. It would tuck into turns very nicely, but always with so much reassuring stability.

Returning safely to MotoPrimo after about 15 minutes, I dismounted the Bonneville and returned the keys. In the end, I knew my first motorcycle ride definitely wasn’t my last. To this day, I think that there’s a Bonneville in my future. With its authentically classic lines, its very reasonable price ($7299 as ridden), its British sensibility, and the ability to mix and match Thruxton parts at will, I just can’t think of anything I’d rather have in a sporty cruiser bike. I want to ride more motorcycles and I’d really like to ride a classic Bonneville back-to-back. Bottom line though, I think there’s a Bonneville in my garage’s future. Hopefully it won’t get in any mods vs. rockers fights with my Vespa.