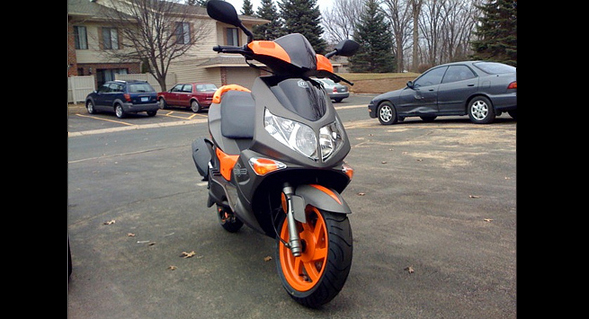 In my opinion, the Genuine Blur 150 is one of the finest scooters available anywhere. Period. In the seven months I owned my Blur, I rode a little less than 5000 miles. During that time, I rode on surface streets, on the freeway, on twisty roads, on hills, in traffic, and out on the open road all by myself. I pushed it to its safe and reasonable riding limits and that riding experience will probably be forever the benchmark in how I grade the performance of every scooter I’ll ever ride.

The Blur is brilliant in two areas in particular, handling and braking. First the brakes. With dual-piston disk brakes both front and rear, the Blur stops in ways that has pretty much ruined every other two-wheeled vehicle I’ll ever ride. Not only are the brakes nice and grabby, I don’t recall ever once locking up the rear wheel. It’s like the braking power is just bottomless. In fact, the worry on the Blur in over-braking is not in locking up a wheel and skidding, but in braking so hard that you fly off the front of the bike.

The Blur’s magnificent handling is thanks to its 13″ wheels and six-point rear suspension. I have yet to see this center-mounted shock setup on any other scooter. This surprises me, actually. Every scooter has a handling disadvantage from the get go. The unsprung weight of the engine and transmission built into the rear swing arm hinder the suspension’s ability to react to the road surface. The six-point rear on the Blur overcomes much of this disadvantage by cantilevering the engine weight and concentrating the dampening in the center of the frame. This also helps the Blur have a nearly perfect 50:50 front to back weight distribution. Most scooters of this size and smaller feel a bit arse-heavy, if not very arse-heavy. This makes their front end darty and also makes it tougher to hold a deep lean through a curve. The Blur tucks in with so much poise it makes you feel like you could take on a Moto GP race.

The 150cc 2-valve SOHC 4T powerplant was more than adequate to get me around town. I could easily outrun any city traffic that wasn’t trying to outrun me. I installed 11.5g roller weights in my variator (down from the 14g stock rollers) and this put the Blur perfectly in its power band any time I needed to accelerate, but without killing the top end or over-revving the engine. But in the end, I was always wishing I had just a little more power and just a little more top end. The Blur, at least with me on it, just wasn’t quite freeway worthy. It was completely topped out at about 65 mph. On commuter freeways, having no passing power at those speeds just isn’t safe. Also, getting traffic-busting acceleration out of the Blur took just a bit of finesse, even with the rollers in. A 200cc, a 4-valve, or even just a liquid-cooled version of the Blur would just be magnificent.

The Blur is also a winner on looks, at least in one respect. It’s not trying to look like a classic Vespa, but it’s not trying way too hard not too look like a classic Vespa. As sports scooters go, once you peel the fireworks stickers off the side of it, it’s a nice clean look. That said, sports scooters really aren’t my thing. I bought this bike for how it rode, not how it looked.

Now for the downsides. The Blur misses badly in two key areas: comfort and telemetry. First comfort. The Blur is setup awkwardly in terms of seat height and foot boards. The seat height is a tad high for most riders, meaning that shorter riders will have to lean over at stops or won’t be able to safely ride at all. This would simply relegate the Blur to taller riders, but there’s a catch. The footboards are way too high for the seat height. The net effect on my 6′ 4″ was a goofy riding position where my feet were way too high and I was pretty much always riding around on my tail bone. The sculpted Blur saddle is soft and comfortable, but no amount of padding will undo that riding position. After about 20 minutes, it got uncomfortable. After an hour, it was downright painful. This was bad enough to make me ultimately sell the scooter. If you’re somewhere between 5′ 10″ – 6′ in height, then you’ll probably be fine. But for me, I just couldn’t take it anymore.

The other major Blur miss is its telemetry. With all the precision engineering that goes into a bike like this, it’s simply astounding that they can’t produce an accurate speedometer or odometer. I don’t just mean that they’re slightly off. The Blur’s odometer reads about 1.68 clicks per actual mile. So for every actual mile I traveled on the Blur, the odometer read around 1.7 miles. I know what you’re thinking. Must be kilometers right? Nope. It’s 1.609 kilometers to the mile. Closer, but still not right. The speedometer wasn’t any better. Based on numerous rides by those radar “your speed is:” police robots, the speedometer was as bad as 15% off at some speeds. I’d ride by at an indicated 45 mph, and really be doing something like 34 mph. Ridiculous.

All in all though, if you’re looking for a scooter in the 150cc range that you can ride like a crazy person and you aren’t looking for classic scooter looks, I have yet to see anything to even approach the Blur. They can be hard to track down, since they’re no longer imported new into the US, but I’d recommend the Blur to anybody who can fit on one. The brakes and suspension alone are more than enough to overcome its other shortcomings. I really don’t think there’s a better scooter out there for less than $4000.

The Genuine Blur 150 really is one of the best scooters in the world. They race them in Asia. Need I say more?

UPDATE: I realized that I forgot to mention gas mileage. During my time riding it, my Blur consistently got between 63 and 73 mpg. Mileage fluctuated a lot, as it does on any scooter, but that was the reliable range. Not bad at all as anything over 60 mpg falls fast victim to the law of diminishing returns and doesn’t really make much of a difference in terms of overall fuel costs. Even with $4 petrol over the summer, my average operating fuel cost was about $0.03/mile. Not too shabby.