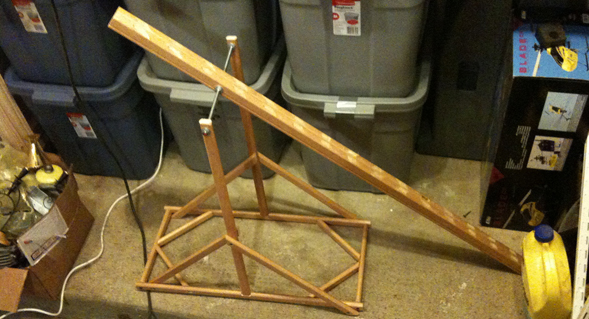 For my birthday this year, my gift to myself was taking the day off of work. With that time all mine, the trick was figuring out what I wanted to do with myself. My car conundrum is not yet resolved, so I wanted to drive a Honda Insight and a VW Jetta TDi.

The Honda was very interesting and obviously very advanced, but like all Hondas, was seriously lacking in soul. The Jetta TDi was shockingly powerful and pretty fun to drive. I can’t go so far as to call it sporty, but it definitely has more character than your average small sedan. Both were interesting, yet neither were compelling enough to open my wallet. The other b-day activity I wanted to undertake was to make something. Anything. I miss making things with my own two hands. The online DIY community, the Maker movement, and especially Mythbusters has really inspired me to make making much more a part of my daily life. But what to build first? I’ve always loved the trebuchet, an ancient, elegant, and imposing siege weapon. I’ve seen full-scale replicas that throw pianos and have always wanted one of my own. A few weeks ago, I noticed this kit from ThinkGeek.com. I almost bought one, but then thought “I could just build one.” I tucked that into the back of my mind and then on Monday I noticed that one of our neighbors was throwing out a broken crib. The particle board slats were perfect and plentiful, plus the longer pieces would make a perfect throwing arm. So armed only with scrap and a few hand tools, I constructed my very own miniature flinger of doom! The only bits I had to buy were odd nuts and bolts and a small door latch I used for the release mechanism. It’s just perfect for hucking tennis balls or golf balls. It’s my own slice of medieval history and in ancient scale goodness, it’s even powered by tiny boulders. I’m still dialing in the sling, as the release point is still very late, but it’s lots and lots of fun.