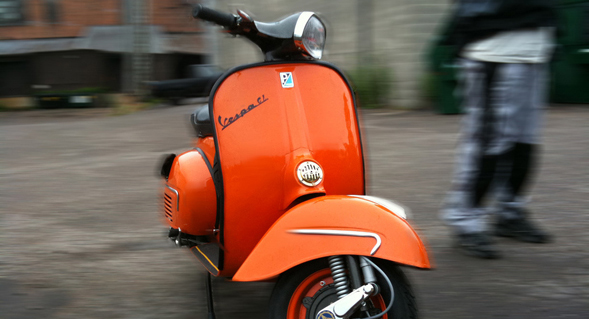 June 20, 2009 — Today The Mrs and I got together with a handful of other scooterists for a fresh installment of what was the highlight of last riding season. We met Joe — aka “Kennylibido” — at the Square Peg Diner in Minneapolis for the first of many test rides of the route for the “big ride” at Rattle My Bones this year.

This serves a couple of purposes. First, we’ll ride the route to make sure it’s adequately simple, scenic, and lengthy. The route will get tweaked a few times and then locked in. Once the route is set, we’ll ride it at least a half dozen times to familiarize the core blocking crew with what intersections we’re going to have to “lock up” in order to get a mile long caravan of scooters through without incident. And lastly, it’s a great excuse to get together with really good riders and run a nice tight formation over a long route.

Our route today was about three and a half hours — about 80 miles according to Joe. Weather was a little sketchy, with periods of drizzle throughout and the overall cloudy gray motif. It didn’t outright rain on us until The Mrs and I were on our way back home. We shed riders here and there as the ride went on, and had one incident of a flat tire. Thankfully, a spare was generously offered up by another rider in the group.

High points
Riding a great route most of which I’ve never ridden before. It just re-emphasized how much great urban riding there is in the Twin Cities. Also, seeing Doug’s gorgeous new orange Vespa GS. That guy knows how to spend the winter. I thought it would be difficult to top his hot rod caliber red Vespa Allstate 90, but his GS definitely does. Also, one of our compatriots rode a Piaggio MP3 250. I was riding stagger just behind her and watching that bizarre front end do its thing was really, really interesting.

Low points
Getting rained on sucks. Period. It didn’t rain that hard and we didn’t even really get wet, but the wet road just kills my confidence in the road grip. It’s not that big a deal, but it’s just not fun at all.