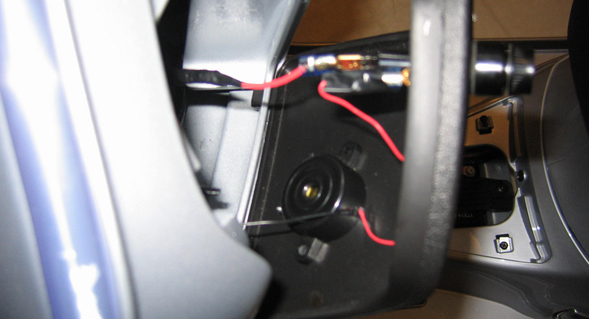 I have but two simple complaints about my new Vespa Grantourismo. One, that the slightest overfilling of the gas tank sucks fuel into the intake track. And second, that you don’t get any auditory clue when your turn indicators are up and blinking.

Leaving your blinkers on accidentally sends the wrong signal to vehicles and can easily get your arse run over. There’s the dash lights, but the attentions of riding keep my eyes off the gauges for the most part. I’ve taken to over-canceling the switches and more than once I’ve canceled my turn before actually executing it. I had the same problem in my 1979 Vespa P200E. My fix then, as it is now, was to wire a simple buzzer into the turn indicator electrics. For about $5 in parts, I’ve added a nice level of riding safety.

I’d wired a set of these before, but thanks to this post on ModernVespa, I found slightly better way to wire them. The circuit is actually pretty simple. On the GT, I was able to wire the whole thing through just the body openings for the indicator lenses and the opening behind the horn cover — that is to say, I didn’t need to remove the glove box or the rear cover to the leg shield.

Wiring and mounting
What we’re creating here is essentially two one-way circuits that share a common ground wire. The diodes let us wire both lenses to a single buzzer. Without the diodes, current would backtrack to the other indicator light and you’d get both lights at once, which sort of defeats the whole purpose. The alternative would be to wire a buzzer into each light, but that’s a waste since about $0.65 worth of electrical parts lets us have a much simpler circuit. 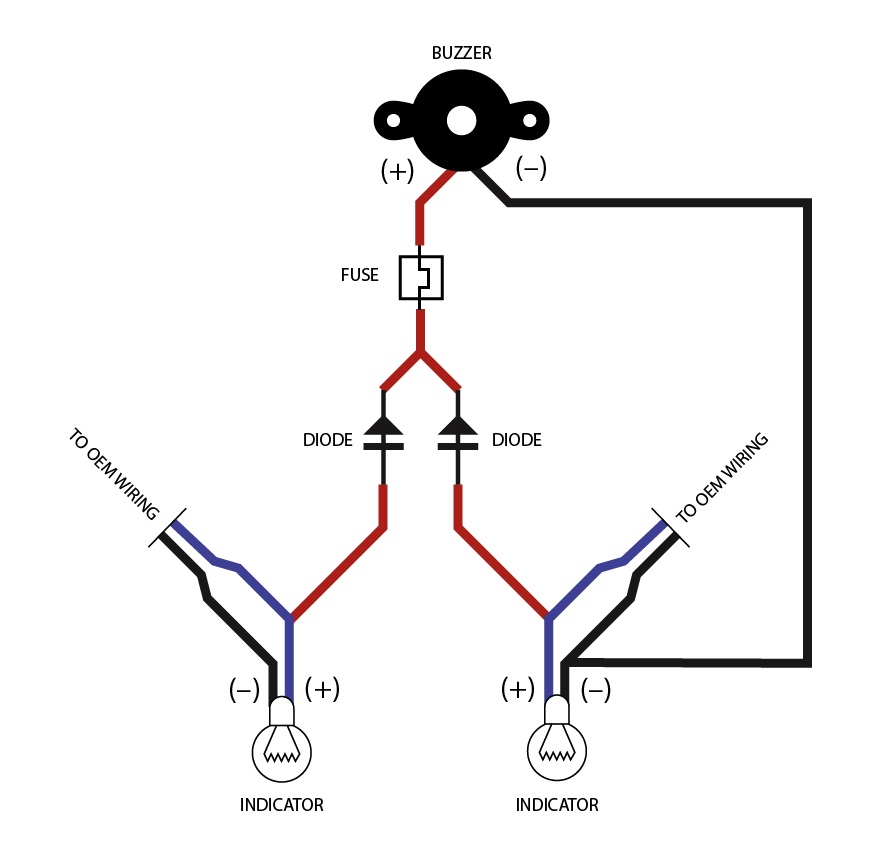 I mounted and wired the components as I went. Starting with the fuse, I drilled a 1/2″ hole in the knee pad to accept the fuse holder. You need not do it this way. This was simply the fuse holder I had left over from my old Vespa. I mounted it externally, that way if I do blow a fuse I don’t have to take anything apart to swap it. This left side pad panel is ideal for these kinds of mods since there’s nothing underneath it. The right side pad panel houses the coolant reservoir, so best not to crowd anything in there if you don’t have to. After attaching the fuse holder, I hot-glued the buzzer to the backside of the panel. Even though it’s on the inside of the panel, it’s plenty loud to be heard over engine and road noise and even when wearing a full-face helmet.

When wiring the diodes, keep in mind that they are directional and that direction is indicated by the stripe on the barrel of the diode. In the case of this circuit, you can actually face the two diodes in the same direction and solder their downstream leads together. Make sure the stripe is pointed toward the buzzer and you’re golden. Then run two separate red leads, one from each of the separate upstream leads of the diodes. These will connect to the positive (colored) wires on the OEM indicator light wiring. You’ll also need to extend a black ground wire. This will connect into the black ground wire in the OEM wiring, but it need only connect on one side. It’s also a really good idea to use a multi-meter to check for continuity as you go. Or at the very least, be sure to check your assembled wiring before you install it into the scooter. Also remember that since you’ve got diodes, the polarity of your testing wires will actually matter.

Splicing into the OEM wiring is not too tricky. Peel back the black tape the covers the wires until you’ve got a good 3″ of wire away from the connector. You’ll be splicing both wires on one side, and only the “hot” or colored wire on the other. Be sure to leave yourself enough room so that the rubber boot can slide back off of the connector enough to connect and disconnect the lens without putting stress on your splices. Insulate everything thoroughly with shrink wrapping or electrical tape before reassembling and reinstalling the lenses. Make sure to swing the handlebars back and forth and be sure everything has enough slack. Also be sure to secure the long wire over to the right side indicator somewhere along the way with a cable tie.

Troubleshooting
All that’s left is to test. Reconnect your battery. Turn the ignition to on. Listen for fuses blowing and keep your nose open for anything that smells like hot wiring. If you see smoke, or smell something out of sorts, turn the key to off and disconnect your battery before you go looking for the hot wire.

If you’ve hooked everything up correctly, you should get a surprisingly loud beep with each pulse of the turn indicator. If your indicator lights don’t come on, then you’ve either got a short in your splicing, or you’ve blown a fuse. Check both. If both lights come on together, then your diodes are either shorted upstream of each other or aren’t installed in the correct direction. Stick to the wiring diagram and you should be good.