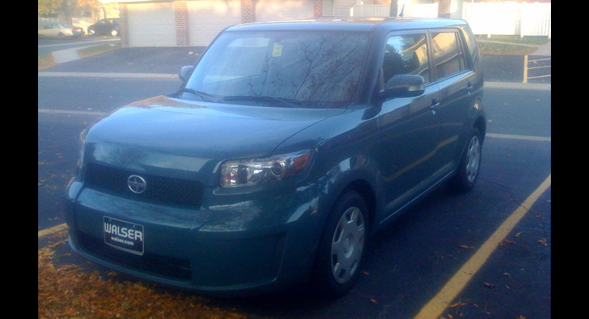 The small car segment in America is in quite a state of flux right now. Used to be that compact cars were as unequipped as they were unsafe. The concept of a premium or even a luxury small car in America was completely foreign. More accurately, it was european. But in the last few years, the segment has really expanded. The BMW-bred MINI reboot in 1999 and the introduction of the Cooper to the US in 2001 marked a turning point in the segment. Here was the smallest production car available in the market, and not only was it efficient and safe, it was sporty and nice.

The MINI Cooper S and the Clubman followed, but more interestingly, the small car offerings in the US market at large got much better. The premium small car market since then has only really seen the introduction of the Volvo C30 and later the 1-series BMW. Premium small cars aside, the regular small cars available in the US simply got nicer by default. A great example of this is Scion’s redesigned 2008 xB. My wife just recently leased one to replace her petrol-chugging pickup truck, and we both really like it.

I didn’t particularly want to like this car. I was more interested in the Toyota Matrix. I liked the look of it better. I liked how the seats folded down flat and the nifty orange color it came in. I also liked the Honda Fit for similar reasons. But once we both drove the xB, we were sold. It is quieter than the Matrix, it’s significantly bigger than the Fit. Though the Fit gets better fuel economy, availability can be an issue and the xB is significantly larger and more comfortable. It’s got more pep and I dare say more personality. I wouldn’t go so far as to call it character, like my MINI has, but personality for sure. I think the previous generation of the xB was a better looking, more interesting car, but this new incarnation is neither ugly nor boring.

The 2.4L VVT-i engine, at 156 bhp, produces hardly ten fewer horsepower than my MINI Cooper S and the same torques at 162 ft/lbs. This makes the xB pretty quick for what is by all accounts an economy car. At 3020 lbs, it’s not portly, but not trim either. The 5-speed shifts smoothly, although the engagement point on the clutch is pretty narrow and I’d like more weight in the feel of the gear selector. It’s surprisingly easy to drive the xB aggressively. The engine is quick-revving and has a nice growl to it that rewards a well-matched downshift with a pleasant snarl.

The xB rides comfortably, and feels very sure footed for a car that simultaneously feels so tall. It soaks up road bumps much more comfortably than my MINI, but still turns in well and stays composed without a lot of drama or exorbitant body roll. The ABS brakes are more than adequate, although hardly sports car caliber. Traction and stability control systems are standard on the xB, as are a plethora of airbags. Cruise control and iPod integration are also standard on the new xB.

The interior is clever, but without trying too hard. Visibility is great, with no real blind spots. You’d think those wide C-pillars would get in the way, but they really don’t. The seats are standard economy Toyota fare — not uncomfortable, but hardly premium or plush. Were the ride less comfortable, I think the seats would wear on my body on longer trips. The four center-mounted gauges offer ample information to driver and passenger alike, and the xB even includes an onboard computer showing average fuel economy, real-time fuel economy, average speed, outside temperature, current time, and time spent on your current drive — features I had to pay extra for in 2006 on my MINI. Your speed is displayed in huge LCD numbers like an alarm clock. Can’t say I’m crazy about this. A dial is quicker to interpret at a glance. The driver’s seat has a goofy little inside arm rest that’s pretty much useless and could do with much more lumbar support. Also, the accessory power plug-ins are down at the base of the dash, meaning that you’ll need pretty long chords if you want to mount a GPS or a radar detector even to the base of your windshield.

The Pioneer stereo is another nice touch in the interior. The sound is great, as are the steering-wheel controls. My one complaint is that you’ve got to spin the volume wheel about 4,000 revs to dent the volume up or down. This eliminates that annoying spot between too loud and not loud enough, but at the expense of being able to simply reach over and turn the damn radio up or down with one flick of your thumb and finger. The iPod integration is standard, but hardly stellar. The standard AUX port will likely see more iPhone/iPod use in the long term.

Overall, our first and continued impressions of the Scion xB have been very favorable. In-town mileage, at 24-26 mpg, has been a revelation over the mrs’ former Tacoma. Every time I hop in the xB, I like driving it. It’s comfortable and feels very solid and reliable. It could be nicer. Some alloy rims would be a nice touch, as would the rear spoiler. But overall, the xB is an economy car that is much nicer than I ever expected it to be. At the end of our three year lease, I imagine we’ll probably be pretty tempted to go ahead and purchase it.