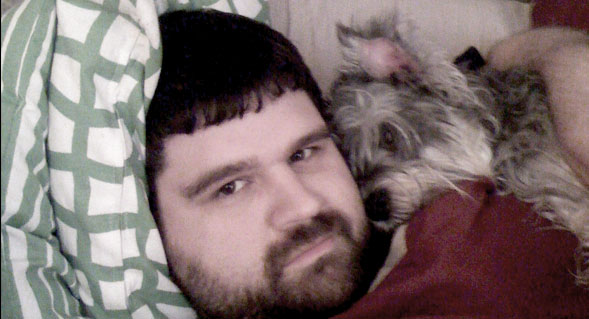 I’ve had an uncommon cold for the better part of a week now. Fever, aches and olympic levels of snot. It’s been a little over two years since I’ve been this ill. This cold is passing, but two years ago was walking pneumonia. Nasty, nasty stuff. What makes it a story worth telling is the kindness of a grocery store manager I’d never met.

Two years ago I lived alone here in Minneapolis with my awesome little dog, Henry. I was engaged to The Mrs, but she was still living in Nebraska. My folks visited for the weekend and I felt fine until Saturday night when for some reason I couldn’t get warm for the life of me. After a shower, I seemed to normalize and was able to get to sleep. I woke up on fire, yet freezing still, soaking in a pool of cold sweat. The parents headed home the next day. I was sure this would be fine — a simple cold.

Two days later I was worse. I downed water by the liter, was turning orange from vitamin C intake, but it didn’t seem to make a difference. I felt awful, but not quite awful enough to go to the doctor. That, and I didn’t have a doctor. I’d only lived in the Twin Cities for a few months and barely knew my way around my suburb. Convinced I had the flu, I thought my salvation could be found in a few hot cups of TheraFlu. That was troublesome, though. I didn’t have any. I was also delirious and driving was out of the question. I knew about three people in a 300 mile radius. I called The Fiancee and she wondered if I had a nasty fever and should go to the doctor. I didn’t have a thermometer either. Somehow in my hot and bothered stupor I knew that a thermometer was the answer to my situation. I had an idea that if I could find a grocery store that delivered I could get my hands on some medication and a thermometer and would either feel better, or know for sure that I needed to call somebody and get my butt to a doctor.

I called one local chain grocery called Rainbow Foods. I explained my situation, and the woman on the other end informed me that they didn’t do deliveries. That was that. I called Cub Foods, another local chain. The fellow that answered the phone listened carefully to my story.

“What is it that you need?” He asked.

“Um, what I really need is some TheraFlu and a thermometer.” I probably wasn’t quite that coherent, but he got the idea.

“We don’t really do deliveries, but my shift is over in about 45 minutes. Can you wait that long, you think?” he asked, to my elation.

“Yeah man, that’ll work. Thank you so much!”

I gave him my address and true to his word, he showed up about an hour later. He looked to be in his early 40s, textbook midwestern guy, with a paper bag of salvation in hand. I wrote him a check and thanked him profusely. It wasn’t until I took my temperature that I realized just how much I owed this stranger. I’d felt this way, this hot and bothered, for about three days at this point. My temp read just a shade under 105º. No wonder I felt like garbage. Time to see a doctor. I called The Fiancee and she called a mutual friend of ours who graciously agreed to take me to Urgent Care.

In short, I learned a lot about fevers (and about why I should be taking massive ibuprofen dosages) from the doctor on duty. Turned out I had a little bit of fluid in my lungs. “Walking pneumonia,” he called it. “Barely-walking pneumonia” if you ask me. He prescribed a regimen of powerful antibiotics and sent me on my sweaty way. Within 24 hours, I felt worlds better. The day after, I was back at work, although it took about a week for my internal temperature to get back to normal. The last piece of advice the doctor gave me was to be careful in the future, as apparently once you’ve had pneumonia once, you’re more susceptible to it in the future. Thankfully that’s not the case this time. The Fiancee insisted on coming up for the weekend to take care of me. She did. She’s awesome.

As I think back on it today, between blowing my nose and coughing up unmentionable substances, I can’t help but wonder if that guy didn’t in fact save my life with his simple act of kindness. He definitely crossed the line from extraordinary customer service to genuine act of human compassion. But I suppose if there is a business lesson to learn, we’ve spent thousands of dollars at that Cub store since that day. I don’t remember his name, but as we left Cub tonight after picking up cough drops and other cold remedy stuff, I couldn’t help thinking of him.