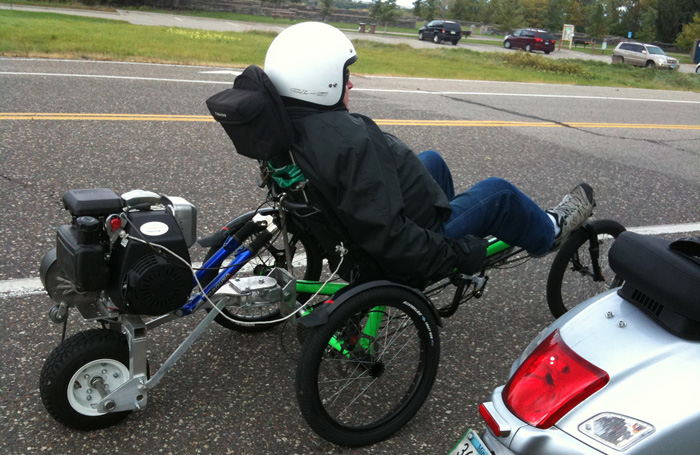 October 4, 2009 — Today I went for the best ride I’ve had all season. It wasn’t a long ride, only about an hour. What made it such a great ride was two things: I met someone interesting, and I rediscovered a great stretch of scenic road.

I’ve been stuck in the house with a cold since Wednesday night and hadn’t been on my Vespa since last Saturday. I was itching for some road time. Weather was in the 50s. That’s just cool enough to separate the casual riders from the enthusiasts. Specifically I wanted to investigate Lilydale Road —  a scenic looking side road I’d seen on last Saturday’s ride up Sibley Memorial Highway.

As I waited for the turning arrow at the junction of Highway 13 and SMH, I saw something remarkable across the intersection. I saw something that had seemingly jumped out of the drawing board in my head and on to the road. It was a recumbent trike retrofit with a small gasoline engine. I couldn’t help but wave at the guy and give him a hearty “you rock” gesture with my two outer fingers extended. He laughed and returned my wave. My arrow turned green and I pulled off to the side of the road after making my turn. He pulled over too once the light let him through the intersection and we chatted about our respective rides. His was just DIY fantastic — a brilliant assembly of mostly off-the-shelf parts and a few simple pieces of custom aluminum. He told me about a number of different tinker projects he had going on and the genesis of this one in particular. Apparently, depending on what final drive sprocket he uses, he can get this machine up to 60 mph with the 140cc Honda engine he’s using. Today he had his “40 mph” sprocket installed and was out for a quick cruise after a tire repair curious how well it would climb hills.

He was as much a character as his machine. “I’ll show you.” he said as we pulled away from the shoulder. I’d place this gentleman in at least his 60s. He had mischievous retiree written all over him. We cruised a couple miles and I had so much fun watching his machine do its thing. The rear wheels of the trike had a healthy amount of camber on them, which seemed to really add to stability in the corners. The engine and drive wheel trailed behind eagerly — creating a look that was instantly recognizable as DIY — but really well executed DIY. Most noticeably, the little trike just seemed to get on effortlessly. At no point did it seem like he was hanging on for dear life or having to wrangle it into doing something it didn’t want to do.

We stopped and chatted again and he told me some harrowing tales about a broken throttle cable. The disk brakes weren’t enough to overcome the power of the motor, and he finally had to find his way up onto the sidewalk and ditch it into a hedge. He told this story all too nonchalantly. Great guy, great machine. It’s not exactly what I have in mind to build, but it has my mind racing with possibilities.

The second great part of the ride was Lilydale Road. I soon recognized it as part of the Rattle My Bones history ride route from a year ago. It’s an isolated but smooth little two lane that much to my surprise opened up into a fantastically scenic little river lane. A tunnel of trees gave way to a colorful panorama of the opposite bank of the merged Mississippi and Minnesota rivers. It wound its way along the river and inserted me into downtown St. Paul as though through a secret entrance, right next to the St. Paul Yacht Club. That fabulous route, plus my new tires, equalled total riding bliss. With the St. Paul riverfront sprawled before me, I was pleasantly satisfied with my outing. It was chilly enough and I’m still runny nosed enough that it was time to head home. I retraced my tracks and this little stretch of road is my new favorite route. I’m going to make a point of riding it as much as I can before the end of this riding season. Anybody want to come along?