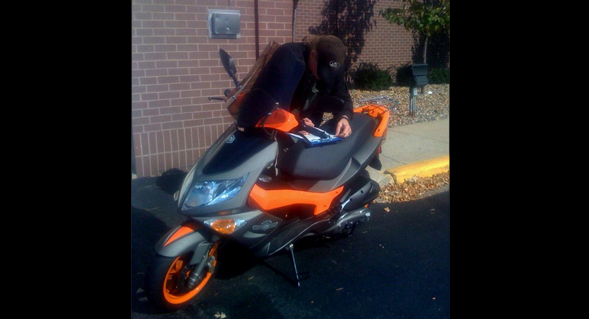 I bought my first scooter not quite a year ago. It was a 1979 Vespa P200E. I loved that scooter, at least until I started riding it regularly. After a winter of working on it, looking at it, falling in love with the lines and its aircraft heritage and italian sensibility, I finally rode the thing for a couple months. Love and hate. Loved the look, and the handling wasn’t bad. Hated having to shift gears while learning to ride on two wheels, and soon learned that the brakes were mostly for show. I remember one particular ride in late March where I realized that if I were on a twist-and-go scooter, I’d be having worlds more fun.

A week later, I sold the Vespa and bought a Genuine Blur 150 on the recommendation of David Harrington and local ModernBuddy.com buddy, EP_scoot, who both have one in their garage. At first, I loved the Blur. It was so smooth, the brakes were magnificent, and the power was about the same as my P200E. The riding experience was a huge improvement over the P200E and I fell in love with scooting past the point of no return. But over time, what I thought I could live with in terms of imperfect ergonomics got to be, literally, a pain in my ass. As much as I loved the way the Blur sounded, handled, and usually sped away from traffic, after about half an hour my arse usually started hurting.

So after a season and a rally putting up with being all scrunched up on an otherwise fabulous scooter, I had an ephiphanal moment that reminded me very much of that cold March morning when I realized it was time to sell my Vespa P200E. The Blur had to go. It needed to go to somebody who actually fits on it. I was starting to resent the riding position and it made me not want to ride at times. That was unacceptable. So my search for a better scooter fit began. I came across an Aprilia SportCity 250, which is a brilliant big-wheel scooter from the Piaggio group. With a target in mind, I put the Blur up for sale over the weekend of the RMB rally. I figured it’d be easy. The Blur is rare, fantastic, and in consistent demand online. I figured I’d sell it quick and get that Aprilia.

To my abject amazement, the Blur didn’t sell. Weeks went by. It didn’t sell. The Aprilia I thought I wanted, however, did sell. Just not to me.

Six weeks go by and out of the blue, I get a phone call from a guy called Dave. He wondered if my Blur was still for sale. At that point, I’d resigned myself to simply getting the seat restructured and professionally recovered. I had given up on selling the Blur this season and thought I’d just make the best of it. Dave and I had a very candid conversation where I told him that if he was into it, I’d love an excuse to upgrade to something that fit me better. Long story short, Dave bought my Blur last week. Now I had fresh cash burning a hole in my pocket like a nuclear fuel rod.

Having asked around on the boards, and especially at the recommendation of people I trust down at Scooterville, I had pretty much made up my mind that I wanted the Vespa Grantoursimo 200L. The reasons were these:

More than anything, I wanted to reconnect with all the things I loved about my P200E yet retain the positive characteristics of the Blur. I wanted to fit on my damn scooter, but also enjoy actually riding it. I wanted that classic look back. I wanted a proper scooter.

So this weekend, I took delivery of a shiny new 2008 Vespa GT. Today is my third day of riding and I just LOVE it! The power is amazing, the handling is nice and responsive, and it’s just so much more comfortable. It’s so nice to be back on a pure scooter again. The Blur wanted too much to be a sport motorcycle. The GT feels exactly like I imagine a scooter ought to feel. It also looks like a scooter ought to look. It’s so quintessentially the modern evolution of that P200E I fell into and out of love with last year. I fully expect that this will be the last twist-and-go scooter I need ever buy. Not my last scooter, mind you…