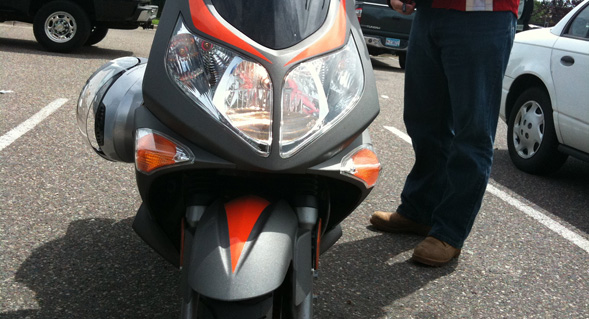 August 9, 2009 — The big ride is less than a week away! I, for one, am stoked. This will be my third year attending Rattle My Bones and this year I’m that much more involved. Back in 2007, I didn’t even own a scooter yet, but I payed my $25 for the opportunity to experience scooter culture first hand and get owners’ perspectives on the bikes I was interested in. Last year, by virtue of the crowd of scooter nut jobs I fell in with, I got roped into blocking for several of the rally rides, including the big one. This year I’m looking forward to doing it all over again. I’m even organizing blocking for the Friday history ride. With the event quickly approaching, Joe wanted to run blockers through the 60+ mile route one last time and identify those tricky intersections. The email went out to the whole group of about 20.

Last year we had at least a dozen or so people on some of the check rides. This is kind of disconcerting. I’m sure people will jump in day of and help out, but it makes a big difference to know where the heck you’re going. I suppose that’ll be part of the adventure this time ’round.

We ran the route once again and I do like it more and more each time we do it. This is a much easier route than last year’s winding, 75 mile trek through the Grand Rounds and around Lake Minnetonka. Although I must say, for all its complexity and what seemed like 1,000 intersections to block, you just can’t top those two staples of Twin Cities riding. When I’m looking for a great route to ride, those or the first two routes on my list. But for the rally, it’s not really about the route at all. The big ride, as organizer Kent Aldrich will readily admit, is about spectacle. It’s a parade. It’s a mile-and-a-half long snake of buzzing scooters completely taking over the road for a few minutes. The average speed of the ride is going to be about 25 mph, which is what we ran the route at today. It takes a while, but that’s kind of the point. It’s going to be so much fun. Part of me wishes I could just take it easy and be part of the pack, but the thrill of zipping past the group 40 mph faster is just too good to pass up.

High points
The highlight for me was Diego and Santiago both showing up on their Genuine Blur 150s. I rode a Blur last season, and save for the awful saddle on it, it’s one of the most brilliant scooters available anywhere. I have no regrets about my switch to my Vespa GT, but seeing not one but two Blurs in our group was oddly emotional. I like to think that machines have some sort of spirit. Not a soul, per say, but some sort of fabulous energy that comes from so many components coming together by someone’s design to do a specific thing. The Blur is definitely that way — any scooter, really. Hearing that familiar exhaust note each time we left a stop — then especially a couple times when Santiago went flying past me in fast turns — it was almost like seeing an old, estranged friend or even an ex-girlfriend. It didn’t make me want to trade back, but it did make me wish I could have both — especially when later I found out that Genuine is bringing over a 220cc EFI version of the Blur.

Low points
The poor turnout. Sure, it was still a fun ride, but I’m just hoping that we have enough actual blockers come Saturday. If we have the 230+ riders we had last year, we’re going to need them.