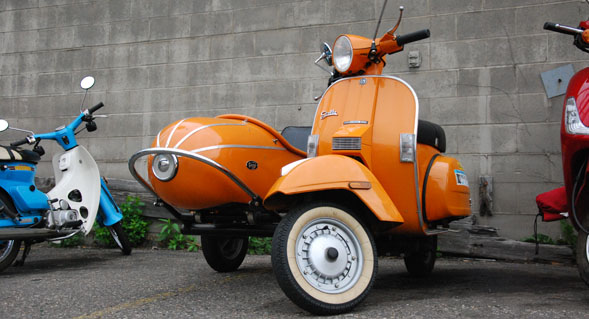 August 14, 2009 — For each scooter season here in the Twin Cities, there is one event that defines the year: Rattle My Bones. This year was no exception. The last three years have really — at least in my opinion — been extremely good events. The first year of RMB was also my first time attending a scooter rally. I didn’t even own a bike yet, but still had a great time. I couldn’t believe there was such a thing, let alone that it included stuff like gymkhana, paintball jousting, or hundreds of scooters of every make, model and decade. Last year I learned the pure adrenaline sport that is ride blocking. This year was all of that and more.

I only attended two of the rally’s four days, which is what I’ve done every year. The rally technically starts on Thursday night with a cities-wide scavenger hunt. I’m not from this area, so my ability to find obscure landmarks is not going to be even remotely competitive. So my rally always starts on Friday with the history ride. This year John took us to two great locations: the Sibley and Farbough homes and historical Fort Snelling where the Mississippi and Minnesota rivers meet. We went to these locations last year as well, but this year we got guided tours at both locations. Very cool. I know that historical sites aren’t everybody’s cup of tea. But our group of 25-30 scooters had a great time reliving the early days of Minnesota.

Like last year, I helped block this ride as a warm up for the big Saturday ride. It was good practice — took me a few intersections to get my rhythm back. Soon enough though, it all came back to me. Decked out in orange, flag waving off my mirror, zipping by the caravan of scooters — it’s a rush. After our tours, hundreds of scooters gathered at Scooterville for the four separate Friday night rides: vintage, modern shifter, twist-and-go, and virgin groups. I arrived at Scooterville a while before the action. I wanted to see everybody trickle in. I wasn’t disappointed. Soon the place was overrun with scooters of every stripe. Fabulous. My favorite was Kent arriving on his 1957 Triumph Tessy — and he didn’t just have a great vintage scooter, he had an outfit to go with it. Each group left with a handful of blockers and made their way to the 331 Club. My favorite part of that ride was crossing paths the other groups here and there as we made our way to 331. Blocking was a challenge, with just a couple of us per group, but thankfully everybody made it without incident. There was food, there were shenanigans, everybody seemed to have a great time. The Mrs and I took off relatively early to tend to our pups, but I figure the party went on well into the night.

August 15, 2009 — As far as I’m concerned, Saturday is the rally. It’s breakfast at Square Peg. It’s the big ride. It’s the Gymkhana. This year did not disappoint. Seeing a parking lot full of scooters is always highly entertaining. Joe, our fearless ride leader, asked me to give the rider briefing. We reviewed hand signals and basic formation, but I think the smartest thing we did was ask everybody to lay off using their horns so that we blockers could use ours to alert the pack to our movements. That made a big difference in our ability to move through the group and keep everybody together. I was greatly relieved to see that our crew of blockers had grown considerably from our check rides. We had a nice little squadron of blockers and with flags flapping and orange vests donned it felt like we were the RAF ready to defend London. The ride went off without a hitch and with very few breakdowns — most notably our illustrious event coordinator, Kent, who was supposed to be our caboose. Thankfully, he was up and running within a few minutes and finished the second half of the ride bringing up the rear.

Just like last year, Blue Cat Motors hosted lunch, the Gymkhana, and the rest of the day’s shenanigans. Lunch was greek pittas and the gymkhana got running right away. I have to give huge credit to Pooter for organizing a great course. Last year, the gymkhana didn’t get rolling very quickly and the obstacles were pretty intimidating. Only a few people participated and one of the obstacles was actually broken before the event got going at all. This year, Pooter took it upon himself to not only get the event going right away, but he built a course that was challenging and that anybody could ride. Folks lined up in droves and several people rode the course more than once. Scooterville’s Steve Anderson gave side car rides to kids during the action. Great fun. The obstacle course was followed by the tractor pull, and then the slow race. Great stuff. I got lots of photos and lots of video. I’m really impressed with the ease and quality of video I could take with the iPhone. Sadly, the paintball jousting got cut off this year when the skies opened up with rain. Folks scattered, myself included, but it’d been a great day regardless.

High points
Oddly enough, the history tour was my favorite part. Don’t get me wrong, I loved the whole event and all the scooter parts, but seeing what was essentially the birthplace of Minnesota and the great collection of artifacts and objects that went with that was just great. I also especially enjoyed meeting new area scooterists and even some readers!

Low points
My only regret in blocking the big ride was that I didn’t get to really do the ride with the group. I was so focused on staying safe and blocking intersections that I didn’t really get to experience the spectacle of so many bikes snaking their way across the countryside. It’s a small price to pay, but maybe next year I’ll only block half the ride.