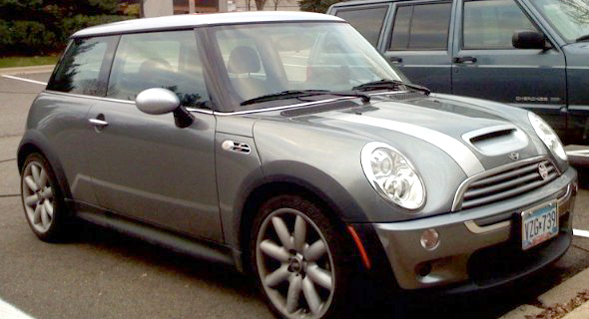 One sunny autumn afternoon when I was about 13, my dad and I were out collecting canned goods door to door as part of a Thanksgiving charity drive. We strolled house to house, our paper grocery bags filling with dusty boxes of mac ‘n’ cheese and squatty little neglected cans of tuna. The sun was getting low in the sky and as we entered yet another cull de sac, I saw something I’d never seen before.

“What the heck is that?” I asked, pointing toward an open garage across the street.

Twenty yards from us was an open one-car garage with a faded blue classic Mini Cooper inside. In the dim light of the garage, I could just make out its squatty little stance and Union Jack roof graphic. I’ve inherited a big soft spot for british motors, as my dad is the original owner of a 1969 MGb GT. Dad talked to the owner about one thing or another, but I was transfixed by this groovy little car and wondered what the hell it was doing in northwest Louisiana. As we left, I was nothing but questions. I was sad to learn that emission standards and bumper height regulations meant that the Mini was only imported for a few years. Still, I was determined that someday I’d simply have to own one.

Flash forward. I’m done with school, working in advertising and design, and the CP+B branded MINI had captivated me even beyond the classic. Here was this car that by my calculations was a near mythical blend of efficiency, style, sport and cheek. What was more, I could just afford one. I’d done a nice long test drive in Kansas City and my mind was thoroughly made up. Unfortunately, I was up against a deadline.

It was 2006, and the car I’d fallen in love with was soon going to drastically change [I strongly felt] for the worse. The R53, Frank Stephenson’s Rover initiated, BMW polished masterpiece was being fiddled with by the bean counters at BMW. The design language of the new car, the R56, seemed to have a bizarre German accent and there were mechanical changes that seemed to go against common sense and good character. The raw roar of the supercharger was to be replaced by the whispy buzz of a twin-scroll turbo. The bulletproof iron block was now a fragile lump of aluminum. More alarmingly, BMW had opted for on-demand electric oil and water pump systems which just seemed like disaster waiting to happen. Then I looked at the interior changes. No. No. No! What the #@$% were they doing to my dream car? That tore it. If I was going to own a MINI, it was R53 or bust.

Long story short, I did some wrangling and managed to order my car — one of the last few hundred R53 MINIs built at Oxford — a dark silver Cooper S with a light silver roof and mirror caps, silver on silver anthracite interior, Premium/Sport/Cold packages, and 17″ rims. Todd Pearson hooked me up with a full custom front end with silver bonnet stripes and a silver hood scoop to match the roof. Gorgeous! I was in love. Not only was it a magnificent looking car, it was more powerful than I’d ever expected and cornered like nothing I’d ever experienced. No buyer’s remorse here. No sir.

Three years later, here I am. In August I come to the end of my three year MINI Select financing term and I have basically two options.

1. Refinance the balloon payment and keep the car.
2. Trade in/sell my MINI and buy/lease something else.

Three years ago when I bought the car, #2 was not an option. I was going to keep this car for 40 years, just like my dad has kept his MG. That was still the plan up until this last Thursday. Last Thursday I had what turned out to be a short in my dash wiring that gave me a false ABS/flat tire warning. Simultaneously, the thermostat housing catastrophically failed and the car nearly overheated. If I hadn’t been watching the gauges because of the ABS warning, I may not have noticed the temperature needle shoot skyward. Thankfully I did notice and shut the car off just as that light came on and avoided doing any damage to the engine.

A call to MINI Roadside Assistance and 90 minutes later, I received the fob to an R56 Cooper loaner car. I’ve had these Cooper loaners before and frankly, they’re dangerous. They’re dangerous because they’re so much more comfortable than my R53. Every time I drive one, I kinda want one. I ended up keeping this loaner for four days while Motorwerks mended my MINI. What was supposed to be only a strictly platonic business arrangement turned into a torrid affair. I fell in love with that confounded Cooper, on/off oil pump, automatic transmission and all.

Not only did this mean that I needed to swallow quarts of my own bile from the comment sections of Motoringfile, but it meant that I needed to seriously reconsider my entire approach to car ownership. Am I willing to part with MY car for something better? Was I keeping my car for the right reasons? Is it even remotely practical or even possible to keep a 2006 MINI running for 40 years? It’s a pretty big brain shift going from “keep it forever” to “drive something else for the next three years or so and then change again.” What’s more, I am tempted hard by the Cooper, not just the Cooper S. The Cooper is so appealing in its little quirky way. The mileage is fan-frakking-tastic, the looks have really grown on me, it’d mean a much lower car payment than I make now, and bottom line: it’s a profoundly more comfortable car. I fit in it better and the ride quality is worlds better.

So yesterday, as I returned my loaner car and picked up my repaired MINI, I stopped by the sales department. They were kind enough to let me demo first a 2009 Cooper, then a 2009 Cooper S, both with manual transmissions. If I made a move away from my MINI, I really just can’t see myself driving anything else but another MINI.

In the Cooper, I worked my way through a small urban area, then zipped up and down 35W for a while. The Cooper actually reminds me a lot of my Vespa Grantourismo. The power is there, as is the speed, but it’s not a brute. It’s swift, but delicately so. When you really know the car, you can wring lots of speed out of it, but not by simply mashing on the pedal. In a lot of ways, the R56 Cooper feels about as powerful and quick as my R53 Cooper S, just minus the torquey power-on-demand I get from my supercharger. The Cooper is an extremely easy car to drive mated to the Getrag 6-speed manual gearbox, and especially so in town. “I could have a really good time in this car.” I thought to myself.

Next I drove the Cooper S on the same route. I’d previously driven an R56 Cooper S on a short demo in 2007 and frankly wasn’t impressed with it. It felt numb and seemed to lack that uncivilized, raw power I could get from my R53. Now that I’m much more used to the R56 platform, I was able to unleash the S for the turbocharged monster that it really is.

Wow! What had I done? Why did I drive this car? I should have known better.

The R56 MCS isn’t simply a little quicker than my R53. There’s a world of difference. The overboost, the giant swell of torque, the rally car growl and the comfortable sharpness of the handling were beyond a simple improvement compared to my R53. At one point I was going state prison fast as the car and I slingshot down the onramp and blurred past traffic. I wasn’t actually trying to go that fast, I just wanted to punch it and see what would happen. Wow. Did I say wow? Wow. Now I’m conflicted. Do I drive the dancer or the monster? I’m not sure how I feel about it yet.

Throughout this process, I’ve been rethinking my whole outlook on cars and my outlook on “stuff” in general. I think that many of us perceive that what we drive can say a lot about who we are if we want it to. A car or a bike or a scooter or how we dress — these are all statements we make about ourselves. That’s not necessarily a bad thing. When those things define us — define who we are — rather than the other way around, then that isn’t healthy, of course, and it’s an easy thing to fall into. We are always communicating something, whether we want to or not. The Prius owner often has as much to say in their purchase as the Hummer driver. They’re just saying different things. For a lot of people, they’re driving a car that says “I don’t care what I drive so long as I get there.” That’s a statement too, and a good one. And really, most people are just driving and don’t give a second’s thought about their car, their clothes, or their 401(k). That’s alright too, and healthy in its own way.

Being unemployed for several months this year put a lot of these sorts of PR notions into sharp perspective for me. What do I really stand for? What are my priorities? What am I communicating to other people intentionally and unintentionally? It’s easy to get all image conscience, but that isn’t the point. In reality, very few people will ever give a crap what I’m driving, and I’m not going to make my buying decisions based on those perceptions really at all. I just know they’re there and want to make sure that what I’m communicating about myself is above all else authentic.

I think the biggest lesson I learned from being unemployed was the value of enough. There is a profound freedom in having only the things your really need and a few of the things you really want. There is comfort in actually living within one’s means. My wife and I recently moved into a smaller apartment. Our previous place was simply more space than we needed and more expense than was worth paying. So we downgraded. We dropped two bedrooms, 1-1/2 baths, 500 square feet, and we absolutely love our new place. It’s just right for us and our mutts. In a lot of ways, I’m thinking that a change to the R56 Cooper might also be just the ticket. Then again, that Cooper S is one beautiful monster.

I’ve got until July or so to figure out this car conundrum. Do I hang on to my car — a car I really do love in spite of its subtle faults? Do I keep my monthly payments roughly the same and drive a beastly Cooper S? Do I save money, embrace “enough” and cruise ’round in a Cooper? Do I depart from MINI all together and lease a Honda Insight or a Jetta TDi? It’s amazing the emotional attachments we make to something as silly as a car, yet here I am, utterly conflicted. This is a fun problem to have, that’s for sure. Definitely a first world problem.