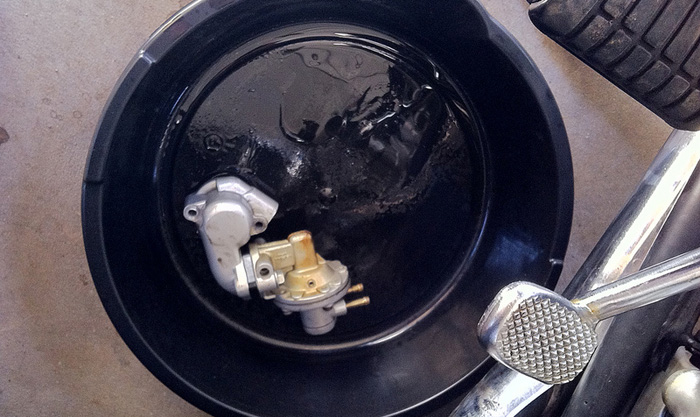 There are really two kinds of motorcycle repair jobs. There’s the bolt-on-bolt-off stuff, then there are the in-depth repair procedures. For me, both are fun in their own way, but the bolt-on-bolt-off jobs are great for near instant gratification. After kicking off 2012 with an inaugural ride of my Honda GL1100, I was really jones’n for a proper motorcycle outing. The Mrs was too. So with the weekend upon us, my task for the day was to prepare her bike and one of mine for an afternoon cruise through northern Chicagoland.

My conundrum however, was which bike in the fleet was actually the most road-worthy. I had two to choose from: my GL1100, and the CB750. Of the two bikes, I prefer to ride the GL, but neither bike was in what I’d consider full road-wrothy shape.

The CB750 hadn’t been summer-ized yet. It’s on older tires. Plus, I was hoping to sell the CB750 soon, so I wasn’t keen to put a bunch of miles on it. I also don’t actually like it that much. The inline four is too fussy, and though the chassis, suspension and brakes on that bike are brilliant, that motor keeps me from genuinely loving the thing.

The GL1100 had run already this season, but it needed some attention before I’d feel like I could trust it. The tire pressure needed checking. It needed a new oil filter. Most importantly, it needed a fuel pump — a common ailment for an old ‘Wing. However, it was the bike I’d rather be riding, so that’s what ultimately tipped the balance. Thankfully, I already had the parts I needed thanks to a couple weeks of scouring eBay. I had two fuel pumps, actually. Both were used, but the two of them together had cost me less than half the cost of a new one. Both were also supposedly tested by the sellers and free of leaks. The current pump on my GL was still functioning, but it was weeping gasoline with every beat of its little heart. It’s a common problem that’s pretty unique to Goldwings, actually, as most motorcycles don’t even have fuel pumps. With their gas tanks located over the motor, gravity is more than enough to supply the fuel system with petrol. On the GL, however, the “tank” is actually the airbox. The real fuel tank is located under the rider’s seat, basically dead level with the carburetors. So only about the top quarter of the tank would gravity feed to the carbs. Enter the Keihin mechanical fuel pump.

The pump is mounted off the trailing side of the right engine bank and is spun by the camshaft. An extra lobe on the end of the cam pushes a little rocker arm in the pump, which drives a diaphragm to move fuel. The pump housing also engages a worm screw on the cam that turns the pick-up for the tachometer cable. Because the pump is just right there, hanging off the end of the engine, I hoped that replacing it would be one of those gratifying bolt-on-bolt-off affairs. For once, I was right. After double-checking my Honda service manual and reading an online how-to, I tore into the assembly. Sure enough, two bolts and it was off — the poor thing slowly turning orange from a steady weeping of gasoline. You rest now, little fuel pump. Your work is done. A quick dab of lithium grease on the cam lobe and worm screw and it was time for the new pump. The only tricky part was rotating the pump so that the rocker arm would slide over the cam lobe. Once that was in place, it was just two bolts (with a small dab of blue locktite on each) and Bob was indeed my uncle. The whole thing had taken 10 minutes. Before firing up the bike to check the pump’s performance, I wanted to knock out the other bolt-on-bolt-off task at hand. The clever chaps at Randakk’s offer an oil filter conversion kit that lets you ditch the stock Honda cage and filter insert assembly (which is a messy pain in the ass) and replaces it with a receptacle for spin-on automotive oil filters. This makes oil changes much easier and, if I’m honest, looks very race track and bad ass hanging off the front of the engine. Because this is a custom-engineered part for this specific motorcycle, installation couldn’t possibly be easier. One bolt removes the old assembly, with a minimal amount of oil spilling out of the old filter housing. Then the new base threads into the OEM receiver. The automotive filter then spins onto that. A quick tightening with a strap wrench and Bob is still my uncle. (I do actually have an Uncle Bob, which makes that phrase one of my favorites) About half a quart of oil to top off had the bike ready for a proving run. Because of its fuel pump setup, its ridiculously complicated carburetor assembly and the fact that it’s an older Honda, my GL1100 has always been be a little tough to start. It’s always required full choke when cold, and always took several turns of the starter to initially fire. Once it was going, it didn’t always stay going. Sometimes it’d sputter on 2-3 cylinders and it wouldn’t settle down until it was fully warm. Only then would the engine be content to run well. Once warm, it’d start instantly without any choke and generally run like a top. I read online that poor fuel delivery could make these old Wings hard to start, so I had my fingers crossed that a fresh fuel pump would make the old beast a little less grumpy first thing in the morning.

That in mind, I was pretty excited to start the engine. Would my 20 minutes of easy wrenching really make a big difference in how the bike ran? Obviously the fuel filter wouldn’t change anything, but I had high hopes for the fuel pump. With the gas turned on and a bit of choke, I gave the throttle a couple of quick pumps to prime the carbs from the accelerator pump. I pulled in the clutch and hit the button. The engine turned over maybe two full turns before the bike fired to life. No smoking, no 3 cylinder sputtering, just smooth running. Hell yes! Feeling extra confident, I opened the choke. The bike idled happily, and as smoothly as if I’d been riding it all day. I grabbed a long screwdriver and adjusted the idle speed. With proper fuel delivery, it didn’t need as much initial throttle to run. I took 500 rpms off the idle and it looked like my hard-starting days were behind me. That’ll do, Goldwing. That’ll do.

I put on my riding gear and took the bike out on a proving run. I was anxious to run the bike through its full jetting range, Trundling through Evanston, I headed for the highway. The new fuel pump made the GL a new machine. Throttle response was sharper, the engine was smoother, and overall there was simply more power there. Since rebuilding the carbs, I still haven’t done the “idle-drop” procedure to set the final mixture on the idle circuits. I’d thought all along that this was why the bike was so hard to start when cold — that it was too lean on idle. With the bike running so happily now, I wondered if the procedure was even necessary. As I blasted up Hwy 94, the GL just sang all the way up into 5th gear and 75 mph. For the first time, the bike felt fully alive — the engine fully healthy.

At one point, I came down an on-ramp to find a semi-truck barreling down upon me from behind. With little merging space, my best option was to bury the throttle. To date, the best description I’ve ever heard for the engine character of a GL1100 is “a jet-powered sewing machine.” That’s dead on. Giving it the beans on that on-ramp, the engine spooled up like a thunderstorm taking a deep breath. With my butt firmly planted in the GL’s bucket seat, I rode the thunderbolt forward with an alarming and delightful amount of force. I’d more than left the semi behind. He wasn’t going to catch me. I quickly turned my attention forward making sure I didn’t strike the back end of the traffic in front of me. There’s something simply elemental about a bike that heavy, with its heavy rider onboard, simply blasting out of the way like that. It’s not superbike fast. It’s not neck-snapping acceleration. The charm of my old Goldwing is the effortlessness with which it makes torque. Sure, that turns into speed, but the smooth brutality of that power is a thing to behold.

I returned home absolutely smitten with what felt like a new engine. Sure, the bike still needs a hundred little things before I’ll be fully happy with it. But for then, I was content. Now for my next little job. It was time to put the battery and motor oil back into The Mrs’ CM400 so we could go for a ride together. No problem.