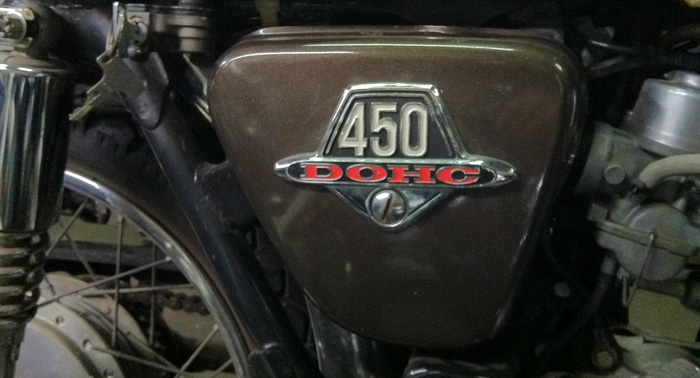 These things are supposed to be simple. An otherwise mechanically sound motorcycle is supposed to run beautifully so long as it’s properly lubricated, correctly timed and has nice clean carbs. This was the wrench philosophy I’d been learning with my mechanic mentor, Jeff, since January. I’ve watched bike after bike come back to life at BlueCat Motors with judicious use of carb cleaner, fresh rubber bits and the replacement of the odd wear-out part. So when I set my eyes upon a neglected 1974 Honda CB450 DOHC, I thought it’d be a relatively easy road to riding bliss. Turns out, this was just the beginning of a long and arduous journey.

Well, that’s not entirely true. I soon thought it’d be an easy road. The machine tricked me, you see. I started out thinking I was in for it, but the bike lulled me into a false sense of confidence about its engine health. I went along willingly though. I fooled myself into thinking that this was going to be easy. What followed was weeks of necessary mechanical humbling, followed by a generous act of good faith. As I write this, the story isn’t over. I’m looking back on the beginning and middle of this story, not entirely sure how it’s going to end. Truth be told, I’ve been more than a little bit discouraged at the difficulty, but I’m also heartened by an act of friendship this little brown bike facilitated.

First, some background. This particular piece of vintage Japanese machinery is a bike that has been in storage at BlueCat Motors for longer than I’ve even been aware of them. Two seasons ago, back when BCM was still renting that deplorably fabulous warehouse space off Vandalia, and long before I got to know the owners, The Mrs and I stopped in to see what old bikes they had for sale. We were each interested in having a small, nondescript bike of our own so that we could wander the state the way our scooters let us wander the Twin Cities. I also had a vague desire toward something in a Cafe Racer flavor, even though at the time I didn’t even really know what that meant. We looked at a handful of machines they had out on the showroom floor, including a cool little Honda twin with a paint job the color of metallic root beer. One of the mechanics came out to talk to us — a quiet guy called Jeff who walked us through the various machines on the floor. Jeff later become co-owner and head of service at BlueCat Motors. Soon after, he became my teacher and fast friend. Back on that late winter day, I asked him about the brown Honda. Jeff looked at it for a moment, sighed, and explained its predicament.

“This is a CB450, but it’s more of a project bike. It doesn’t run and it will need a lot of work before it would. But, it’s priced as a project bike. So that’s something. If you’re willing to do the work, you could possibly save a little money.” he said. Part of my interest in getting into motorcycles was to work on them. I didn’t aspire to be a mechanic at the time, but tinkering was definitely part of the allure. Hearing that this bike needed some mechanical love was actually appealing on a couple of levels. I’d have something to mess with, and I’d be able to conceivably save some money. Plus, it was a gorgeous little machine. So I asked Jeff what the issue was. “Well, what happened is that we had a guy working here as sort of a junior mechanic. He did a rebuild on the motor, but he didn’t route the timing chain correctly. So when he tried to start it, it made all sorts of horrible noises and probably messed up the top end. So chances are, the engine will need a lot of work before it will run again.” As appealing as the bike was, this sounded like a bit too much mechanical challenge for my first machine. We passed on the brown Honda and it passed from my memory. After some Craigslist hunting, we found the CM400 for The Mrs, and I spent that season listening to the whooping howl of the midwest’s only healthy CB650.

Fast forward to this June. I was starting to feel like a real mechanic. Jeff and I had brought The Mrs’ CM400 back to life after it’d blown a head gasket. I’d learned how to rebuild carburetors. I’d procured my Naked GL, but it still needed a lot of little work and a lot of parts and so wasn’t on the road yet. The Mrs’ CM400 was so brilliant to ride that it inspired me toward something similar. I’d sold my Vespa, and Ryan made me a great deal on that CB450 I’d forgotten about. Basically, with the engine assumed to be garbage, he’d sold me the bike for the value of its custom seat plus a few hundred bucks. A great deal for both parties.

The first order of business was to see just how bad the engine damage was. Since the engine hadn’t actually been run very long with its cam chain misrouted, there was an outside chance it was undamaged. It wasn’t as though the chain had broken at high RPM. It had only been turned over with the starter. So there was hope. I set up a night with Jeff to investigate.

We got the CB450 up on the lift to get started. Most engine work starts with removing the fuel tank. The CB450 is old enough that it still has an external cross-over line that runs under the main backbone of the frame. It lets fuel from one side of the tank cross over to the other side. Otherwise, you’d run out of fuel, but still have gas in the tank. None of that matters though. The real function of the crossover tube is to make the fuel tank a pain in the ass to remove. You’ve got to pinch the line off with a hemostat, pull one end loose, and try to plug the fitting with your finger. As Jeff explained the procedure, he added “Yeah, there’s no good way to do it. You’re going to get gas all over you the first time you do it. Just go with it.” He was right. It was a mess.

With the tank and the side covers off the bike, I pulled the carbs next. Those were due for a rebuild anyway, so it was good to get them off the bike. I then needlessly pulled the ignition units. They weren’t actually in the way. Oh well, I’m in it to learn, right? All of this was really just preamble to make the valve covers accessible.

With twin cams, the CB450 engine has two access panels, one front and one rear. Eight bolts a piece and the cams were exposed. The problem with this particular engine is that when it’d been improperly reassembled some seven years previous, the mile-long cam chain had been run over the center idler gear instead of under it. So not only was the chain tension inadequate, the valve timing would get further and further off with each rotation. Being just a few teeth off can make the valves slam into the top of the pistons. That’s bad.

The story goes that when that ill-fated mechanic tried to start the motor, it made a horrible noise and he stopped immediately. At some later point, the cam chain was correctly re-routed under the idler gear where it belongs, but the actual damage was still unknown. BCM had to actually buy the bike from the customer, where it sat for years before I came along. Opening up the cam covers felt like as much archeology as mechanic work. We weren’t sure what we’d find under there. Rather than just tearing the head off and inspecting everything directly, we opted to double check the cam timing and perform a compression test. There was an outside chance that the engine wasn’t actually damaged beyond the cam chain chewing on non-essential edges of the inside of the head where it didn’t belong.

There’s a mark on each cam and a corresponding reference mark on the engine head. There are then another set of marks on the rotor end of the crankshaft where the charging system is. There’s a point in the engine cycle when these three marks are supposed to line up together. This engine was one tooth off on the exhaust cam. That much we knew, but the question remained, was one tooth enough to slam the exhaust valves into the tops of the CB450’s twin pistons? If the engine had compression, things might be alright. If the compression was low, then chances were there was a bent valve or worse.

Before we could do the compression test though, we’d have to cheat the exhaust cam one tooth on the chain. I left most of this in Jeff’s capable hands. We pulled all four cam ends so that we could wrestle down off the chain and back on again in the right place. I manned a wrench on the rotor, making sure the crankshaft stayed put. It took us about half an hour to finally get the cam back in place and on the right teeth. Another half hour on and we had the cam ends back on and the valve adjusters back in place. These four covers contain oil-fed bushings on which the cam shafts rotate. There aren’t cam bearings, which is surprising to me. These four ears give the CB450’s engine its distinctive shape. With those back in place, it was time for the compression test.

We pulled both spark plugs and Jeff threaded in his compression gauge. Grabbing the shop’s jump box, we basically hot-wired the starter. Jeff hooked the positive cable directly to the starter and grounded the negative clip on one of the exhaust bolts. The engine chugged laboriously, huffing and puffing out of the open cylinder opposite. Compression in that first cylinder was good, though I don’t recall the exact number. We were both pleasantly surprised. I had a glimmer of hope that this engine might be alright after all. I thought I might actually be riding this motorcycle sooner rather than later. At the same time, I was even a little bit disappointed. I was looking forward to rebuilding the top end of the engine — replacing pistons, changing and reseating valves. I’d take a healthy engine though. That meant less fixing and more riding. The gauge swapped sides. The second cylinder had good compression too. We were in business! 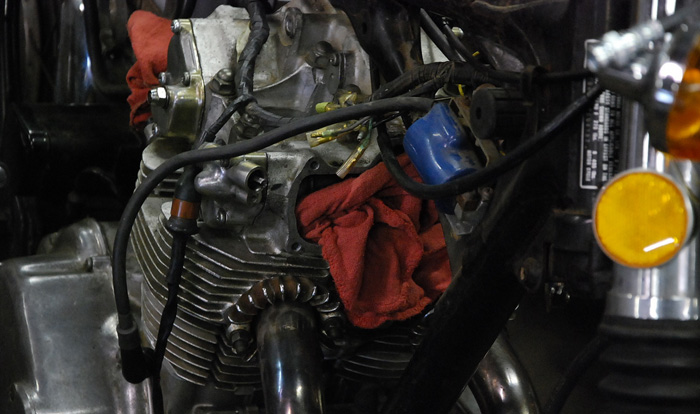 It was getting late, so we boxed up all the loose parts and I stuffed red shop rags into all the open engine ports. Tools went back in their box. I left BCM feeling hopeful. This wasn’t going to be as bad as I thought it’d be. What’s more, I was sure I’d have my city bike much sooner than I expected.