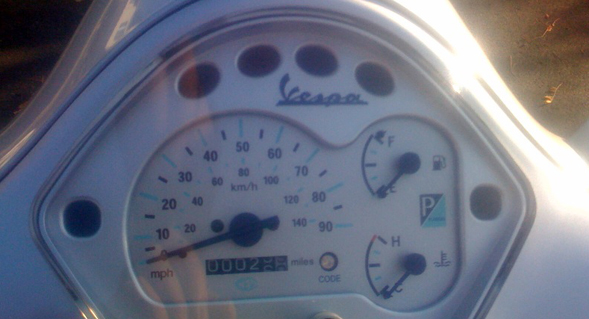 4/7/2009 — Today’s ride began with a revelation. This whole season I’ve been fussing with a starting issue. My theory was that there weren’t enough cranking amps to properly engage the starter solenoid — so upon hitting the starter button, the starter motor would just spin freely and not engage the flywheel. Since my battery was properly tended all winter, that left the turn indicator buzzer I’d added in the off season. So as an experiment, I disconnected the buzzer fuse to see if the bike would start more readily the next ride. Sure enough, it cranked right up.

So the obvious solution would be to install a switch in-line with the fuse. That meant a trip to Radio Shack. On the way, I visited the showroom at Simply Sportbikes, and dropped off some insurance paperwork.

High points
Riding around on a gorgeous day, seeing the look on the salesman’s face when I told him my Vespa would do 70 mph, and finally getting what I would consider “good” at soldering. It’s also nice to be able to switch off the buzzer without interrupting the indicators – it gets old quick at a slow-changing traffic light.

Low points
I confused the turn lanes in the shopping center parking lot for Radio Shack and nearly got myself run over. Completely my fault and I’m fortunate not to have been plowed by a pickup truck. At the end of my ride, I was finally fed up with the low height of my windshield and the deafening noise it makes in my helmet, so I removed it. Need to go taller or just forget about it.