Let me begin by saying that I’m fine. The only reason I got an MRI was to rule out things my doctor was already pretty sure I didn’t have. My results came back completely clear. Aside from endlessly saying “It’s not a tumor” that part of the story is actually really boring. What I wanted to capture was the experience of actually having the MRI itself. Flatly, it sucked. The 140 character version is thus: 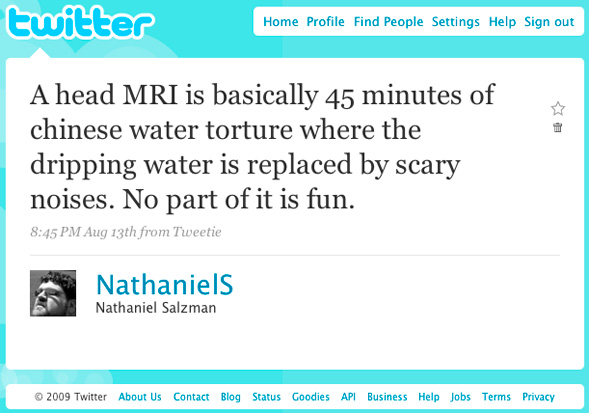 When I arrived at the imaging center, I was actually pretty excited to get to see the insides of my head in ridiculous detail. I asked a bunch of questions, made jokes with the nurses, and swapped stories of the day with The Mrs. I didn’t think it was going to be a big deal. As much as I was geeking out on the fact that A) the magnet is always on, and B) it’s cooled by liquid helium — it was all fun and games until the actual scanning began. On TV, an MRI takes only a couple minutes and is administered by Remy Hadley. My MRI took about 45 minutes and was given by a middle-aged guy whose name I never caught.

For a head scan, they lay you down on a narrow little sled stretcher. They stick a little hair cap on your head and give you a pair of air-powered headphones that let you sort of listen to satellite radio while they reorient your electrons. Once you’ve got your ears on, they place a half dome cage over your face. That’s right, a cage! They don’t just lay it there, they lock it in place! As he clicked the retaining clips I thought to myself that it’s a good thing I wear a full-face motorcycle helmet on nearly a daily basis, otherwise this cramped arrangement would be pretty unsettling. The head cage really wasn’t too bad. My earliest discomfort was that there are no arm rests. I have a pretty wide frame and basically both shoulders were hanging off the narrow sled, leaving my arms dangling. Once they slid me inside I could rest my arms on the inner wall of the round scanning chamber, which helped a lot. Up to this point, the whole thing was actually very sci fi — like I was about to travel through time or space. I figured that it really couldn’t be that bad. I’d have to lay there, and it’d get boring, and not being able to move would get uncomfortable, but that would be it. No problem. I’m zen.

You cannot, under any circumstances, or for any reason, move your head. You can’t move your head at all. That may not seem like a big deal, but trust me, it is. More on that in a moment. Not sure when they were going to start the actual scanning part, I positioned my head in what seemed like a stable position. The ceiling of the scanning chamber was about six inches from the tip of my nose. The single, light blue stripe made it really tough to judge just how far into this tube they’d actually slid me. The doctor is able to talk to you through your headphones, or at least that’s the idea. Mine were not too impressive. I could hear the tech, but only just over the chirping and hum of the MRI machine.

They told me to hold still and that this first scan would be for about two minutes. The sound is hard to describe. It’s loud. Not quite jet engine loud, but definitely city bus loud. It’s part giant copy machine, part tornado siren, part Stanley Kubrick. It was deeply unsettling. The noise, coupled with the close quarters, coupled further with even just my mild head restraint was very damaging to my calm. It isn’t exactly scary — it’s better described as really, really stressful. I had thirty minutes to go, then they were going to pull me half way out and inject me with contrast fluid. Five minutes in I was just trying to focus on taking deep breaths and trying to slow my racing heartbeat. I closed my eyes and could swear that I could feel the scan re-orienting my electrons. It felt a little bit like I was floating in a slowly rocking tub of water. Ten minutes in I started to really regret my head position. My chin was too low. It was actually a little bit difficult to breath in that position and took some focus to keep from feeling like my throat was closing up. I was stuck with it though, if I moved my head we’d have to start over. It didn’t really get easier. Twenty minutes in and I was in my cave, with my power animal. “Slide.”

Thirty minutes finally passed. It seemed to go on forever, and yet no time at all. I wasn’t done, but at least now I got a bit of a break. Unfortunately, it was 10 minutes spent hanging half out of the machine, and then getting stuck in the arms with what felt like railroad spikes. I still couldn’t move my head, as the next round of scans needed to line up as much as possible with the previous. The doctor and his nurse hunted unsuccessfully for veins in the crotch of my elbow. On their second attempt, they thought they had the vein and tried to inject the contrast fluid. It felt like icy sulfuric acid. It’s not supposed to hurt. They’d missed the vein and now it felt like I had a wasp superglued ass-first to my arm.

“Is there still a needle in there?” I asked, my head and face still immobile inside the MRI machine.

“No, that’s the contrast fluid. We missed the vein. Sorry about that.” Stuff your sorry in a sack, mister.

They had to call an actual phlebotomist to set the needle. That meant about a ten minute wait. My arms were hanging off the sled again, which when coupled with my immobile head produced unique sensations of discomfort in my neck and back. I asked the doctor for some support and the best we could do was to actually put me back into the machine were I could rest my arms. I had a new problem though. The weight of my head had been sitting on the same spot for about 45 minutes now. It was uncomfortable at first, but now it was getting downright painful. I knew I couldn’t move, so I resorted to just lifting the weight of my head for a second to relieve the pressure. That helped, but I knew that I was going to have to do that little maneuver between scans once we got going again. Where the frak is that lab guy? He finally arrived, and was quickly my personal hero of the day. I didn’t feel a thing.

As I lay there, completely vulnerable to whatever these people wanted to inject me with, the amount of trust I was giving to these strangers weighed very heavily on my mind. I was there willingly. I knew what they were doing. They were talking to me throughout and keeping me posted on what was going on. I couldn’t help but think of people around the world at places like Gitmo — people being physically and mentally tormented by their captors. People held against their will, both guilty and innocent who are strapped down to platforms not too dissimilar to this one and nearly drowned, or injected with God knows what. I felt the pain in what I later found to be a golf ball sized knot in my left arm from the botched contrast fluid injection. I thought about all the people around the world who get the shit kicked out of them every day because they’re the wrong religion, or from the wrong country, or because they were planning to blow something up. As I experienced the mild inhumanity of medicine, I felt a profound empathy for people who have actually been tortured, deservedly so or not. I really wouldn’t wish that on my worst enemy.

With what I could only imagine as bright green glow stick fluid now coursing its way through my veins, they reinserted me into torpedo tube 101. I’d grown more accustomed to the sounds and even the physical restraint. Now it was the discomfort of not moving for almost an hour that was making me want to tear that machine apart from the inside. I was starting to get pretty achy up and down my back, but the focal point of it was the back of my head. It felt like the back of my head was resting on a roofing nail. Between scan blasts I did my best to lift and take pressure off that spot without moving my head. It helped a lot, but those last 15 minutes were still very long and uncomfortable.

When it was finally over, the doctor’s voice came on my ear phones like an airline captain telling me we were about to land. I really only had one thought. Must. Move. Head. I lifted my skull off the plastic of the sled, rotated it slightly, and set it back down on fresh scalp. Relief. The doctor undid the retaining clips on my cranial iron maiden and I was finally free to sit up. My mind wanted me to bolt upright, grab the nearest scalpel and escape my captors biting and scratching as I went. My body, however, wanted me to roll off the side of the sled into a hot tub. I sat up slowly, achy and a little bit dizzy, just thankful that my amazing wife was waiting for me around the next corner. For the record, she was my power animal.

The last piece of mind game in having your head examined is that they give you a CD of your scans. That way you can take them home, look at them, marvel at the wonders of creation, then Google “brain tumor” and feed your inner hypochondriac. I wouldn’t get results for a few days. Thankfully they came back completely clean, so in the end, my torture was definitely worth it.

Looking back, I certainly hope this is my last MRI. It really did deeply effect me. In the grand scheme of things though, this was only really uncomfortable. I can’t imagine the complete mind fuck it must be to get tortured for real. I am now more convinced than ever that those who would advocate torture, even of our enemies, are wholly ignorant of what that truly does to people. Or worse, they do know and advocate it anyway. Of course we have to detain dangerous people. Military personnel often have to use deadly force. But how we treat people, even dangerous people, when they are defenseless, is the truest measure of our national and personal character. Get involved.