Last Monday night The Mrs and I got to see Jonathan Coulton plus Paul and Storm live at the fabulous Guthrie Theater in Minneapolis. Amidst a fantastically nerdy group of Coulton devotees, I just don’t think it would be possible to have a better venue to hear Coulton plus Paul and Storm. The people-watching was great, and were there a computer in need of tech support, it’d be in good hands. The stage was on loan from some currently running production there at The Guthrie, but made the perfect backdrop for a geeky show like this one, especially for songs like Creepy Doll. We had terrific seats and it was easy to see that the whole crowd was just as excited as we were.

Paul and Storm opened in fine fashion and more than warmed up the crowd. Previous to the concert, I knew who Paul and Storm were, but I wasn’t nearly as familiar with their music as I am with Coulton’s. I’ve heard a few hilarious episodes of their podcast, and seen a few very funny YouTube videos, but their music was a very pleasant surprise. You couldn’t get more antithetically “rock star” than Paul and Storm, but their stage presence, exuberance, and nerdy humor form a truly charming musical mix . In short, they’re fantastic. Any song duo with a gregorian chant song called Nun Fight simply can’t be passed over as your run-of-the-mill comedy singers.

The most memorable moment of Paul and Storm’s opening for me was during the audience participation portion of their last song, The Captain’s Wife’s Lament. When performing this song live, Paul and Storm rely on the crowd to be their merry band of pirates. Our job is to “ARRR!” at appropriate times and in appropriate ways (here’s a great example). During their obligatory set of pirate “ARRR!” puns, Storm asked:

“On what station would you find Garrison Keiler?”

After just half a beat, we all answered “NP-ARRR!”

Storm paused for a second, trying to think of additional local tie-in. “And what is his favorite character?”

A very pregnant pause hung over the crowd as we all searched for the joke. With most of the “ARRR!” puns up ’till then, there was this great sort of collective consciousness where we would all arrive at the answer together. I was stumped about it too, until it struck me. Figuring that the rest of the crowd had come to the same realization I had, I shouted out in full voice, “Guy Noi-ARR!”

It was great. I’ve never been a particularly shy person, and all the theatre I did in college cured me of what little shyness I may have had. No sooner did the answer leave my mouth did Paul and Storm both swung instantly in my direction. “Who was that? Bring up the house lights!” The lights came up and there I was. “Come on up!” said Storm. “Give him some of that candy!” chimed in Paul. It was hilarious. The crowd cheered, and I got a Chunky. Fun stuff. 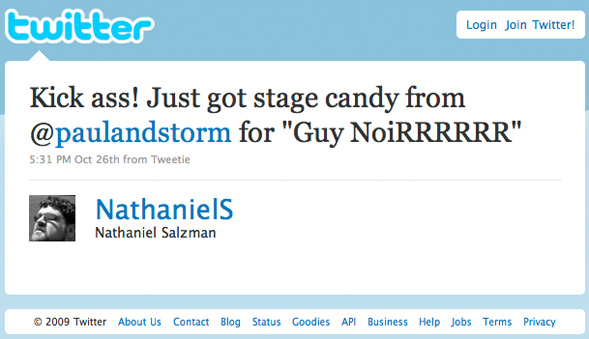 After a brief intermission, it was time for Jonathan Coulton. I expected him to utilize Paul and Storm for most of his show, so I was surprised to see him come out all by himself — just him and his guitar. He got right to it though, tearing up the stage with his song stylings. Paul and Storm did eventually appear to back him up for several songs. I was glad they did. Coulton is great on his own, but it’s really with the fullness of Paul and Storm’s harmony and energy that his music really comes alive. He also seemed to really relax and ease into his set with P&S’s help. They have a great, symbiotic relationship going on from what I can tell. The lesser known duo get to be the ramora fish to Coulton’s shark of fame — tagging along with him on tour and building their own fan base out of his — and his music is made all the better with their participation and all the more fun with their opening for Coulton. We the crowd adored all three of them. There were gifts of hand-knit giant squid and even the illusive half-pony-half-monkey-monster. Jonathan was pleased.

JoCo performed the usuals. Future Soon, Mandlebrot Set, Skullcrusher Mountain, Still Alive, RE: Your Brains and other staples. He also performed some songs that were very new to me and even pulled out some Thing a Week classics like Dance, Soterios Johnson, Dance. It was a full set, but the show was over far too soon for me. I was definitely sad to see them give their final bows after I Feel Fantastic. As we left, we picked up a sheet of his hilarious, cake-scented stickers. Fully nerded out, we made our way to the train and headed home. Next time JoCo and P&S are in town, I’m buying tickets early!

If you’re not familiar with their music, I can’t recommend it enough. Check out Jonathan Coulton + Paul and Storm.