This “rebuilding year” has involved four machines so far. My wife’s motorcycle got sorted out right at the end of winter and has been running great ever since. Meanwhile, I went from having both a running motorcycle and a running Vespa of my own, to three old motorcycles, none of which were road worthy. Trying to make these bikes reliable, rideable and enviable is the crux of The Wrench Log. 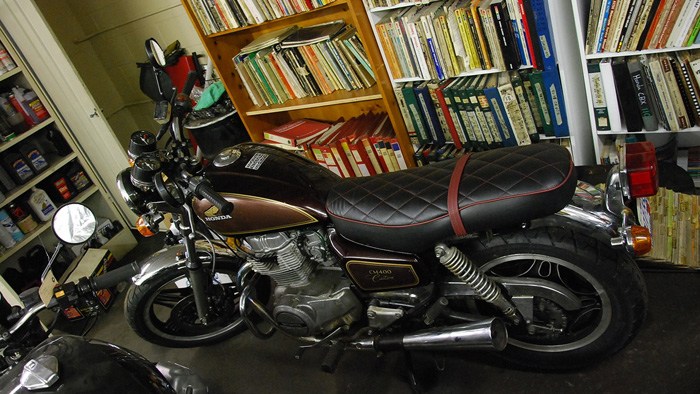 This all started with the bike above, my wife’s ’81 Honda CM400c. It was the first bike that my wrench sensei Jeff and I fixed together down at BlueCat Motors. It was my first time having the head and cylinders off a motor, which I considered a significant milestone. A few days later, I learned how to properly rebuild the CM’s constant velocity carburetors. That motorcycle has set the standard for reliability since then — a standard I’ve been having real trouble living up to with the rest of my fleet. After that late winter’s worth of successful wrenching, riding my wife’s CM400c for the first time inspired me on the spot to sell my 2008 Vespa GT — what had been my city ride standard for nearly three years. I wanted a mid-size vintage Honda to run around town on. When the Vespa sold, I procured a gorgeous 1973 Honda CB450 that’d been languishing down at BCM since 2004. It had a one-of-a-kind custom seat, 2-into-1 racing pipes and an unknown amount of internal engine damage. The CB450’s DOHC powerplant is essentially an over-the-counter version of Honda’s racing engines of the time. It makes the CB450 a deceptively fast machine for its size — a bike that can punch well above its weight. It’s a motorcycle full of potential, none of which I’ve yet realized. 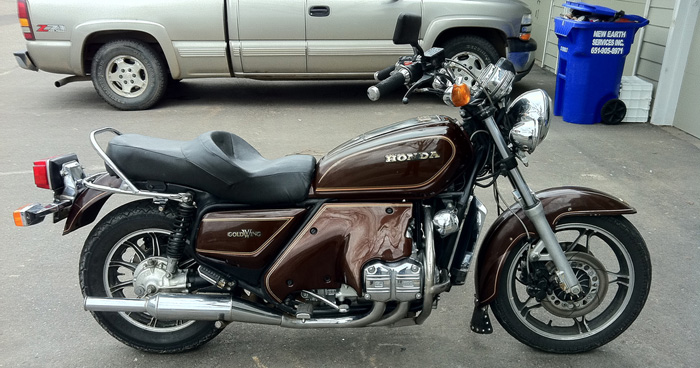 I’m a big guy. I’m tall. I’ve got a big build. I’m right at the service weight on some midsize and smaller bikes. So when I discovered the Naked Goldwing, (or Naked GL as I usually call it) I saw an opportunity to finally have a bike that I really fit on. Beyond that, the GL is a machine of unequalled touring capability. That would make a GL a bike I could ride to the west coast as easily as I could ride it to west St. Paul. The naked GL is also a really unique machine that, with a bit of customization, can be something really special. All that technical capability comes at a price though. While not an expensive motorcycle to buy, the GL1100 is an incredibly complex machine to work on. This bike is an opportunity. I bought it from a buddy of mine who’d had it for fifteen years, but hadn’t ridden it for more than three. It will need standard resurrection work, like a carb rebuild, a new battery, brake work and perhaps a new pair of tires. The question then becomes what next? I could just ride it. I could sell it for a small, quick profit once it’s running. Or, I could use this machine to kick-start my aspirations toward building custom motorcycles. Right now, that’s the plan. I’m thinking something like this: