April 8, 2011 — I started riding two-wheeled vehicles in late 2007. Looking back on my perception of riding, of bikes in general, and of motorcycles in particular, I simply can’t believe where I’ve come to. When I bought that 1979 Vespa P200E, a large part of its appeal was precisely that it wasn’t a motorcycle. The last thing I could possibly imagine myself riding was a big, heavy motorcycle. Which is why I still can’t really believe that I just bought an ’83 Honda GL1100. That’s right. I bought a Goldwing.

Now this comes as no surprise to regular readers, as I’ve been yacking about a naked GL since February. This particular bike has been in the works for about a month. While I had another bike lined up, I switched gears when this ’83 GL Standard showed up for sale on Craigslist. Spec for spec, this bike was nearly equal to the bike I passed on. Both are 1983 models. Both have just under 50k miles. Both have upgrades to the suspension and both lack all the touring nonsense that I don’t care about and hate the look of. What made me abandon my $100 deposit on that bike in Illinois was two very unique pieces of plastic: this GL’s art deco engine covers. There was a price advantage as well, but parts of that wash out with the lack of rear luggage and the decent amount of work this GL will need before I’ll fully trust it. 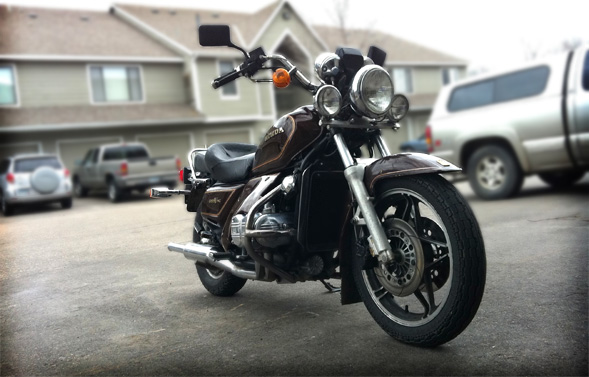 There are a lot of things this bike is going to require to be fully road worthy, and honestly, I don’t even know the full extent of the bike’s needs yet. Next week Jeff and I will go over it top-to-bottom and get a full picture of what needs fixing and what needs upgrading. Whatever the bike needs, I know I’m in for it. These GLs are not simple machines. The engine with its shaft drive — the very things that makes this motorcycle so brilliant — makes it complicated to work on. Four cylinders in boxed pairs are fed by four carburetors through a four post archway of an intake header. A pair of chrome pipes trail behind, giving the GL a very satisfying rumble. Where most motorcycle fours are a rather mechanical-looking row of fins and bolts, the GL mill is almost architectural. The cylinder pairs hang below the frame like the trusses of some dieselpunk lift bridge out of a graphic novel. Industrial design aesthetics aside, this gives the GL a very low center of gravity and that’s central to the best part of the GL: how it rides. 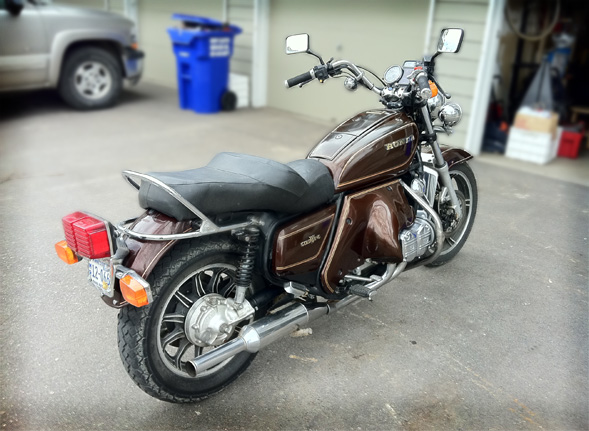 I lined myself up to buy a naked GL without having ever ridden one. I did a lot of reading, and a lot of asking around. The fully-dressed GL Interstate and Aspencade models are very well spoken of as powerful, “surprisingly agile” and reliable well over 150,000 miles. But truth be told, I had no idea what to expect and I was a bit nervous when the seller delivered my new ’83 GL Standard on Thursday night. Before we signed all the paperwork, I took the GL out for a quick test ride. Dropping into 1st gear, I gave the throttle a gentle twist. My CB650 would rev easily, but was absolutely dead in the low revs. That above anything else is why I sold it. I originally wanted a twin like my wife’s bike, but here I was on another four cylinder bike. The GL’s engine indeed revs effortlessly and smoothly, yet it’s actually got torque like a steam locomotive from very low in the revs. The 640 lbs of GL tear away from a stop with no drama and seemingly no effort. The clutch is very forgiving, even as badly out of adjustment as this clutch seems to be.

Going forward is only part of the equation though. How hard would it be to keep such a hefty bike upright navigating the parking lot? A piece of cake, actually. The GL is so solid, so stable and so planted that even at very slow speeds, the bike is completely manageable and doesn’t feel heavy at all. With some practice, I think I might be able to win a slow race no problem. With slow speeds very, very promising, what would happen when I really opened the taps? Tilting out onto the main road, I screwed on the throttle. The GL rocketed forward like the space shuttle off the launching pad — powerfully, smoothly and without drama. The tall gears of the ’83 meant that 3rd gear had me at nearly 60 mph in three halves of an instant. It’s fast. Properly fast. Faster than a 640 lb motorcycle has any business being. The shaft drive also meant the GL was smooth like a jet-engine powered sewing machine.

My test ride was brief, because it didn’t take me long to figure out I’d made a very, very good decision in buying this GL. I gave the bike a quick weave in my lane and had to stuff my jaw back into my helmet. I expected the GL to handle like an over-filled shopping cart with a bad wheel. Not at all! It’s precise. It’s responsive. It’s downright nimble. You can tuck it deep into a corner and it’ll track like it’s on steel roller coaster rails. Fantastic. The brakes are pretty great too, even though they’re linked and far more fussy than they ought to be. That’s easily sorted out though. In under a mile I was sold. Money changed hands, papers got signed, and I was then the proud owner of a rocket powered super sled.

I spent about half the next day getting to know the bike before I dropped it off at Bluecat Motors for inspection. At every turn and every straight, the GL is very impressive. It’s a big bike that doesn’t feel like a big bike. It feels, actually, a bit like all the best things about a motorcycle, and all the best aspects of a car. Not too surprising, given it’s got all but a car engine in it for power. I’m smitten. It’ll be a lot of work simply correcting the bike back to baseline (removing the harley headlights/blinkers, swapping out for the correct front wheel, and more), but it’s going to be worth it. I see some epic journeys ahead on this bike, and I know I’m going to enjoy the ride.