I’m going to buy a Triumph, dammit. When I attended the Triumph demo event a few weeks ago, I got to ride three brilliant Triumph motorcycles back to back. I was impressed with each of the bikes I rode, but I was impressed with Triumph as a manufacturer even more. When I can afford to, I want to own something from their stable. The tricky part is deciding which bike to have. Each of the three bikes I rode that day were brilliant, but in different ways. In this post, I’m going to focus on the Thruxton, Triumph’s cafe racer version of the Bonneville. It was the first bike I rode, and the one I was most interested in when I heard about the event. I opted to ride the Thruxton first because it’s the closest to what I’m used to riding and it’s also the least powerful. I figured that the 889cc parallel twin of the Thruxton would be easily manageable. Additionally, I was reassured by what a Triumph sales guy had told me back when I first demo rode the Bonneville.

You can’t really over-ride it. It doesn’t have more power than the suspension can handle, so it’s pretty easy to stay out of trouble.

My Thruxton was in a line of about a dozen Triumphs. After our safety briefing, we all made our way out to our respective machines. It took a second to locate the ignition key located off the left side of the headlight. My demo Thruxton was fitted with an aftermarket exhaust, so when I started the bike I was very surprised to hear such an aggressive “BRAP! BRAP” when I twisted the throttle. At idle it was nice and quiet, but its raspy roar instantly got everybody’s undivided attention with a couple twists of the throttle.

There’s a time machine quality to the Thruxton. It’s so a bike of the past, yet so undeniably modern. It looks and feels so classic, yet it was tight and precise in a way only a modern engineered machine can be — even this tired demo model. Most notable is a surprising lack of plastic on the Thruxton. The only plastic I noticed on the whole bike was the gauge cups and the hand controls. But even these pieces were very sturdy, heavy and of high quality. It’s obvious at every level that this is a well thought out machine that’s been expertly manufactured.

Our demo route was a 14 mile ride on 55 mph country roads. On all three of my demos, I don’t think we saw more than half a dozen cars. We left the dealership in a line of about ten demo bikes with three escort riders. The Thruxton and I were last in the line of demo bikes. Rolling slowly on the throttle and gently releasing the clutch, the Thruxton pushed forward easily. The more twins I ride, the more I want one. The low-end torque of those double jugs made starting from a stop an effortless enterprise for this moto newbie. It’s very stable at parking lot speeds. I thought the rear controls might be a little tricky to get in and out of, but they were no problem at all. The shifter was crisp and notchy, and the brakes felt well balanced front to rear. The reason the foot controls are on rear sets is due to its dropped handlebars, but both were easy to reach and didn’t cramp my legs. Though not as aggressive as clip-ons or even clubman bars, the Thruxton’s low bars are still low enough to put a lot of pressure on my hands. Even with the highway wind in my chest, my hands were pretty uncomfortable almost immediately and stayed that way for most of the ride.

As we pulled out onto the main road of our route, I opened up the Thruxton’s throttle for real for the first time. The torquey nature of the 900 twin came growling to life instantly and smoothly. Gearing up into 5th, I kept looking for gears. It just didn’t seem right to be doing about 70 mph and still have so much power left. The growl of that aftermarket exhaust was made entirely of grin. Seated comfortably on the Thruxton’s solo seat, the bike propelled me forward eagerly. I expected more vibration from the engine, but this parallel twin is very well balanced and the Thruxton didn’t buzz my hands or feet. The bike was surprisingly powerful for no more of a motorcycle than it seems to be, but just as advertised it’s perfectly matched to its suspension. The engine has a terrific, distinctive character that’s unlike anything I’ve ever ridden. It’s raspy and torquey, yet still very eager to rev for a twin. 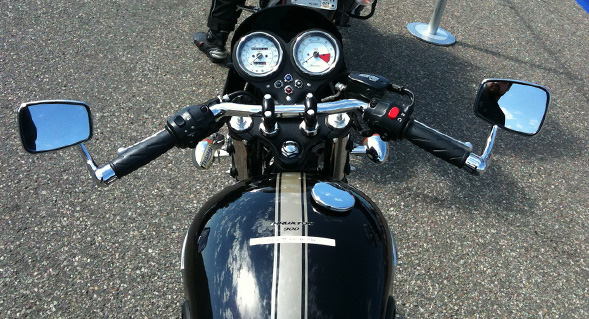 For such a stylized motorcycle, the Thruxton was surprisingly comfortable. That’s especially surprising because I’m a big guy. At 6′ 3″ most motorcycles feel pretty cramped. The Thruxton was especially comfortable in the seat, which is surprising given that it’s pretty firm. I want that seat for my Honda. The rear sets didn’t cramp my legs and I never felt like I had to reach for the shifter or search for the rear brake. My only discomfort was in the palms of my hands. The forward, cafe racer handlebar position meant a lot of weight on my hands. I didn’t have any numbness or outright pain, but the pressure was uncomfortable after only a few minutes and I couldn’t imagine spending all day on it. Perhaps it’s something you get used to. Too bad, as the rest of the bike was such a blast to ride. Beyond their position, the hand controls are comfortable, easy to use, and very high quality. They didn’t feel like parts bin controls that you’d find on a lot of bikes these days.

Tucking the Thruxton into the sweeping turns of these southern Minnesota back roads, it felt a lot like my CB650 — stable, planted, undramatic, precise, but without feeling clinical or boring. The front end felt solid and appropriately heavy. I had to manhandle the thing just a little bit into and out of the corners, but I liked it that way. It seemed appropriate for this kind of old school bike. The suspension soaked up the bumps without feeling stiff or mushy. Where it differs from my regular ride most is in the engine character.

At the end of the line of bikes, I was able to fall behind a bit and race back up to the group. This was entirely too much fun! All the Triumphs I rode that day had two big things in common. The first was their brakes. The Thruxton stopped powerfully, with quick, responsive brakes just like I like them. The power between front and back was balanced very nicely and there was no drama, even under harder braking. The second thing all these Triumphs had in common was how they almost don’t need transmissions. The Thruxton was so torquey, it didn’t seem to care at all what gear it was in. I swear, you could probably start it going in 4th from a dead stop no problem. At higher speeds, there’s no need to downshift for passing. Just screw it on, and listen to the thing growl while you’re shot out of a cannon. That experience started with the Thruxton and just got more intense with the more powerful bikes I rode later.

Here’s the thing though. If I bought a Thruxton, it wouldn’t be for the performance. Even though it’s more fun than should be legal in most states. The Thruxton is about history, about heritage, and about that cafe racer tradition that’s all too foreign to our shores. It’s so modern, yet still so classic and undeniably british. At this, it’s real purpose, is where the Thruxton really shines. It’s got all the shiny bits available for the Bonneville, including the 3D chrome tank emblems, chrome bar-end mirrors, rear-set controls, chrome wire wheels and a solo seat — completing the cafe racer look. The quest for authenticity doesn’t stop there though. The Thruxton’s engine doesn’t look like a 21st century powerplant, but tucked inside those carburetor bodies is a fully electronic fuel injection system. So what you get is a fully modern bike with authentic classic design. How great is that? 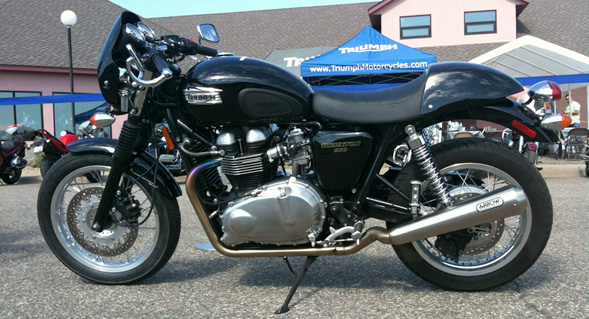 The twenty minutes I got to spend aboard the Triumph Thruxton were far too few. I have no criticisms save the handlebars, but that’s not really even the Thruxton’s fault. Almost any motorcycle is going to need adjustments before it will fit you correctly, especially if you’re a taller rider like I am. For most, I imagine it’s perfectly comfortable. I misspoke earlier when I said that all the Triumphs I rode that day had two things in common. It was actually three things. After riding each, I didn’t want to give it back. This was especially true of the Thruxton. My mind isn’t made up yet that this is the Triumph for me, but the Thruxton can be summed up in one word: charming.