I’ve wanted to ride a Triumph Tiger for about three years now. The dealer closest to me never had a demo available for the Tiger. But what’s more, as a novice two-wheel rider at the time, the 1050cc triple of the Triumph Tiger scared the hell out of me. I had these fearful visions that I’d screw the throttle on too hard and end up with 502 lbs of english motorcycle laying on my chest. Fast forward to July and I’m ready for anything and itching to ride the Tiger.

The kind folks at Triumph said that we could each ride two bikes of our choice that day. I wanted to ride everything. No really. I would have stayed all day and ridden everything twice if they’d let me. Having to choose just two, I opted for the Thruxton and the Tiger. These two bikes represent the two ends of the riding spectrum for which I’d want to own a brand new Triumph motorcycle. On the one hand, the Thruxton is classic riding incarnate. It’s the perfect knock-around bike for short little overnight trips or just cruising around town to bike events. The Tiger, on the other hand, is bred for hard core road touring. It’s the kind of bike you hop on and ride coast to coast. For me specifically, the Tiger is high on my list because it’s such a tall bike. Most motorcycles don’t fit me particularly well, but the Tiger feels like it was made for me. The seat height is higher than most bikes, the foot controls are right where they should be. I can close my eyes, put out my hands, and they fall right onto the handlebars. The bike is just fundamentally comfortable for someone my height and that is rare. 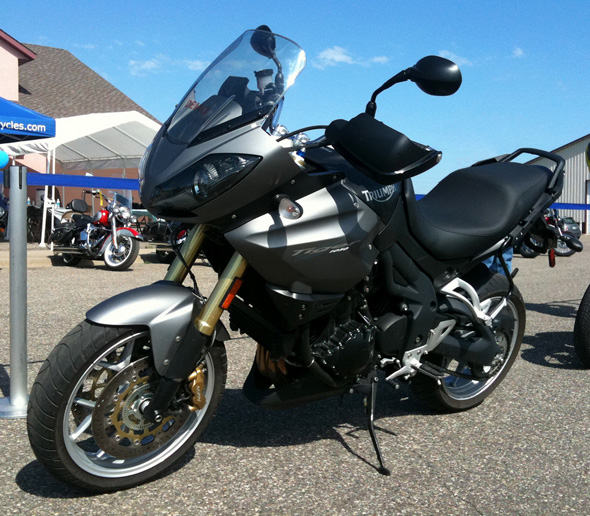 Triumph only had the one Tiger available for demo that day, so when I returned from my Thruxton ride I had an hour wait before the Tiger was available again. After repeating the safety briefing, I approached my steed with a certain amount of reverence. Here it was, the bike I’d been wanting to ride for so long. The trade off for the comfort of the Tiger’s seat position is that it’s a bit tricky to get on and off of. It’s not quite as bad as trying to mount a BMW GS1200 Adventure, but it’s close. Tall as I am, I can’t really throw a leg over like a horse. I had to do a slow vault over the bike like an olympic hurdle. Once I was seated and settled, I pulled in the clutch and hit the start button. The Tiger popped to life instantly with the kind of windy, raspy engine note you’d expect from any liter-class sports bike. In my opinion, the inline three is the perfect balance between low-end torque and quick revs. Triumph, to my knowledge, is the only major motorcycle manufacturer offering three-cylinder engines in their bikes. The Tiger’s mill is shared with the Sprint ST and the Speed Triple, but tuned specifically for the Tiger’s touring focus.

At 502 lbs, the Tiger isn’t featherweight, and it’s tall to boot, but as I let out the clutch in first gear the bike was very manageable. The height of the Tiger, plus the width of the handlebars, makes it pretty eager to lean. This lightness in the steering didn’t make the bike feel twitchy, but it certainly made low speed maneuvering something that required a lot of my attention. It took me a moment to adjust to its enthusiasm, but for all its eagerness, the Tiger was smooth from two to eighty-two. 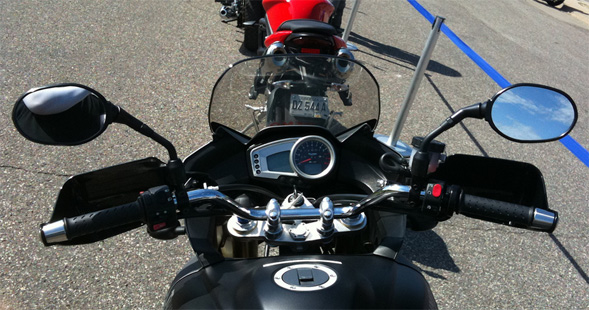 Out on the open road, the Tiger positively glided over the pavement. The tall suspension, with its nearly six inches of travel, soaked up bumps brilliantly — making the roadway feel like it were made of one continuous piece of suspended glass. There was nothing mushy about the ride, though. It didn’t trundle along like an old Buick spending half a mile to stop undulating after every bump. No, this is a very sporting ride. Whoever had tuned this Tiger’s highly adjustable suspension had done it right. There was no front wheel chatter deep in the turns and no unpleasant jolting from too much preload in the rear suspension. The responsiveness of the front end meant that I needed to barely think about what I wanted the bike to do and it was already doing it. I’d ask for more lean, and the bike would eagerly give it to me. The Tiger lived to gallop and loved to be turned in sharply around the bends.

Gallop it did. The power from this 1050cc three-cylinder power plant was positively elemental. The Tiger mill is tuned for torque and power in the low and mid ranges. Screwing on the throttle propelled me forward as though by the breath of the gods themselves. Not snappy and out of control, but with a torquey authority that seemed both bottomless and cooperative. Just like my Thruxton demo, I was riding at the back of the pack. I had entirely too much fun letting them out and reeling them in again. Also like the Thruxton, the Tiger almost doesn’t need gears. Start it in first, skip it to third, then just leave it in sixth. Between the instant torque and the brilliant suspension, 85 mph on the Tiger felt like about 35 mph on any other bike I’ve ever been on.

The first time I came charging up to the back of the pack, I found the Tiger’s most impressive aspect: its brakes. The twin 320 mm front disks were the perfect match to the Tiger’s athletic power plant. The rear disk didn’t have quite as much power as I would prefer, but the fronts more than make up for it. Two fingers of front brake lever were more than enough to all but panic stop. The three brakes in combination could undo all the Tiger’s easy speed without much effort at all. With optional ABS, I can only imagine how quickly this bike would stop if you really got on the right-side controls. Very handy stuff when you’re eating up hundreds of highway miles every day.

I have but one gripe with the Tiger, and it’s the same gripe I have with all of Triumph’s sport bikes. I hate the gauge cluster on these bikes. It’s basically the same unit on each of them and it’s the only thing on any of these machines that feels generic, off-the-shelf, and like an afterthought. The indicator lights are a bit too small, the LCD readout is cluttered, and frankly, I’d just rather have a full set of dials. But beyond that, each of these displays are so alike that none of them seem to really belong to the bike they’re attached to. A small gripe on an otherwise brilliant motorcycle.

The twenty minutes I spent on the Triumph Tiger left me thinking that this bike could not be more perfectly matched to its intended purpose. The fit is perfect. I think I could easily sit in that seat for a month. The suspension is a perfect balance between handling and comfort. The motor makes power like the sun makes heat, and the brakes seem like they ought to be able to move you back in time. What I’ve got to figure out is just what purpose is most important me — the Thruxton’s classic backroad flair, or the Tiger’s long distance prowess? It’s a tough enough equation, but there’s another variable: the Triumph Street Triple R I rode next.