Three years ago, when I first got interested in Triumph motorcycles, the Street Triple had just debuted. This baby brother to Triumph’s iconic Speed Triple seemed brilliant on paper — lightweight, big brakes, naked sport bike simplicity and horsepower to spare. While only a passing curiosity, anytime I’d see one in the wild, they certainly looked like fun. Pushing forward to this July, I’d ridden my allotted two demo bikes, but noticed that on each ride there was almost always a bike or two left behind. They’d not been spoken for. Never being one to worry too much about “rules”, I approached the event director and asked if I could ride one of the unscheduled bikes in the next session. There was a Street Triple R available and I jumped at the chance to ride it.

The STR is a compact little bike. It’s roughly an identical size and weight to my Vespa GT, but with a key distinction. The Street Triple R has about 80 more horsepower than my Vespa GT. Not 80 horsepower, 80 horsepower more. I didn’t figure I’d fit on it well. To my surprise, I just did. The handlebar position, rather than a cafe-style drop bar like you find on most sport bikes, was almost like a dirt bike. This meant a comfortable, upright seating position and very positive leverage over the front end. I had to fidget for a second, but soon found myself well seated and perfectly comfortable. 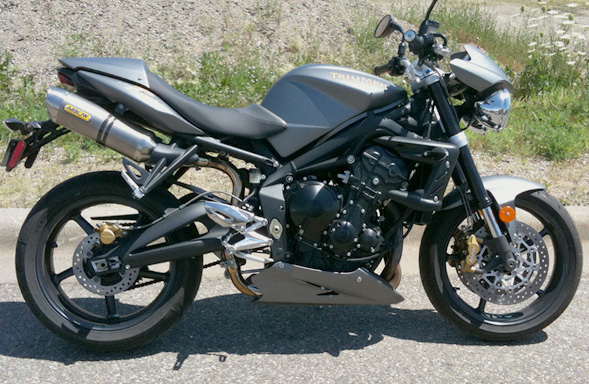 Pulling in the clutch, I engaged the starter. The STR growled to life with a character and deep engine snarl that I hadn’t expected at all. The Tiger sounded very traditionally sport bike — high revving, high pitched, and raspy. The Street Triple R sounded like an old british rally car — all snarl and back burble when I let off the throttle. The twin exhaust cans under the seat popped and growled with fantastic rhythm and character. Once the group was moving, I feathered out the clutch and the STR pulled away without effort. Just like the Tiger, the three-cylinder 675cc mill had instant torque and easy revs. Unlike the Tiger, the Street Triple R could be ridden blindfolded at slow speeds. It felt remarkably light and easy, much like my Vespa GT.

Banking onto the main road, I finally got to open up the throttle. Just like the Tiger the STR is tremendously overpowered, but it’s perfectly cooperative power. I don’t know what the official 0-60 times are for the STR, but it felt like about 4-5 seconds. At no point did it feel like the bike was going to get away from me. It’s a giggle machine, truth be told. Screw on the power, feel the rush, and just try not to laugh. The lightness of the frame, the brilliance of its upgraded suspension plus all that power made for the perfect formula for fun. That’s the beginning and the end of it. The Street Triple R is pure fun on two wheels. The steering feel was heavier than the Tiger, but lighter than the Thruxton — just right!

About two thirds of the way ’round our demo circuit. I took a closer look at the STR’s gauge cluster. It’s basically the same, boring, generic gauge style as the Tiger, and like the Tiger it’s my only criticism of the bike. What I noticed though, is that for all the blistering speed I’d managed to wring out of the Speed Triple R, I’d only been using about a third of the available revs. Peak horsepower on the STR is just shy of 12,000 rpms with redline near 14,000 revs. I never needed to push it past 7-8k before the uncontrollable giggling would set in.

Zipping through the corners was as surreal as screwing on the throttle. The STR was composed, comfortable and above all else, sticky. Between the suspension setup and whatever shoes they’d fitted to this STR, the bike inspired instant confidence. This was a bike with very high limits — limits that the average rider would likely never even get in site of, let alone overreach. It was easy in every way. Easy to maneuver. Easy to go fast. Easy to slow down. Easy to turn in. Easy to accelerate out of the apex. Easy. Easy. Easy. Never boring, but just surprisingly  approachable. This is a bike that I think anybody could ride with confidence and ease. That’s no easy feat, I’d wager.

As with both my previous Triumph demos, the 20 minutes was over far too quickly. I hadn’t really come to this event with this bike in mind, but I was charmed in spite of myself. The Street Triple R doesn’t fit into a particular purpose like the Thruxton or the Tiger do. It wouldn’t be a great bike for touring, at least not for me. It’s not a classic bike style like the Thruxton — as fun to be seen in as to ride. The STR is just for fun. On paper, that seems to disqualify it from my garage. But presented with the three bikes again, just for a ride, I’d probably choose the Street Triple R. Does that make it the bike to buy? What I can’t help but think is that the STR would be brilliant on a day-to-day basis. It’d be a kick of a commute bike, and a great weekend road wondering bike. If there’s only one motorcycle in my stable, would that be enough? I’m not sure.