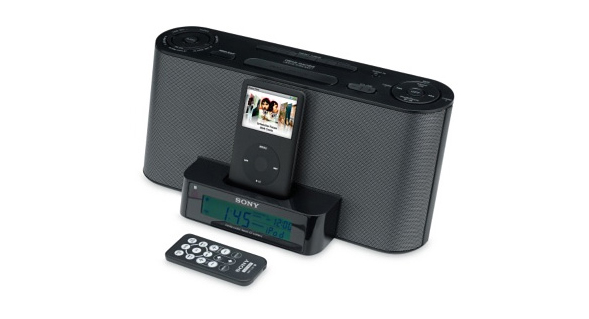 I own an ancient and evil digital clock radio. It has a tape player, an alarm, and at times a radio. The radio hates me. The clock set controls loathe my very existence. This clock and I hate each other with an ancient and reverent passion. It’s done well waking me up for at least a decade, but begrudgingly I’m sure. These days it’s finally outright refused to do is play a radio station with any sort of reliability. What’s more, it mocks me. As I move about the room, the volume and tuning fight with each other — a screaming match of deafening static and distorted NPR. The time has come for a change.

Shopping for a desktop radio these days is somewhat laughable look into three generations of audio technology. They span the spectrum from cassette tape, to CD, to iPod dockable. So being the tech geek that I am, I figured that were I going to shell out for a radio alarm, it ought to be able to talk to my iPod. But then I took that a step further. It really should talk to my iPhone.

iPod speaker docks abound. iPhone docks, not so much. And it isn’t as though you can just plug an iPhone into any old iPod speaker dock. It either doesn’t work at all, insists on “Airplane Mode”, or all you hear is GSM static through the speakers every time the phone reacquires the tower. So you’ve got to go with a dock actually designed to work with the iPhone. There are a few options, some that even include speaker phone capability, but those run in the $200 range. Since what I’m truly looking for is a desk radio first and foremost, spending “two hundo” just isn’t worth it. After searching both the local Apple Store, the interwebs, and finally Best Buy, I nabbed a Sony ICF-C1iP Dock with Clock for iPod or iPhone.

After playing with it for about half an hour at Best Buy, three things really cinched it for me with this dock.

Setup
As I expected, getting set up was pretty much simply getting it out of the box. No big deal. But in plugging it in, I was pleasantly surprised to see that it sets its own time. All you need to do is tell it your GMT+x time zone and it somehow knows exactly what time it is. Score! The infuriating time setting buttons on my old clock radio are a big reason why that thing is going to be ceremonially destroyed.

Functions
The display is clear and easy to understand. I really appreciate its simplicity. The designers didn’t try to get clever, which would be a big temptation in an iPhone peripheral. Clear numbers, intuitive controls, and a handy remote. Not too shabby. You can set two separate alarms, choose iPod, radio, or buzzer as your alarm noise, and even choose a separate volume level for the alarm as you set it. You can’t set an alarm from the remote, but that’s not a huge shortcoming.

I especially appreciate the adjustable back rest on the docking station. By twisting a knob behind the speakers, a back rest pushes in or out to adjust to and support whatever size iPod or iPhone you’ve docked. All the way in, it supports my iPhone in its hard case perfectly. All the way out, it would surely support one of the super thin last generation iPod Nano models. Pretty slick.

Audio Quality
With such small speakers, sound quality is always the big “if” on gadgets like this. As I docked my iPhone for the first time and cued up The White Stripes, the sound was about what I expected. Nice highs, strong mids, and lows simply adorable in their pitiful little attempt at being thumpy. Although initially it seemed a little rough and sloppy in the sound, I switched over to U2 and was relieved that it was just Jack and Meg that sounded scratchy. With a little trial-and-error on the iPod EQ settings, Bono was belting out a Vertigo and the sound filled the room and my entire upstairs very nicely. Though the bass response is not at all thunderous, the sound is full and especially clear. These speakers paired with a small sub would be a great combination.

What really impressed me, however, was the radio. Switching over to NPR, the clarity of the signal and sound was just fantastic. I had to check to box to see if this was actually an HD radio receiver. It sounds that good. Which is perfect, since wake-up radio this was my principle reason for buying the thing. 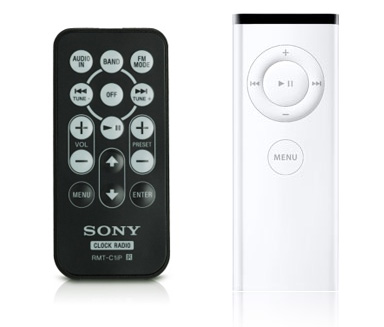 My only gripes
First, the power chord is too short. It’s not quite three feet in length and that means that if you don’t have a power outlet real close, it’s extension chord time. Ick.

Secondly, the Sony remote control for this dock missed out on a real opportunity. Since its iPod/iPhone integration is its key selling point, why not arrange the controls to mirror the controls on an iPod? Granted, there are additional functions to say, the Apple Remote that’s used in Apple’s universal dock, Apple TV, and Apple computers, but why not group the iPod-specific functions in the way people are used to them? It isn’t as though the Sony remote doesn’t work, it’s just disappointing that this remote doesn’t seem designed intentionally for iPod use. It’s probably a shared remote with other Sony products. Not the end of the world, but a real missed opportunity.

This is a great little dock, an even better radio, and a very nice addition to my bedroom. What it lacks in punch, it makes up for in clarity. Speakerphone would be nice, but it’s really just not worth $100 extra.