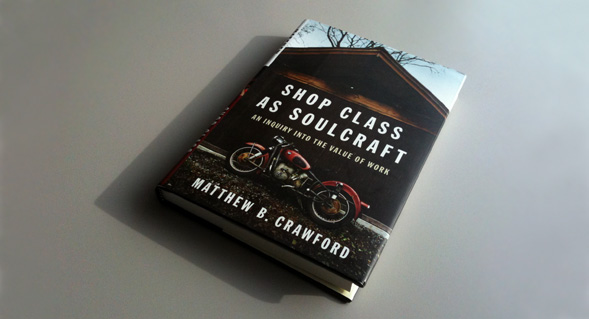 “A lot of people are widely read. Not me. I’m thinly read.” — Eddie Izzard

My wife rolls her eyes at me when I say this, but it’s a perfect description of my reading habits. I love literature, but I have never really been a reader. I love audiobooks and tear through many over the course of the year, but my rate of actual book reading is usually three books or fewer per year. So imagine my surprise when I tore through Shop Class as Soulcraft: An Inquiry Into the Value of Work by Matthew B. Crawford in only three days.

Based on this recommendation on Fast Company’s website, I visited my local, soulless, chain bookstore to preview the book. Since how books are categorized in both libraries and soulless chain bookstores is completely lost on me, I collected a Nook brochure and asked for assistance at the desk. The computer told us Shop Class was located in the Philosophy section. That was a surprise, but having now traversed from cover to cover, it’s a completely appropriate classification. 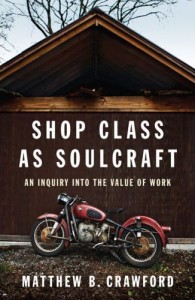 I’m not going to attempt to rewrite Gadi Amit’s Fast Company summary as it pretty much sums up my enthusiasm for this book. In fact, the book goes so deep in so many areas, that any broad summary is going to be grossly insufficient. There’s too much there. Shop Class as Soulcraft is equal parts history lesson, hands-on work ethos, autobiography. deep-reaching philosophy and guidebook for reattaching ourselves to what we do. Crawford explores the deeper knowledge we gain through doing and questions the value we so often put on abstract understanding over practical know-how. Sure, I can understand how an engine works in the abstract, but it isn’t until I’ve held a greasy piston in my hand that I have the kind of useful knowledge only gained by doing.

Amit makes the case that Shop Class should be required reading for anyone pursuing a career in design. I would go further and say that it’s required reading for anyone about to choose any profession — especially one heavy in “knowledge work”. Beyond questioning the established notion that all young whippersnappers should be aspiring to high-paying corporate jobs in knowledge work or as part of the growing “creative class” of designers and design thinkers, this book explores the history of how these aspirations have unfairly degraded rewarding, well-paying trade professions that many people would actually find much more fulfilling. Jobs that are very, very difficult to outsource, he adds. A particularly eye-opening concept is his explanation of compensation. Big salaries are much more sinister when you consider that they’re generally paid only for jobs few people would ever take up out of passion alone. It’s like hazard pay for the soul. Would anyone ever choose to be an investment banker if it didn’t pay very, very well?

What I found most fascinating throughout is Crawford’s exploration of the history of how we used to work, how that changed and its ramifications for everything from what we learn in school to how we work in the professional world. In short, we’ve systematically separated thinking from doing and it’s transformed us into people who know how to use 12 forms of social media at once, but can’t use basic hand tools or even change our own oil. He uses automobile manufacturing as an example. Where it used to take a knowledgeable craftsman to build an automobile by hand (and in so doing he had to understand the entirety of the machine), Henry Ford separated thinking from doing on the assembly line — breaking down the whole sum of the builder’s knowledge into individual, less skilled tasks and transforming the building of a car into a segmented, consistent process. This isn’t evil, and Crawford makes no such inference, but it is the underlying mechanism which run amuck has caused whole skilled trades to go extinct and its conceptual perpetuation into corporate processes and management style for today’s knowledge workers adds insight into how so many people are compelled to work jobs they don’t actually like. They are motivated almost entirely through compensation. According to Crawford, it began in earnest with the craftsmen who built cars before Henry Ford’s assembly line.

Given their likely acquaintence with such a cognitively rich world of work, it is hardly surprising that when Henry Ford introduced the assembly line in 1913, workers simply walked out. One of Ford’s biographers wrote, “So great was labor’s distaste for the new machine system that toward the close of 1913 every time the company wanted to add 100 men to its factory personel, it was necassary to hire 963.”

This would seem to be a crucial moment in the history of political economy. Evidently, the new system provoked natural revulsion. Yet, at some point, workers became habituated to it. How did this happen? One might be tempted to inquire in a typological mode: What sort of men were these first, the 100 out of 963 who stuck it out on the new assembly line? Perhaps it was men who felt less revulsion because they had less pride in their own powers, and were therefore more tractable. Less republican, we might say. But if there was initially such a self-selection process, it quickly gave way to something more systemic.

In a temporary suspension of the Taylorist logic, Ford was forced to double the daily wage of his workers to keep the line staffed. As Braverman writes, this “opened up new possibilities for the intensification of labor within the plants, where workers were now anxious to keep their jobs.” These anxious workers were more productive. Indeed, Ford himself later recognized his wage increase as “one of the finest cost-cutting moves we ever made,” as he was able to double, and then triple, the rate at which cars were assembled by simply speeding up the conveyors. By doing so he destroyed his competitors, and thereby destroyed the possibility of an alternative way of working. (This also removed the wage pressure that comes from the existence of more enjoyable jobs.) In 1900 there were 7,632 wagon and carriage manufacturers in the United States. Adopting Ford’s methods, the industry would soon be reduced to the Big Three. So workers eventually became habituated to the abstraction of the assembly line. Evidently, it inspires revulsion only if one is acquainted with more satisfying modes of work.

Crawford further expands on how the separation of thinking from doing — that is, the bulk of the thinking being done by a select group of upper-level engineers or managers and the bulk of the “doing” undertaken by people with only a basic understanding of their exact task — has crept up from manufacturing into “knowledge work” as well. I won’t attempt to summarize it, but I will say that it’s a fascinating history lesson with a series of keen insights.

As I tore through Shop Class as Soulcraft, I was particularly stirred to recognize that what I do as a designer seems to oscillate back and forth between having many trade-like, fulfilling qualities and sometimes a few of the soul-sucking “knowledge work” pitfalls described in the book. On the positive, the dynamic with my team is very much along the lines of what Crawford describes as a “crew” in reference to tradesmen of various expertise who come together for a common project. I’ve found this to be the case in pretty much every creative team I’ve ever worked on and it’s easily what makes creative collaboration so fulfilling — even if it isn’t always particularly hands-on. Now I can’t help but think of design work as almost one part electrician, one part sculptor. I particularly appreciated Crawford’s explanation of expertise as pattern recognition. Through the ongoing experience of doing the work, we start to pick up on patterns — patterns we then draw on intuitively on a daily basis. For me it lets me see what’s wrong or right with a design in ways that are sometimes difficult to articulate to other people. That is, it’s difficult to explain how I “know” that this doesn’t look right. Their eyes aren’t used to looking for what I see. For example, I was showing Photoshop Disasters to a colleague this morning and on most of the images, she couldn’t see many of the errors unless I pointed them out. How come they’re invisible to her and painfully obvious to me? Experience. More specifically, experience in doing that kind of photo manipulation for so many years. This disconnect shows up a lot in evaluating design work with clients. To them, my evaluations may seem arbitrary and subjective, and I have to remember that they probably can’t see everything I see. That puts the burden on me to build that trust so that they’ll come to rely on my eyes.

I really could just go on and on about Shop Class as Soulcraft, but I’ll end with this. I recommend its 238 pages to anyone open to deeper meaning in the things they do, be it professional or weekend DIY. Taken early enough, I think it can be both an inoculation against the cliche of the mid-life crisis and a renewal of the value of actually doing things with our own two hands.