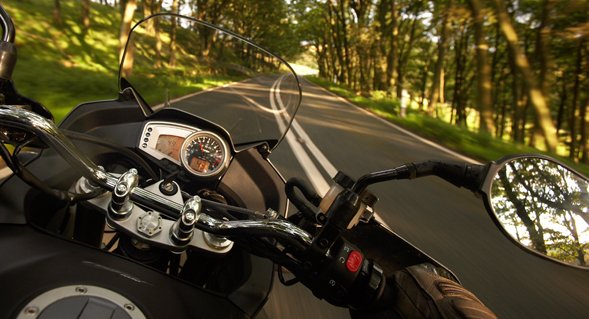 I’m a scooterist at heart. I love the sheer economy, the rich and quirky history, the goofy subculture, and how easy it is to just chuck a scooter around town. I pull for the Mods when I watch Quadrophenia. My first scooter was a Vespa P200E, and one of the first things I did was paint a Union Jack on the tire cover. Even now I’d really like to get a Stella and completely mod it out — cover it in mirrors, lights, and british iconography. Then find myself a ratty green parka and put some armor in it. However, mod aspirations aside, I must admit a deep, dark secret.

Not a cruiser, not a crotch rocket, not a motocross bike, but a full on Brighton Beach, rocker-boy Café Racer. The quintessential anti-scooter. Woe is me. At least I’ve got enough sense to stay away from anything truly vintage. I won’t be hunting down an old Norton or anything. There are modern equivalents, more specifically the Triumph Thruxton. It really couldn’t get much more modern vintage than this. Just like the iconic Thruxton one-offs of the sixties, Triumph’s newest incarnation is literally a Bonneville with the bars dropped, the foot controls swung back, and the speed hump rear fender.

But unlike its vintage forbearers, the 2008 Thruxton is fuel-injected (although the throttle body is cleverly disguised as a twin carburetor), has disk brakes front and back, and is electric start. The only downside is that EU noise and pollution standards have neutered the exhaust note. That’s easy enough to fix though. At just 900cc’s, it’s not some monster bike with more power than sense. Putting just under 70hp through the rear wheel, it reminds me a lot of the MINI. Sporty, pretty lightweight, minimal, elegant, and way quicker than it ought to be — more than the sum of its parts. Beyond that, it follows a classic definition of what a racing bike is. It’s not a crotch rocket, but it’s the crotch rocket of 50 years ago. That makes for classic motoring, and I find that really appealing.

I love the look of this thing! I just can’t get over it. I’ve been by the Triumph dealer here in town now a couple of times for some showroom butt time on the Thruxton. It’s not a bad fit at all. I took the mrs with me this weekend and even she got the Triumph itch. Although I just can’t imagine the fit of laughter we’d get from her dad, a die-hard Harley Sportster guy, if we pulled up on a retrofabulous british bike.

So the conundrum. What I wonder about is whether or not I’d actually enjoy riding a proper motorcycle, let alone the drop bars and rear controls of a Café like the Thruxton. I could of course go more modern — go with a Streetfighter like Triumph’s Speed Triple — what the Café Racer ultimately evolved into. But it’s not really a matter of style that has me wondering. It’s because it’s a motorcycle. I have no problem with shifting. Every car we own has a manual transmission and we fight tooth and nail to keep it that way. It’s only our scooters that are automatics. That first scooter, the Vespa, was a manual-shift 4-speed with the shifter on the left handgrip. That didn’t bother me, per say, but being new to the whole two wheels and a motor thing, it did get in the way of the fun factor. I remember a chilly Sunday ride this last march where I was out on the Vespa, had ridden about an hour, and realized that if I didn’t have to deal with all the shifting and the rickety nature of that old scooter, I would enjoy riding an awful lot. The previous few days, I’d been helping the mrs break in her new Buddy 125 and couldn’t help but notice how nice it was not to have to fuss with gears. What I later came to realize, once I’d sold the Vespa and bought the Blur, was that I’d been attracted to the Vespa as much as a fashion item as a vehicle. I loved its vintage mojo. I loved its classic lines. I loved its sexy curves and the way it always smelled like old metal, spent petrol, grease and rubber — like an old Spitfire in a museum. I wish I still had that Vespa, although I don’t really miss riding it. It had horrible brakes, was ass-heavy, and clunked in 3rd gear in a way that really startled me every time it did it. Would a Triumph just face me with the same disappointment? Would I love owning it and looking at it more than riding it?

The thing that lags in my mind is whether or not my newness to riding was really the issue, not the actual complexity in the grand scheme of things. I’ve got nearly 6000 miles of riding under my belt since I took up riding scooters and my comfort level with my riding abilities is worlds beyond where I started. I’ve ridden lots of scooters, but still haven’t been on a proper motorcycle. Would I like it? I guess that’s the question I’ve got to get answered. Flip-selling a $1,500 Vespa isn’t a big deal. Hell, I made a little money on that transaction. But getting invested in $6,000-$12,000 worth of real motorcycle is a different enterprise.

I think the answer is going to be in hopping on the Blur, taking the riding test to get my full endorsement, then dropping $75 on renting a motorcycle for a day. I suppose then I’d know. I’d scratch the itch and either satisfy it or spread the rash. I’m pretty sure I know which will happen.

Either way, I have no doubt that I’ll never be done with scooters. Neither a Thruxton nor a Speed Triple could replace the practical commuting bliss of my Blur. They’d share the garage for sure. I’ve also got just as much desire to have a Stella in the stable. Hopefully it and the Thruxton wouldn’t get into any fights. A whole fleet of two-wheelers. Yeah. I like the sound of that.