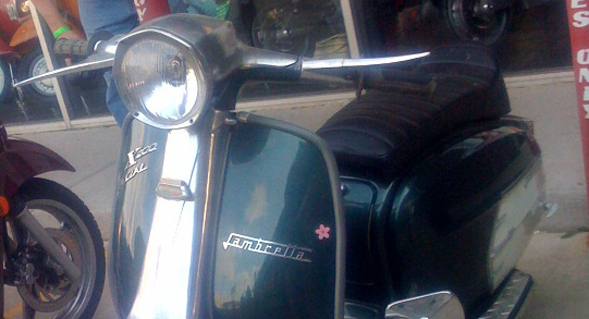 Day One — A year ago, my scooter obsession hit fever pitch. I have always loved the idea of scooters ever since I saw my first Honda Elite when I was a kid. It looked like a spaceship. Like a spaceship that could take me anywhere. I also distinctly remember a credit card commercial from my youth where a blonde musical artist, whose name escapes me, was so proud that she’d found the perfect vintage Vespa for her husband. “He’s just going to love it.” I remember being completely enamored with that sky blue, curvy Italian dream machine and wishing that she were surprising me with it instead.

But one year ago this week was when I attended the 2007 Rattle My Bones Twin Cities Scooter Rally. I registered, paid my $25, got my wrist band, bought raffle tickets, observed the gymkhana, all without actually being a scooter owner. But whilst I lurked, I talked to a plethora of people about what they were riding and what they’d recommend to a new rider like myself. What I didn’t expect was to find such a rich subculture of scooterists and such an active community here in the Twin Cities. Three months later I was the proud owner of a curvy, silver Italian “wasp” that had been ’round longer than I’ve been alive. Fabulous.

This last weekend was Rattle My Bones II. This year, I actually own a scooter. What’s more it’s my second scooter, a Blur 150 by Genuine Scooter Company. To top it off, it’s for sale so that I might purchase the Aprilia SportCity 250 I test rode last week. But I must say, real participation beets simple bystandery any day. I had such an amazing time.

Leading up to the rally
Beyond simply showing up to the rally this year, I was lucky enough to be involved in the ride planning process. Not in the sense that I planned the rides, but more specifically I volunteered to be a ride blocker. There were a grand total of seven rides scheduled for this rally. The biggest of which being a 75 mile urban parade route through the twin cities starting north of downtown Minneapolis, winding its way west looping around Lake Minnetonka, back across the southern part of the Metro, and ending in west St. Paul near the Mississippi River. We were anticipating at least 200 scooters to participate in this main event group ride, and that meant we’d need to block intersections in order to keep the group together. Joe, our ride leader, organized several preliminary rides and blocking meetings so that those of us who were new to this manner of scofflaw riding could do so safely and effectively. More on blocking later.

Day 1 – The scavenger hunt
I must admit, I didn’t participate in the Thursday night scavenger hunt. This is for two reasons. A) I abhor scavenger hunts. But more importantly B) all of these events are starting at least a 45 minute ride away from where I live in Eden Prairie. So I’m not making the trek out to downtown just for this. People had fun though, and more power to them.