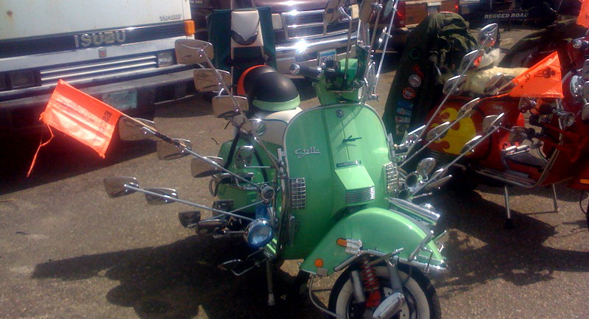 Day Three — Blocking is my new favorite thing. Last year, when I attended the Rally without a scooter, I had a great time. My favorite part was the gymkhana — a scooter obstacle course and no, I’m not making that up. What I didn’t do, because I was sans-scooter, was participate in any of the group rides. I didn’t have the nerve to ask anybody to let me ride cupcake, so I pretty much just sat that part out. Boy was I missing out!

Here’s the thing. All practical use aside, riding a scooter is really, really fun. The only thing more fun that riding a scooter, is riding a scooter in a group. I learned this months ago after joining the Heck’s Angels, only to have it further reinforced during what I can only describe as Pizza Lucé rides. There’s something really exciting about zipping along with a group of a dozen or so scooterists, in staggered formation, all growling and snarling in the least intimidating manner possible. The looks you get from other cars, from pedestrians, and other 2-wheel riders are just classic. Basically, it’s a big grin parade.

But here’s the other thing. The one thing that’s more fun than riding a scooter in a group, is blocking a group scooter ride. Blocking involves a small number of scooter riders going ahead of the group and literally blocking traffic so that the group can continue to travel as an uninterrupted pack. The larger the group of riders, the more essential it is to have good blocking. In essence, blockers are escort riders. For example, whenever the presidential motorcade travels anywhere, there are blockers — often on motorcycles. These blocker travel ahead of the motorcade to clear the intersection before the motorcade gets there. That way if the light changes, or traffic pics up, the motorcade doesn’t have to stop and no other cars can encroach on the motorcade and split up the cars from each other. We did the same thing for the big RMB ride.

Now when I say big ride, I have to clarify what I mean. This was a BIG ride. Most of the weekend rides I end up going on never have more than 10 scooters in them. That makes for a riding formation about the length of a city bus. Not bad. Pretty manageable in traffic and rarely do we try to block these rides. For the big Saturday rally ride, we expected at least 200 scooters. What we got was more like 230! Our formation accordion-shifted between being about half a mile long to being nearly two miles long! Even if you get to an intersection just as it turns green, there’s no way you’ll get everybody through before the light changes. And stop signs? Forget about it! It’d take all day to move 230 scooters through a 4-way stop a pair at a time. It’s imperative that the ride stay as a group so that nobody gets separated and everybody arrives at the same place. Because realistically, in this ride of 230 scooters, only about six people actually know the route. Then there was the route itself. 75 urban miles. We slotted out about four hours to do the whole thing and that’s pretty much exactly how long it took.

We had about a dozen blockers, which turned out to be perfect. Each blocker was decked out with “escort” flags on their rear-view mirrors, and a big orange safety vest. We really did look official. The way this worked was that all of the blockers would start up at the front of the pack. As the group approached an intersection, between two and five blockers would ride ahead. If the light was red, we’d wait. It’s fine for the ride to stop as a group, we just want to make sure that group doesn’t get split up. Once the light turned green, blockers would block the lanes of traffic that would have the right of way once our light turned red again. That way those cars couldn’t encroach on the group and break the formation, or worse, run over somebody. And when I say blocking, we would literally put our bodies on the line — parking our scooters at 90º to traffic and barring their way.

It’s not often that I ride my scooter at more than twice the posted speed limit. It’s even less often that I would ride it into oncoming traffic — i/e on the wrong side of the road (what is this, england?). But when you’re blocking, you get to do both. Because the ride was a mix of large and small displacement scooters, the pace was kept below 30 mph for the duration so that smaller, 50cc scooters would be able to keep up. This was also advantageous to the blockers, who needed to zoom up to the front of the mile-long formation. We really were very safe about it, but it was risky business for sure. The blockers would essentially ride the center stripes to the left of the big formation until oncoming traffic came along. Then we’d duck into the formation itself and hide out until it was clear again to move forward. This was so much fun I can barely put it into words. There we were, just BLAZING past hundreds of other scooters, often in the oncoming lane, and just feeling like fighter pilots the whole time. Though the risk really was adequately managed, doing that for nearly four hours of total riding was a thrill I don’t know if I’ll ever top. I put what felt like years of riding experience under my belt in only a few hours. After the ride, I felt not invincible, but expertly competent in riding my scooter. I knew exactly how fast I could accelerate, now sharp I could turn, how hard I could brake. I and the Blur were one — a fusion of man and machine.

Throughout the ride, blockers would relieve one another as much as possible so that no blocker would have to make the whole journey from the back of the pack to the front very often. If I’d blocked all the way to the end of the group, chances are other blockers have already locked down the next intersection and the group is already making its way through. If I make it half way back up the group, it makes a lot more sense for me to relieve those blockers so that they only have to traverse half the pack, rather than the whole thing. Luckily we had enough good blockers present that we could leap frog about three intersections at once. We were a well-oiled machine and the camaraderie grew very strong amongst the blockers. We watched each other’s backs and made ways for those behind us to make it to the front safely.

It paid off. The 75 mile ride went off without a hitch. We only had a couple of break downs, and there were no wrecks or even really any road rage. For several days afterward, as I fell asleep at night, I’d have little mini-dreams that I was back blocking the big ride again. Seriously, such a thrill. After leaving the day’s festivities, I had to really check myself and remember that now it was time to obey the traffic signals again. Stop sign. Check. Speed limit. Check. Right lane. Check…