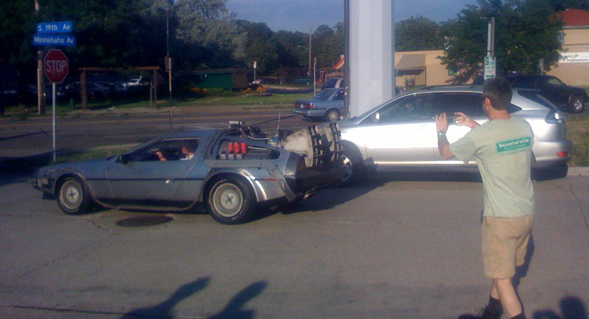 Day Two — “Hey Marty, hold up!” No sooner did we return from the history ride was it time to head over to Scooterville for the evening rides. This would be the first time most of the rally group would converge. Four separate rides would leave Scooterville around 7:00, weave their separate routes, and then re-converge upon BlueCat Motors in St. Paul.

Scooterville sits on a little U-shaped street that leaves and then re-joins Cedar Ave. There are several bars and clubs on this U and even another motorcycle shop. So whenever you’re at Scooterville, there’s always something coming around the U to get back onto Washington/Cedar/Minnehaha Ave. While we were gathering for the evening ride, some guy rolled up in a Delorean tricked out in fabulous Back To The Future fashion. I would hope that there’s even a Flux Capacitor inside. What was even more entertaining though, was how at least half a dozen people with cameras in gun holsters rushed the street to grab a photo of the guy as he waited to turn at the stop sign. I bet he gets that a lot.

I rode with the newbie ride since the organizer had asked me to block for this group. I’m really glad I did because not only was this ride a nice, scenic cruise down the Mississippi River parkway, blocking for it was a great warm-up for the big ride coming up the next day. Even though Joe had explained the ins and outs of blocking several times, it wasn’t until I actually did it that it fully clicked for me. 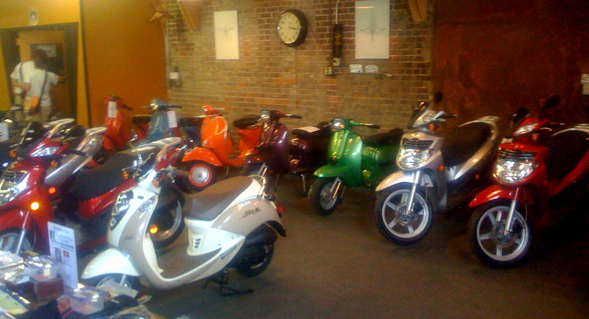 We arrived at BlueCat without incident and I’d only managed to miss-block one intersection. I remarked to Lora, one of the other blockers, that if a mistake is a “cock-up” and that mistake were made while blocking, was that “cock blocking?” A new term was born, or at least re-coined.

BlueCat is a cool little shop. They will work on anything with two wheels and a motor. They sell everything from classic british cafe racer motorcycles, to beautifully restored Lambretta scooters, to vintage Vespas, to custom choppers, to modern SYM scooters from Taiwan. Their shop has such a great, non-boutique, urban grit to it. The guys are really approachable and in an era where motorcycles and scooters alike have a lot of pretense, BlueCat is refreshingly approachable and non-commercial. There was a DJ spinnin’ some classic jams, a BBQ fired up making burgers and dogs for anybody who’d eat them, and coolers full of water and beer. Kate and I ducked out after 10:30 or so, but the atmosphere was nice and chill and it looked like everybody was having a great time.