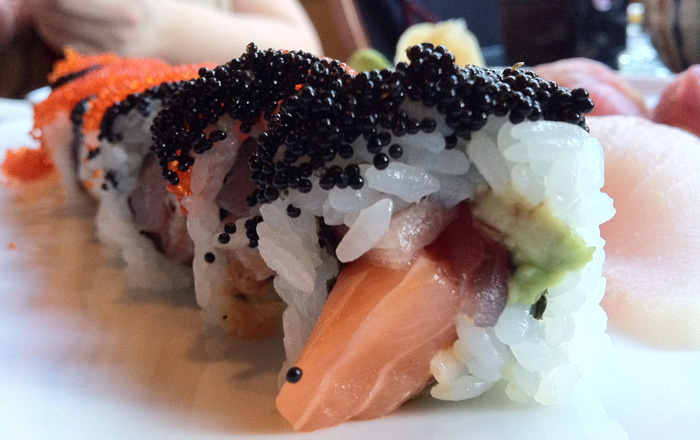 I’m a big fan of Anthony Bourdain. From his breakout book Kitchen Confidential to his fantastic Travel Channel show No Reservations, I don’t know of anyone doing better experiential non-fiction writing right now. Because of my own trip to Asia in 2005, I’ve always been able to appreciate and relate to his traveling, and just how eye opening it can be to immerse yourself in another culture. Unfortunately though, I’ve never really had a good point of reference for Bourdain’s gastronomic adventures. That is, until last night.

Yesterday afternoon, I met my dear friend Susan for an afternoon interactive marketing event in downtown Minneapolis. The event was unfortunately little more than a couple of sales pitches, so once the final speaker wrapped up, we headed out to grab some food. What I had in mind was perhaps a burger at one of the 1st Avenue bars. Susan had a better idea.

“Have you ever had sushi?”

As is always the case with me, I couldn’t give a simple answer. I have had sushi before, sort of. I had what I was told was sushi in a fusion restaurant in Seoul, South Korea. My entire Korean escapade is very blurry. Between the jet lag, the soju and the culture shock of being a 24 year-old white kid on another continent, I couldn’t fully appreciate everything I experienced there. I couldn’t remember the sushi I’d had in Seoul other than knowing that it was one of the many foreign things I ingested during my weeks in Asia.

Thing is, I’ve been wanting to try sushi again. There’s a chapter in Kitchen Confidential where Bourdain describes his time as the guest chef for Les Hales in Japan. One of his friends takes him to a back alley, hole-in-the-wall sushi joint with a mythic reputation. There he has what he describes as the best meal of his life. Often on No Reservations, Bourdain will encounter amazing sushi in other places and describe a transcendent food experience. I’ve been increasingly jealous of those experiences lately. Not just with sushi, but the whole notion of food so sublime, it doesn’t matter what it is. I’ve long wanted to cross that bridge where what I’m tasting transcends what I’m eating.

There’s a complication, though. I have what appears to be an allergy to tuna. It feels kind of like asthma — like I can’t get a deep breath. If it’s really bad, I’ll get pretty nauseated. I’m even now still trying to work out of it’s tuna specifically, or fish as a category. I’m hoping the former.

Wanting partly to explore that possibility, and partly longing for a Bordain-esque food experience, I asked Susan to lead the way. She brought me to Nami, a lovely little place with a wonderful interior dichotomy. On the left, a bustling bar full of thirsty sophisticates. To the right, a serene arrangement of tables bathed in the lingering blue light of early spring sunset. We took our place at a lovely window table.

I placed myself completely in Susan’s menu care. She started us with a bowl of edamame — boiled soy bean pods topped with sea salt. I thought they were snap peas at first, but turns out you don’t eat the chewy outer pods. The edamame, like the rest of the meal to be, was wonderfully refreshing. Susan gave the waiter our order proper. We ordered a tiger roll (rice, salmon, tuna, yellowtail, caviar), nigiri-sake (rice, salmon), nigiri-hamachi (rice, yellowtail) and nigiri-toro (rice, fatty tuna). I started with the nigiri-sake — a lovely slice of pink salmon on a small bed of rice, with a smear of wasabi in between. The blend of textures and subtle flavors was a revelation. Until then, my favorite culinary experience had been the Korma dishes I’ve found in quality Indian restaurants. Where the Korma is an explosion of spices and flavors, the nigiri-sake was all subtlety. The mixture of textures and the overwhelming freshness of everything was so unlike what I’m used to eating. It wasn’t salty, it wasn’t sweet. My brain had nothing in its library to catalog or reference what I was tasting. The flavors were the epitome of freshness — not quite plant, not quite animal.

Next came the nigiri-hamachi. Like the sake, this lovely cut of fish lay atop a dollap of sticky rice with just a dab of wasabi between the two. My natural instinct was simply to cram the whole thing in my mouth. Thankfully Susan was there to show me the way. I bit through the first half of the nigiri-hamachi and still don’t have the words to describe it. Each chew meant a new explosion of flavor and texture. This was beyond food. This was getting exciting. Susan watched my face and laughed delightfully at me as I lost control of myself. A great mystery was being revealed, and Susan was as excited as I was to not just be eating this wonderful food, but to have brought a new soul into the sushi faith.

The last thing on our plate was the tiger roll. This colorful row of mysterious content was what I’d always thought of as sushi. This mix of salmon, tuna, yellowtail, rice and most importantly, caviar — another first in a meal full of them. Susan checked in with me, wondering if I’d be weirded out by eating tiny black and orange fish eggs. With what I’d already put in my mouth, I didn’t care what anything was anymore. Tell me it’s squirrel. Promise me it’s the ass end of a seagull. I didn’t matter.

The first slice of tiger roll was a revelation — definitely the best so far. The combination of flavors, and especially the texture and saltiness of the caviar, made each bite an adventure. With my last slice of tiger roll, I dipped a corner of it in a small bowl of soy sauce. I thought this would be but an incidental difference. I was wrong. I don’t know how to properly describe that bite of sushi without using sex as a measuring stick. Let’s not go there. It was good. Very good. That’s all I’ve got.

In full-on food adventure mode, I was ready for the final course. Before we ordered our first course, Susan had given me the rundown on her favorite sushi dishes. We’d already sampled most of them, but one remained: eel. Yeah, eel. You see, I’m not allowed to have eel (at least, I think I’m not allowed to have eel). Though I didn’t grow up jewish, I did basically grow up kosher. It’s a long story, and not the point, but it informed my hesitation. Had I been offered this caterpillar roll (eel, rice and avacado) at the beginning of our meal, I just don’t think I would have gone there. By this third course, however, my mind was all Peter, a blanket full of forbidden foods, and a simple command from God Himself. “Eat.” 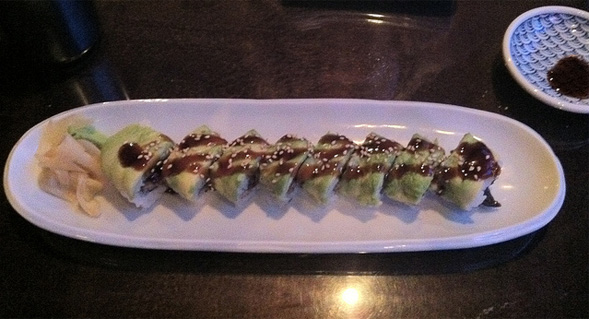 Susan was definitely excited now. Our excellent waiter brought us yet another rectangular plate of beautiful food. I didn’t need a prompt. I didn’t pause to think about what I was cramming into my mouth. I was in the throws of a true gastronomic experience. What I’d eaten to up to then had realigned my entire perception of food. The eel, however, blew all of what preceeded it right out of the sea water. In-fucking-credible.

“I want to sit here and eat this until I die.” I told Susan with absolute, iron-clad sincerity. Susan clapped and laughed her boisterous, terriffic laugh. We high-fived and set about enjoying the rest of our eel. Magnificent.

Sitting at this lovely table, with one of my favorite people, having the best meal of my life, I felt a wonderful sense of the present. It was so eternal. I had nowhere I needed to be. Nowhere I was anxious to get to. Nobody needed me for anything. The Mrs was at the gym and we’d meet up at home later. I was there, in that meal, and its moments of serenity and ecstasy had unfolded in slow motion. The closest thing I can compare it to is the feeling I get when I’ve been on a motorcycle for a few hours — long enough to let go of time, to let go of all those things in modern life that don’t really matter. That night, Anthony Bourdain had nothing on me, but just like he says in the intro to his show, I’m hungry for more.