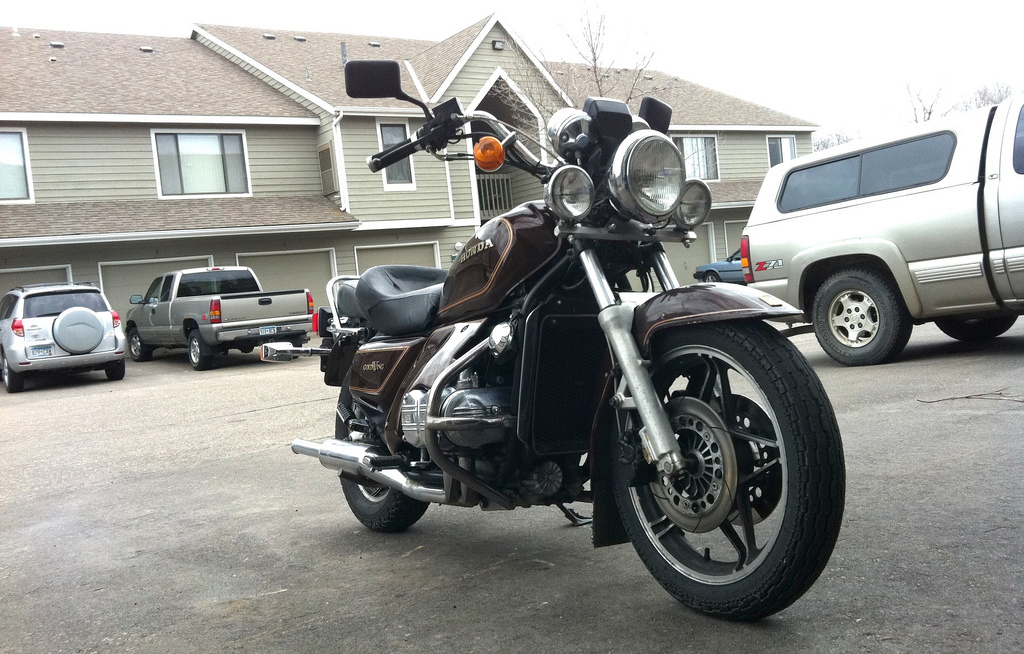 Buying a nearly three decades-old Honda Goldwing is not an easy decision to explain. I wonder about it myself sometimes. Sure, I’m a big guy and it’s a big bike. That part of it is simple. I wanted to take longer rides, including cross-country adventures, so that makes sense. The Godlwing has defined touring motorcycles since its inception in 1975. However, none of these practicalities really make sense in the context of the sheer ridiculousness that is the Honda Goldwing. Everything about it is huge and complicated, and my ’83 GL1100 Standard is actually small and simple by the standard of today’s Goldwing — a machine that is more spaceship than motorcycle. As brilliant to ride as the Goldwing was reported to be, I was unprepared for just how challenging this old beast would be to work on.

From a mechanic’s point of view, a Goldwing is kind of a nightmare. They’re brilliant machines — absolute triumphs of engineering, but they’re a motherfucker to work on. Everything is half again as complicated as it would be on a normal motorcycle, and takes at least twice as long to access and reassemble. That’s what happens when you put what is essentially a small car engine into a motorcycle. It’s a brilliant powerplant, but it’s the heart of a difficult beast. Because of that engine, the carb setup is more complex than normal 4-cylinder moto motors. Normally accessible items such as the clutch are nearly impossible to get to on the GL without pulling the whole motor or taking the entire back end apart. You have to pull the shocks to remove the rear wheel. There are linked brakes and convoluted anti-dive systems in each fork. The list goes on and on. These things are tricky enough on a regular bike. On the Goldwing, you’re in for it.

This is why Jeff, my mechanic mentor down at BlueCat Motors, flatly refuses to work on them. I’ve watched him turn them away at the door over and over. “No Goldwings. No. I don’t care. No.” He has good reasons. Goldwing customers are rarely willing to pay for the time needed to actually service these monsters. He can’t make any money on them and past experience with Goldwing service has given him a definite anti-GL bias. They’re trouble. Most of their owners are overly particular and obnoxiously spend thrifty to boot. I get it. To his credit though, when I got interested in a GL1100, Jeff agreed to help me with mine — provided I did all the work. I’d get a pass and my GL would be the one and only Goldwing allowed in the shop. A privilege indeed.

The machine I acquired needed some love. This 1983 Honda GL1100 had 48,000 miles, worn tires, and at least a season’s worth of dirt and muck all over it. What’s worse, the OEM headlight and blinkers were gone. In their place, a hideous bodge job of three Harley Davidson headlights and a pair of awful handlebar blinkers. The front wheel was off the wrong Honda. The grips were rotten and molting. At least it ran though. The bike started well, pulled like a dragon and except for a rough shift between 1st and 2nd gear (which I blame on a worn clutch), the bones of the machine were solid. Most importantly, this particular GL1100 had a pair of ultra-rare body side covers sculpted into the engine’s opposing jugs. Truth be told, I bought this otherwise inferior GL just to acquire those side covers. I’m not afraid of a little wrench work though. I regret nothing! The first order of business was getting the front wheel sorted out. The guy I’d bought the bike from had another big Honda in pieces. This wheel had a better tire on it than the GL’s 11-spoke rim, so rather than changing the tire, he just changed the wheel and kept riding the bike. I’d insisted on taking the correct wheel with the bike, because these 11-spoke mag rims are one of the key reasons I bought the harder-to-find 1983 model over more plentiful GL1100s from 1981 or ’82. The gearing is higher too, but that’s another story.

Just a couple days old, I delivered my new GL to BlueCat Motors to swap the presumably good tire on the incorrect wheel onto the rim that belonged on the bike. In the days between when the bike arrived and my moto dojo appointment, the rear tire actually went flat while the bike sat. Turned out the rim was leaking at the bead. By the time we got the old boy on the lift (which struggled noticeably to hoist the GL’s 640 pounds), I was ready to get my hands dirty. I first pulled the rear wheel. Being a GL, this was complicated, of course. I had to pull the rear shocks in order to clear the rear axle over the exhaust pipes. Even with the wheel loose, I had to further jack up the bike on the lift to get out from under the fender. This first task set the stage for all the work to come. It wasn’t impossible, but it took much longer than expected.

With the wheel off, Jeff unmounted the tire for me on their tire machine and I then spent an awkward few moments bellying the rim up against the wire wheel to remove the old, leaking rim sealant. Fresh, black goop was applied to the bead and once we got the tire back on, it was finally holding air. I wrestled the rear wheel back into place, but even reassembly wasn’t easy. What had I gotten myself into here? The front wheel would prove no less complicated. The ’83 GL’s front forks have a brake-activated anti-dive mechanism built into the bottom of both front forks. The brake calipers bolt half to the fork, half to a cantilevered mechanism trailing behind the fork. That mechanism actuates a small piston and spring that essentially pre-loads the front suspension as you put on the front brakes — keeping the nose from diving. What it means for removing the front wheel is that in addition to disconnecting the speedometer cable, you’ve got to disassemble the anti-dive connections in order to remove the brake calipers. None of it’s that hard, it’s just one thing after another. It’s twelve steps instead of two. I was starting to see the pattern — starting to understand what Jeff was talking about.

With the wrong wheel finally off the bike, we were about to swap the good tire to the correct wheel. Of course no sooner did we have the wheel off the bike, Ryan took a closer look at the supposedly “good” tire. While it had plenty of tread left and no visible weather cracking, the tire was a cheap chinese brand that Ryan recognized for having a bad reputation. “Apparently they’ll just blow out the sidewalls at random.”

Shit. We didn’t even bother to swap the tire at that point. I wasn’t going to keep it. So the correct rim went on, worn out old white wall tire and all. At least now the bike had most of its original parts back.

Ryan checked the rear tire and same thing — same crappy brand of disposable tire. This wouldn’t do at all. What’s more, while removing the wheels, I had a chance to inspect the brakes front and rear. All three sets of pads were either chewed to hell from incorrect, novice screwdriver prying, or were paper thin. The rear rotor was badly grooved. Half the hardware in the anti-dive mechanism that ties into the front brakes was improvised with stacks of washers offsetting bolts that were too long. Rubber boots were missing. Pivot pins were rusted and scored. There was no caliper lube on any of the brake components. Not good. The bike was much less road worthy than previously thought. Not unsafe, just not healthy. Instead of buttoning up the bike and getting ready to ride it, our moto dojo session ended with a clipboard, a pen and a parts sheet. Not quite what I originally had in mind.

All in all, my GL wouldn’t need that many parts, and nothing too exotic. Tires, brake pads, caliper and master cylinder rebuild kits, carb kits, grips and a few other odds and ends would have me sorted. I’d be out a few hundred dollars, but that’s the beauty of old Japanese motorcycles. I didn’t have much money in the old sled to begin with. It was the start of a waiting game for parts, but more importantly, it was my first taste of what it’s like to work on an old Goldwing. Jeff wasn’t kidding. Even the simplest things are a real undertaking. The question at that point was simple. Would the big Honda live up to all its hassle once I finally got it back on the road? Had I made a good choice in the naked Goldwing, or was it a fool’s chariot?