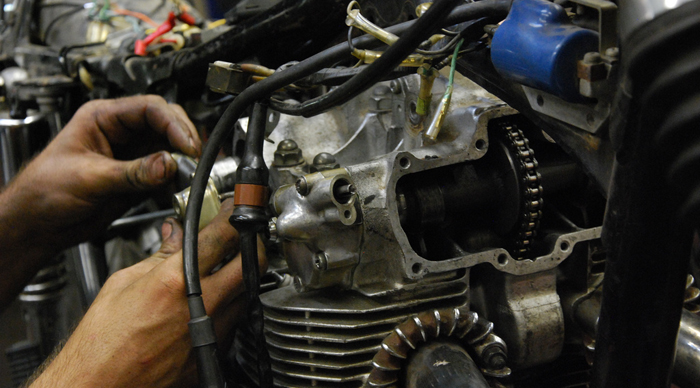 In our initial repair session with my 1974 Honda CB450 Supersport, Jeff and I were confident (if incorrect) that the engine had avoided disaster during it’s timing chain misadventures. Good compression and correct cam timing meant we were that much closer to getting the old pony running. In a follow-up session, we’d sorted out the control wiring and the front brakes and now it was time to take care of the last couple of adjustments the engine would need before we could close up its cam covers. We needed to set the valve clearance and the ignition timing. From there, it’d be a domino of things. With the cam covers back on, I’d be able to reinstall the carbs (once they were clean). Then, I could put the intake tract back together, replace the battery, and we ought to have a running bike. My goal was to have the CB450 ready for the Bearded Lady Motorcycle Freak Show a few weeks away. I don’t mind spoiling the fact that we didn’t make it, but boy did we try.

First we needed to set the CB450’s valve clearance. In most 4-stroke engines, the valves that let gasses into and out of the engine are shaped kind of like the stem and base of a wine glass, with the base essentially plugging a hole that matches the contour of the valve. They’re held shut (up) by springs, and then the oval shape of the cam lobes push against those springs to basically un-plug the hole. Most of the time, this is accomplished through a rocker arm, sometimes called a cam follower or tappet. (Fun side note: when Tom and Ray on NPR’s Car Talk refer to themselves as “The Tappet Brothers”, they’re referring to this engine component.) The cam lobe pushes on the follower, and the follower pushes down via cantilever on the valve, against the valve springs, and opens the port (the hole) to either let air and fuel in, or let exhaust gasses out. The space between the top of the valve and the cam follower or tappet that pushes on it is referred to as valve clearance. Too much gap and the engine will make a clattering noise and you’ll lose some amount of power and efficiency. Too little gap and the valve may not close all the way, and explosions of combustion can literally “burn” the valve, coat it with soot and even cause it to stick. The problem is that most motorcycle engines tend to get “tighter” as you put on the miles. So if you ignore your valve clearance service intervals, you’ll end up burning up the valves. On the CB450, the valve adjustment is especially critical given the nature of its design*. Rather than a more traditional lock nut adjuster built into the top of the valve spring assembly, the CB450 uses what’s called a torsion bar. And instead of setting the gap between the follower and the top of the valve, you set the gap between the other end of the follower and the cam lobe itself. The torsion bar adjustment mechanism is like a smaller, additional cam for each of cam followers. With the cylinder at top dead center, you loosen a locking nut at the end of each cam cover, then use a screwdriver to turn the cam to the desired clearance and retighten the locking nut. It’s a bit of an art, because on the CB450, you’re looking for a valve clearance of .0013″-.0015″, or about one-third the thickness of a human hair. It’s what’s referred to as a “zero tolerance” engine. And since valve clearance tends to tighten over time, checking the gap is a critical step in maintaining one of these high strung little twins.

The obvious question is, Why? Why build the motor to such tight tolerances? The über nerd engineer’s answer is that it’s to prevent “valve float.” But at the heart of it, Honda was a bit overambitious with this engine. The CB450 mill is essentially a racing engine made available for street use. That’s a big part of the continued appeal of these motorcycles, though. Right out of the box, you’ve got a small racing bike. But like any racing engine, you’re riding the razor’s edge between performance and disaster if you don’t take proper care of it. Jeff has a slightly different take on the CB450, which he’ll freely admit is one of his least favorite engines to work on. “Honda was showing off,” he likes to say. He’s not wrong. This little bastard is complex.

So with an impossibly thin little .0015″ feeler gauge, I started jabbing at the cam lobes feeling for the gap between them and the follower. The exhaust side on cylinder #1 came into spec pretty easily. Jabbing then at the intake side, I turned the adjusting cam feeling for tightness. No joy. At no point in the torsion arm’s rotation did the cam follower pinch my feeler gauge. Jeff and I investigated — shining a small light onto the sliding surface of the cam follower.

There was a flat spot on the cam follower about a quarter of an inch wide. The engine had been left too tight for too long and worn down the follower. Better the follower than the cam, but that still meant we needed to replace that follower. Trouble is, they don’t exactly remanufacture cam followers for 40-year-old motorcycles. Thankfully, Jeff had a couple of junk CB450 motors, one of which had good cam parts in it still. It always surprises me how generous Jeff is with stuff lying around the shop. He’s never daunted. If the right part is on the shelf or in a pile, it finds its way onto my bike before I even have a chance to object. We mixed and matched cam parts until we had a top end that was as close to spec as an old motor is going to get. Rechecking the cam timing for the third time, it looked like we finally had an engine that might run. Progress had come slow, as it had all along, but I was still very encouraged by the old machine. We called it a night, but we were getting closer. By this point, I’d rebuilt the carbs as completely as I could (that’s another story) but was still waiting on new gaskets to come in. This would take about six weeks as apparently the whole country decided to rebuild their CB450 the same time I did. Carb kits were hard to come by. In the meantime, I kept looking at the calendar and watching the season slowly roll by. With my GL1100 waiting on its own crop of parts to come in, I had nothing of my own to ride. First world problem, right? Still, there was something quietly frustrating about spending a lot of time and effort working on my bikes, yet not being able to drink the sweet wine of riding them. Little did I know, this would be the story of my entire season. Well, almost.

*I know this, because Jeff knows this. I am not some sort of engine encyclopedia.