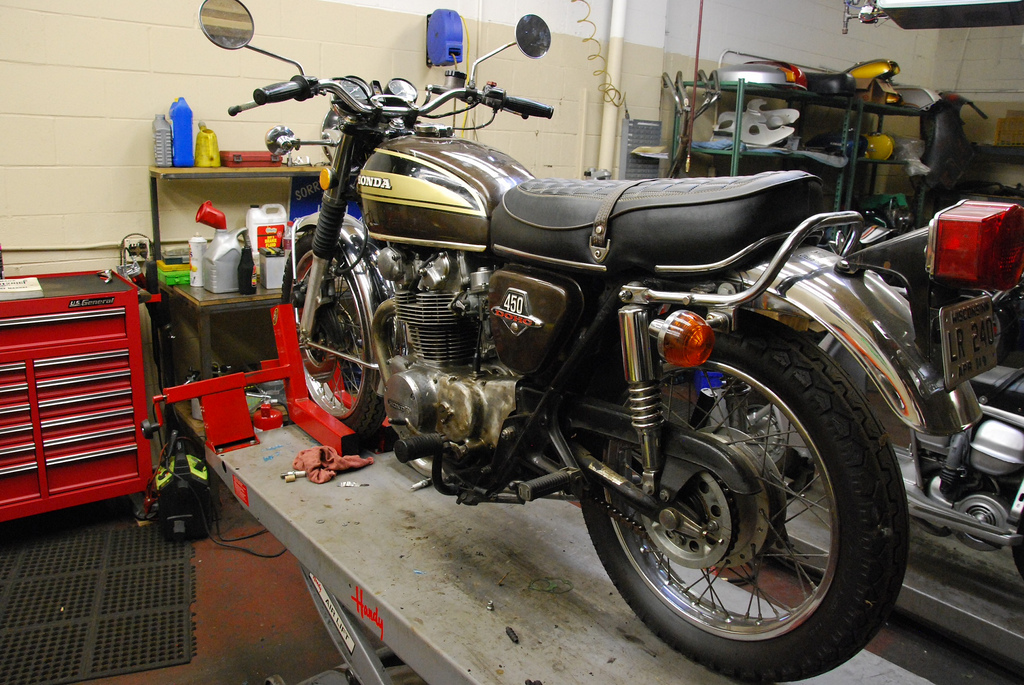 Air. Fuel. Compression. Ignition. These are the building blocks of internal combustion. In the correct ratios, they’ll turn common gasoline into noise, heat and best of all, speed. Speed was exactly what I had in mind as Jeff and I continued resurrecting my 1974 Honda CB450 Supersport. I felt like I was running out of riding season. I wanted to ride the bike to the Bearded Lady Motorcycle Freak Show, and we only had a couple weeks to go. My carb kits had finally come in. All I needed to do was install a couple of gaskets, reinstall the pair of carburetors behind the engine, set the timing and the bike ought to run. The key words there being “ought to.”

I set up a Thursday appointment with Jeff to have some shop time down at BlueCat Motors. The evening we chose turned out to have a separate significance. One of the guys I’d gotten to know down at the Cat was Andrew, their extraordinary parts guy. Seriously, the guy knows part numbers off the top of his head. I think you could read Andrew a VIN and he could tell you what kind of bike it was. That night was Andrew’s last night in town before shipping off to basic training and after that, officer’s school in the Army Reserves. He’d swung by to share a beer with the boys while Jeff and I reassembled the CB450. All things considered, it was a great way to spend an evening. The bike was coming together nicely, and good friends were gathered around the lifts bench racing and speculating at Andrew’s chances of getting shot at. Jeff and I got the carbs back on without any trouble. The 450’s split throttle cable was hooked up and Jeff showed me his terrifically analog method of syncing the two carbs to each other. On these older twins, there are separate idle set screws — one on the outside of each carb. These are used to first set the carb synchronization, then the actual idle speed. Carburetor synchronization sounds complicated, but like most things on old motorcycles, it’s just a fussy procedure addressing a simple principle. The idea is that on any multi-cylinder/multi-carburetor engine, you want all its carbs to be in sync. That is, you want them all to open and close in precise unison. If they don’t, then the cylinders are pumping unevenly and the whole motor is essentially out of balance. Newer engines are synchronized using gauges and vacuum readings, but on these older motors, you’ve got your fingertips and your eyeballs. With one hand on the throttle, and the other hand reaching over the bike to the carburetor opposite, Jeff showed me the technique. You watch the little arm on the idle set screw nearest you move up and down, while feeling the little arm on the the other carburetor with your finger tip. You open the throttle, watch for when the near carburetor lifts off of the idle stop while feeling for that same instant with your fingers on the opposite carb. Once they both lift off together, you’re done. It’s imprecise, but simple and close enough for an old machine like the CB450. Once the carbs are synced, both screws are turned out together to set the idle speed. Learning these little tricks of the trade are my favorite part of working with Jeff on these projects.

In the subtext of all our work on the CB450, there was one thing we weren’t quite sure how to handle: air filters. Jeff had originally thought they were available from Honda. Turns out they weren’t. This was a problem because it’s not just the filter elements themselves, it’s that the filters make up the inner half of the air boxes. When you’re trying to make a bike an everyday runner rather than a show bike or race bike, you don’t just bolt on a set of pod filters. The carbs and engine are designed to pull from air at a particular rate, from a still, restricted chamber. Pod filters look cool, but they let the engine suck in way too much air, and at a very high velocity with lots of turbulence. They’re fine for full-throttle performance, but pod-equipped, older bikes that idle well are few and far between. But with replacement air filters unavailable, that left two options: pods or something pod-like from the aftermarket, or rebuilding a set of worn out stock filters. Trouble was, I didn’t have either. I didn’t have pods, and I didn’t have a full set of stock filters or outer air boxes. I had one rotten old filter and one outer air box. And of course, they didn’t match. I’d attacked this problem on two fronts. I hit eBay for another filter and air box outer. I also managed to source a local set of foam uni-filters. These would have to do if I wanted to make it to Bearded Lady. I figured I’d start there and come back to stock filtration after the show. While not as free flowing as pods, the uni-filters are still more free-flowing than stock. Word on the online forums was that these uni-filters could be used without re-jetting. I was hopeful, but Jeff was skeptical. Any extra air flow, on top of the two-into-one race exhaust already on my CB450 would mean the bike would probably be running lean for sure. Re-jetting isn’t rocket-science, but it’s time consuming. At the time, it felt like Bearded Lady was 15 minutes away, even if it was actually a little over a week to go. So that night we attached the uni-filters and crossed our fingers. The tank went back on, and right after it, the seat. The bike was whole again for the first time in a long time.

Jeff had juiced up a new battery with acid and hooked up the jump box. It was the moment of truth — that moment when the bike would either fire or it wouldn’t. It was the moment of rebirth. We’d come so far, and now it was time to see just where we’d landed. The starter turned over. “Chunga, chunga, chunga, chunga, ber-LAMBA LAMBA LAMBA! GROWLLLLLLLL.” The machine fired to life. It ran, and it kept running. Jeff dashed from one side of the lift to the other, adjusting the idle and revving the motor. The bike sounded fierce. Being used to the raspy buzz of my wife’s CM400, the aggressive, racy growl of the CB450 was surprising. I knew it was Honda’s little street racer, but damn! Sound notwithstanding, I was just excited it ran at all. It seemed like a miracle. Andrew and the boys gathered around and marveled with me. “Sounds mean!” he said. It wasn’t all growl and guts though. The shop was quickly getting smokey and our eyes were starting to sting from the exhaust — tell tale signs of a lean mixture. What’s worse, the engine was starting to sound worse and worse the longer it ran. There was an intermittent high-pitched whine over the engine’s throaty growl. Jeff shut off the motor. “Looks like those uni-filters are pretty free-flowing” Jeff said. It was a very gentle “I told you so.” So much for my optimism. Looks like we’d have to jet the thing. It was getting late in the evening though, so we called it a night and closed down the moto dojo. I was frustrated to say the least. I wanted the bike done and was worried it’d just be one thing after another between me and Bearded Lady. Jeff paused my anxiousness with words of mechanical wisdom. “The bike is not going to go on your timeline. You have to give her the time she needs. Be patient.” I heard him, and I believed him, but I still wanted to attend Bearded Lady on my little brown Cafe Racer.

I went home frustrated and no less anxious. With a little more than a week to go, I had two options. I could improvise stock filtration and get the airflow back down closer to proper mixture. Or, I could jet the carbs. Truthfully, I didn’t know how to do that. I’d need Jeff and he had other bikes to work on. So option A it was. There was a problem though. I didn’t have a full set of filters and air boxes to rebuild. Jeff had generously given me two old filters and one air box he had laying around the shop. Trouble is, I needed two. Worse, the filter elements were shot. I had a plan though. It was time to improvise.

Air. Fuel. Compression. Ignition. I’d have them all, or go down fighting.