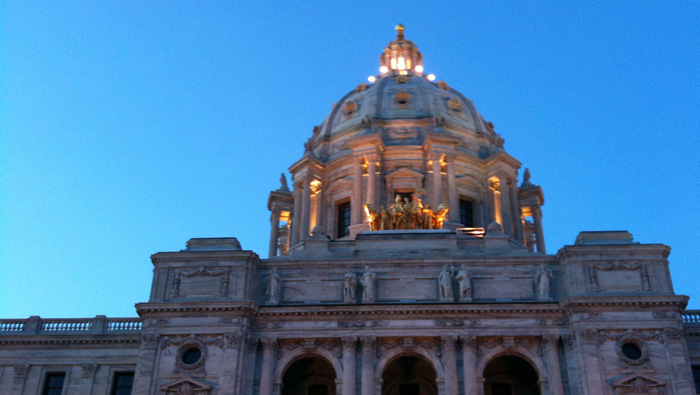 March 23, 2010 — In a lot of scooter cities, there’s a standing, weekly, come-one-come-all ride. In the TC, ride night is on Tuesday and it goes by the illustrious name of TNR — Tuesday Night Ride. Each year the ride meeting place oscillates between St. Paul and Minneapolis. This year, it’s St. Paul’s turn. Thing is though, in three years of riding scooters in the twin cities, I’ve never attended a TNR. That is, until tonight.

The only thing more fun than just riding a scooter is riding in a formation of good riders. The trick is finding a good group. Last year I had to quit riding with one of the local groups. The ride leader more often than not would lead the group into unsafe situations, such as oncoming traffic. It wasn’t until I started riding with a more hard core group of riders that I came to appreciate what it’s like to ride with a good crew. More than anything, it made me a much better rider. Several of the riders in that group are regulars at TNR, so my expectations were high.

The Mrs and I headed off to meet up with the TNR group where Summit Avenue meets the St. Paul side Mississippi River parkway. We arrived just as the group of six scooters were firing up to head out. With Scooterville Lora in front of me, we headed off on a whirlwind tour of St. Paul. Weaving our way down the parkway and then up several streets wholly unfamiliar to me, I was really frustrated with my rusty riding. When you’ve got good riders around you, the flaws in your own riding technique become painfully obvious. Trying to keep up with Lora as she’d rip around turns on her little Buddy 70, I felt like such a squid. If my Vespa weren’t so powerful, I would have been holding up the riders behind me pretty bad as I crawled through the turns. So shameful, but still a really fun ride.

Our route ended in downtown St. Paul right in front of the state capitol. The Mrs didn’t have a clear visor with her, so with darkness looming, we headed home. It was a great experience if for no other reason than getting to know St. Paul a bit better. But the real benefit, as always, was spending time on the streets with other riders. Though it was my first, this will definitely not be my last TNR. Perhaps I should spend this week rediscovering how the hell to ride my scooter!