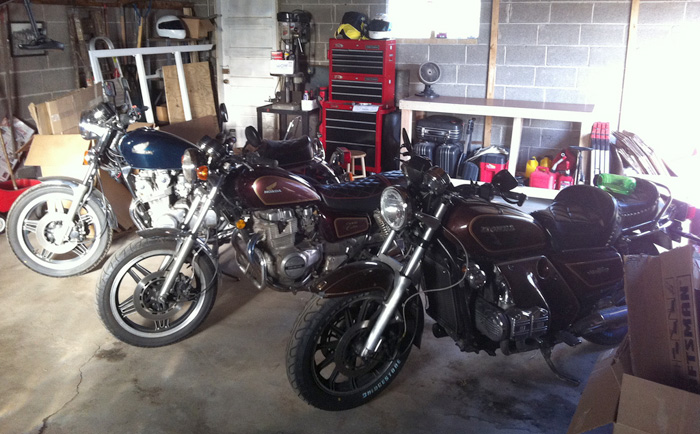 When The Mrs and I made the move to Chicago, we left our motorcycles in storage in Minnesota. Having the moving company take them would have put us over our relocation budget. Besides, it was winter, so it’s not like we could have ridden them around anyway. The trip back to retrieve them was not without its challenges, but thanks to some friendly help and some MacGyvering, we were able to get the fleet home safely to Chicago.

However, part of that move involved me trying to start my 1983 Honda GL1100 so that it might help us load its bulk into the moving truck. The old brute refused to run after his winter’s hibernation, so we were forced to recruit some extra hands and shove all 640 lbs of him into the back of the moving truck. We were successful, but that left me with a partly summer-ized motorcycle that, for what I could tell, wasn’t running. Remembering back to my 18 hour’s work in rebuilding the carburetors, the last thing I wanted to do was let sleeping bikes lie.

Before I could try again, I had some work to do. The battery had been run down in my previous starting attempt in Minnesota. Like most everything else on the GL, the battery is big enough to run a small car. So I put my automotive 12V charger on it to bring it back up to capacity. After a few hours of charging, I put the key in to see if the GL would fire up for me this time. It was about 20º warmer than that cold day in Minnesota the week before, so I had my fingers crossed that there wasn’t actually something wrong with the bike. Fuel on. Switch on. Clutch in. Bit of choke. Contact.

The GL chunga-chunga’d for a few turns, then fired, and to my amazement, ran. I was genuinely, pleasantly surprised. I expected to be trouble-shooting the bike for a week. Was it just that sensitive to cold? I didn’t spend long thinking about it, actually. If I’ve learned anything about working with these older bikes, it’s that they have moods. Usually it’s something mechanical, but sometimes they just don’t work, and it’s pointless to try to understand it. They just don’t want to. The best I can do is chalk it up to character and move on. At this point, I was just happy the thing ran. After all, given all the work its received in the past year, it had better. There was no good reason for the GL not to start in Minnesota, but it hadn’t. Nothing I could do about that. It was running now and that’s what mattered.

Thing is, because I hadn’t expected it to run, I wasn’t actually ready for it to be running. With any machine, especially a carbureted motorcycle, it’s unkind to the engine to just fire it up for a second and then shut it off. If you’re going to run it at all, it should have a chance to come all the way up to operating temperature. That way everything gets re-seated and splashed with a fresh squirt or two of hot oil. The best way to get temperature on the motor is actually to ride the motorcycle. Make the motor do a little work and it’ll be much happier, much sooner. This is especially true of these older Hondas, which tend to be grumpy, cold-blooded things when they’ve been sitting.

So there was nothing for it, I needed to ride this thing for its own good. I know, the sacrifices we make for our machinery, right? It was about 45 degrees out and well after sunset. I didn’t have a jacket handy, or even gloves. I hadn’t replaced the riding boots I threw out when we moved. I didn’t even have a clear shield for my helmet. Nevermind that I also hadn’t checked tire pressure or anything else on the bike. Nevermind that the throttle-side hand control had pulled loose because the throttle cables are too short. I’d have to keep it simple, but the bike couldn’t stay in the garage.

Blipping the throttle, I tried to keep the motor happy until I could get it backed out of our new garage. Tamping down into first, I eased off the clutch and gave the old boy a little throttle. The GL groaned forward. I gave it a little more juice to overcome the lag and off we went. My visor was up so I could see, and the brisk wind made my eyes water. I was just going to make the block a couple times to put some temperature on the motor. Nothing fancy, and definitely nothing fast. I opened up onto the main street in front of our townhouse and the GL surged forward in a way only that bike can — that tidal wave of torque coming off its boxer four.

I ankled up into second, then third and soon I was cruising faster than my eyes could stand. I slapped my visor down and the night streets became a blur of street lights and car headlamps. I could see through my darkened daylight visor, but not well. It didn’t matter though. As I’d opened the throttle, I realized that this little ’round-the-block jaunt was my first motorcycle ride of 2012. It was the long-awaited scratch to an itch I’d had since I put bikes away in November. It felt amazing — a catharsis of spirit — a fresh embrace of an old friend.

The ride was short, maybe ten minutes total. I’d gone about two miles winding my way up and back and around our neighborhood — never making it any higher than third gear or about 35 mph. It was enough, though. The bike was happy, cared for, and so was I.