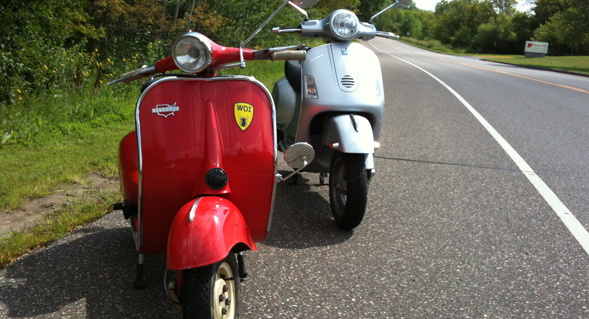 August 1, 2009 — When I set off for the Square Peg Diner this morning, I had to check the date. Although the calendar said it was the first of August, the temperature seemed more like the first of October. The partially overcast skies with their patches of sunlight and lightly gusting winds felt all too much like autumn. It’s been a very, very mild summer in Minnesota this year. This on the heals of a particularly long, cold and wet winter. I’m fine with it though. I spent my youth in the deep south and I’ve had all the summer heat I need. All the same, my mesh riding jacket felt pretty insufficient as I headed across the river.

I was excited to meet up with Joe, Pooter and the gang for another run of the Rattle My Bones route. I couldn’t make the previous check ride and apparently the route had changed significantly since that first time we all ran it. I was also hoping to arrive at the Square Peg Diner in time to have breakfast — the food is fantastic and I highly recommend their establishment. Thankfully I arrived with just enough time to devour a delicious combination of two english muffins, two fried eggs, and a foothill of hashbrowns. Great fuel for our 80 mile urban ride.

The seven of us mounted up on what was almost an all-Vespa group (we had one Genuine Buddy Blackjack with us). Since it’s a common starting point, the first 15 minutes or so of the ride route are just like last year — winding our way through the marginally abandoned semi-industrial section of eastern Hennepin Avenue. Last year we meandered our way all the way across the Twin Cities, ’round Lake Minnetonka, and back across town to St. Paul. This year’s route loops us around White Bear Lake and where last year we rode almost all of the Grand Rounds, this year the surface streets seem much more rural. That’ll be a lot easier to block in terms of traffic, but some of the intersections are going to be a bit complex.

The half way point is a grand little cafe called Ingredients. Although our stopping point has options ranging from semi-fast food Chinese to biker bar burger fair, I’ll definitely be having lunch at Ingredients come ride day. The food is fantastic. Even my simple lunch of rice, beans, and avocado was spectacularly gourmet.

Much like last ride, we had a tire incident that paused our progress. Thankfully a spare was on-hand and we were rolling along again in a few moments. Once we wrapped the ride up at Blue Cat Motors, I felt like I had a much better handle on what the ride will be like. Our final check ride is scheduled for next weekend with the rally only two weeks away! I think this year is going to be yet another great weekend of scooter madness. If you’re a scooter person and can make it to the Twin Cities, I highly recommend attending. And heck, even if you’re not a scooter rider, you’d still have a great time. I attended my first RMB two years ago sans-scooter and had a lot of fun.

High points
Riding with such a good group of riders. There really is nothing better for honing your riding skills than running a nice tight formation with other experienced two-wheelers. Seeing how that bike in front of you is entering a turn, or how much speed they’re carrying into a corner, or when they are and aren’t braking is a great way to get better at riding your own scooter.

Low points
My only complaint could be that there just weren’t very many of us. We’re going to need way more blockers than what showed up for these two check rides and it would be best if they were familiar with the route before we all have to streak up the wrong side of the street at 60 mph.