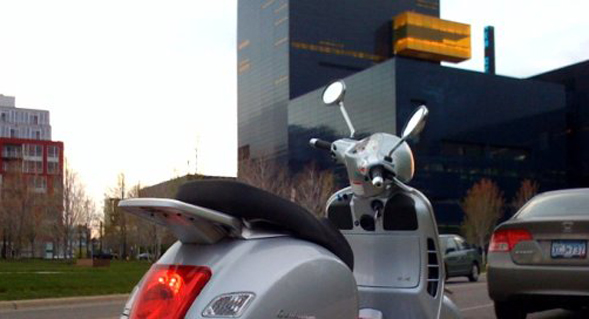 May 9, 2009 — On a lazy and otherwise cloudy and cozy Sabbath, The Mrs and I needed to just get the heck out of the house. With a couple of hours daylight left, we shot across the Mendota bridge and up the Mississippi River Parkway. I just love the Grand Rounds.

They’re such a great default route. We finally turned around in the shadow of The Guthrie Theater to head home, but would have kept going with a little more daylight. The temperature was just cool enough to be refreshing and the crisp air made for such a relaxing cruise up the parkway.

High points
The whole ride! I’m still getting used to the Vespa finally being able to corner correctly. It’s a very nice adjustment to make. Also the hilarity at how many guys in their cars feel the need to prove to me or them that their car is faster than my scooter. Really, man? Hilarious. Especially when it turns out that they’re NOT.

Low points
Running out of daylight and having our hopes of a Star Trek movie marathon dashed when Best Buy didn’t have them. Oh well.