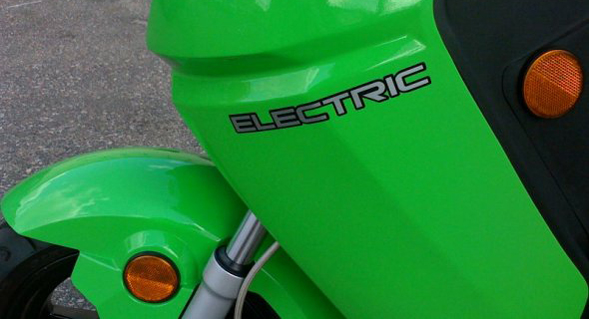 May 1, 2009 — My new job (yay!) starts on Monday, so today was my last weekday to just ride for the hell of it. Unfortunately, my desire to do so was somewhat dampened by the ongoing wobble issues I’ve been having with the Vespa. The tire wobble, as unsettling as it can be at time, is only part of the equation. In a lean, the bike just feels off. It’s hard to describe, but it’s almost like the bike “scissors” around curves.

So I made a service appointment with Scooterville to address what I postulated to be the real issue: looseness in the front fork. Being a mechanical product of Italy, my Vespa wasn’t quite right when delivered to the states. According to the folks at Scooterville, each delivered Piaggio often has little shipping or assembly issues that have to be addressed before they can be sold. A loose bolt or mirror here and there, and commonly a slightly misaligned front wheel. My Vespa had this issue from day one. The front wheel was about 4-5º left of perpendicular with the handlebars. The low-tech solution to this, I came to find out, was to hold the handlebars while one of the ‘ville mechanics kicks the front wheel back straight. When they did this to my Vespa, I thought it was clever, if a bit disconcerting. What I’d failed to realize in retrospect was that the day when my “adjustment” was done was the first day my illustrious wobble appeared. It was the same service visit to correct my rear tire issues, so the whole feel of the bike was foreign to me and I didn’t notice the wobble for several days and even then, it would come and go. Two weeks out though, I’d gotten to know the Vespa again and something just seemed wrong up front. The cornering was weird and I was getting the wobble at several speed ranges both accelerating and braking. The front wheel had returned right back to where it was not a day after “adjustment,” so I suspected I had some side-to-side play in my front fork that if it wasn’t causing my wobble all together, was at least exacerbating it.

I arrived at Scooterville and explained my realization about the “adjustment” and that being when the wobble appeared. Three techs rode the bike, but couldn’t perceive the wobble. That didn’t really surprise me. I’m a pretty weighty guy, and the wobble can be tricky to discern from the bumps in the road, so the chances of one of these guys half my size having the same ride experience I do is pretty slim for something as subtle as this. Once the third mechanic had ridden the bike (a guy much closer to my size), and still hadn’t been able to feel what I was describing, he sat down with me as to his credit simply asked me what I’d like them to do about this. I asked him if he’d be willing to pop the headset on my Vespa, loosen the mechanism that holds the fork in place relative to the handlebars, align them, then tighten the shit out of it.

“Sure, I can do that. If that’s what it takes for you to feel good about it, we’ll make sure it’s nice and straight for you.”

Awesome. Nothing like great service! I gave him a hand and with tape measure and sight lines, we got the front wheel lined up with the rear and the handlebars within 1/16″ of being perpendicular to the centerline of the bike. He then proceeded to wrench the hell out of the collar bolt that secures the fork to the headset. One variable eliminated! If the wobble persisted after this, then it would have to be something tire related. He did point out that my rear tire appeared to be a bit cupped — a tread wear pattern that he sees on his own bikes from time to time. I can’t help but think that play in the front end would contribute to the tires wearing funny.

Riding home, it was a whole new bike. The wobble was still there a little bit, but it felt completely different. It’s amplitude was much lower and its range of speeds was much smaller. But more importantly, the Vespa finally felt right in corners. I could lean it in deep without it wondering around on me through the turn. It was like I finally got my scooter back! Big props to Stephen Anderson over at Scooterville for putting in that little bit of extra effort to not only make the customer happy, but actually fix my issue.

[update] I’m happy to report that more than a week has passed and the Vespa still feels fantastic. What little wobble persists seems to be just the weird wear on these crappy OEM tires. It doesn’t bother me anymore though. With the front end of the bike sorted out, the tire wobble doesn’t effect the handling or ride of the bike hardly at all.

High points
Great customer service at Scooterville and finally having my Vespa back! Finding a really easy and quick route from Eagan across the river into downtown Minneapolis. Conversations with bikers at Whiskey Junction. I’m officially addicted to their on-tap root beer and their onion rings.

Low points
The hassle of having to go back for a third service visit to get something fixed that had we simply done it right the first time probably wouldn’t have been an issue. It’s not really a big deal, I just hope that alignments in the future get done right for the sake of unwitting owners.