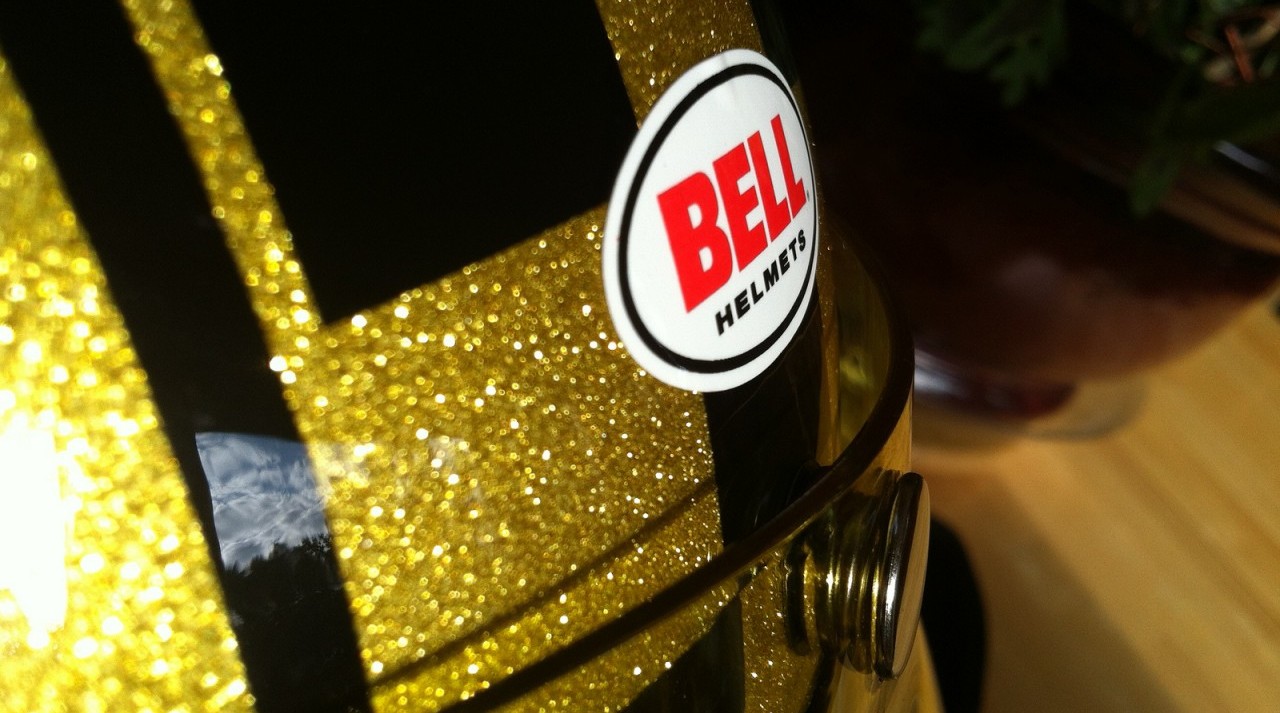 July 19, 2012 — I hate riding a motorcycle with a full backpack. It’s uncomfortable and makes it tougher to scan the road quickly. On that muggy July evening though, I didn’t care. Atop my ’74 Honda CB450 Supersport, I was threading through the heart of south Minneapolis, quite literally riding into the sunset. I wasn’t alone either. To my right was a bright gold Honda CB350 ridden by a guy maybe a couple years younger than me. We’d both just come from Third Thursday at BlueCat Motors and for the moment anyway, we were headed in the same direction. His Dunstall pipes and my single race exhaust sang a growling duet of vintage motor biking as we cruised up Lake St toward a purple sky, the chain of lakes, and Uptown.

Though we weren’t really riding together, we chatted at the stop lights and cut paths for each other through the evening traffic. I’d say we frolicked if that didn’t sound so silly. We traded the lead as the flow of traffic evolved until finally, he split off down Hiawatha Ave.

Approaching the Lake St./Lagoon Ave split, I remembered how much I used to hate this street. Although Lake is one of the most direct east/west streets in the Twin Cities, it can be crowded with inattentive traffic and the stretch between Uptown and the Mississippi River seems to have about a thousand intersections. Truth be told, it’s a stretch of road that intimidated me as a green scooter rider in the TC. I’d find elaborate routes to avoid it when I could. Yet that evening, aboard my CB450, I realized just what a different rider I’ve become. Lake was nothing. I’d been riding my scooter and motorcycles in Chicago all season — a place profoundly more aggressive and crowded than anything MSP had ever thrown at me. Sure, I had to keep my eyes open on Lake, but realizing just how tame this once intimidating route really was in the grand scheme of things, a contented feeling of accomplishment washed over me.

At the intersection of Lagoon and Hennepin, I saw the now boarded-up Uptown Theater. The Mrs and I had seen In Bruges there when it had first come out. I remember thinking it was kind of a shit hole, but it was still sad to see it shuddered. They used to do midnight showings of Back to the Future and other cult classics. Not often enough, I guess. What it drove home was a profound sense of absence. I didn’t live here anymore. I was no longer privy to the Twin Cities and its changes over time. Funny how not being there for a change somehow lends it that much more gravity. I’d never really cared about the Uptown Theater before, yet I was sad to see it go — sad to remember that this place I used to call home really would continue on without me. With the 450 pumping beneath me, the light finally changed and the two of us shot down the sweeping roadway to rejoin a two-way Lake St.

With Lake Calhoun on my left, it was time to make a choice. I was headed to Plymouth, basically due west of the Minneapolis city center, and I had a couple of good motorcycle ways to go. I opted for Hwy 7, because this was yet another road in the Twin Cities where I felt a sense of history. Hwy 7 was where I learned to ride my scooter on a freeway. It’s a relatively uninterrupted stretch of mostly 45 mph four lane and it was the fastest way east/west that wasn’t a properly big, busy road. I’d cut what felt like my high speed teeth on this road — learning to read that kind of traffic and learning how to settle in and cruise for a few miles. The 450 made easy work of the little road and delivered me to Hopkins in what seemed like a blink.

This little crosstown ride was at that point the furthest I’d actually ridden my CB450. We weren’t strangers anymore, and it was fantastic. We were learning to trust each other. The howl of the engine was being etched into my ears. My hands were conformed to the grips and my boots never had to hunt for the brake or the shifter. My body position was utterly perfect, which at 6′ 3″, doesn’t happen on many motorcycles. All of Robb’s little touches had really added up. This bike had been made for me — tailored like a good shirt — and the fit was just right. That fit went deeper than just ergonomics though. The bike’s character fit me, and it had been created in a spirit of gratitude and fraternity that I could hear in the exhaust note. I could feel it in the rebound of the suspension. I could sense it pumping in the motor oil with every beat of the engine’s twin heart.

I barrelled up to Hopkins Crossroad and swept the bike into the turn lane, ready to turn north into Plymouth. I’d have to wait on the light, but I didn’t mind. The heat had subsided a bit, even if the humidity hadn’t. I sat there conspicuously on my brown and gold vintage sport bike with my bulging backpack on, gold helmet sparkling in the last rays of the setting sun, proud as punch that this enviable little machine was mine. All mine, and for those few days I’d be in MSP, all I had to get around on. We were stuck with each other, but it was alright. The bond had been made.