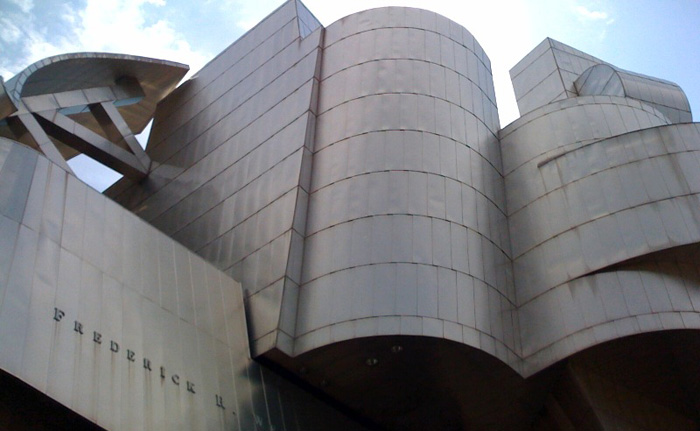 4/24/2009 — Today was a genuine vacation ride. Since the season opened about a month ago, I’ve ridden out of road hunger, out of compulsion, out of boredom, but now my days of lazy scooting are numbered with the new job starting up. Today the weather was my siren song and I was not alone. Forecast called for clear skies, temperatures in the upper 60s at 9:00 am, but with storms set to move in late afternoon. I took care of some small bits of business and headed out for a parkway ride. For those who haven’t ridden in the Twin Cities, there’s a fantastic network of urban scenic byways called The Grand Rounds. They’re scooter heaven. Little traffic, fantastic views and they wind right through the heart of the Twin Cities and up both shores of the mighty Mississippi.

An encounter on Minnehaha Parkway set the tone for the whole day of riding. I met up with a cheerful chap on a Triumph Speed Triple, one of my favorite bikes. We rode together for 10 minutes or so, chatting it up at stop lights. Great fun. This sort of thing repeated itself throughout the rest of the day. As I wound my way ’round the Rounds, I ended up loosely attached to random groups of riders, mostly Harleys. At one point, I stopped to check my phone and wound up in a 15 minute conversation with a Goldwing rider in his 80s. I would have pegged him 55-60 — about my dad’s age — to look at him. He boasted more than 60 years or riding experience. Amazing. Like most folks of that age, I could tell that more than anything, he was looking for someone who’d listen. He talked my ear off. I had an appointment with The Mrs at our new apartment to sign leases and so forth, otherwise I could have listened to this guy tell motorcycle stories for an hour.

By the time I parked the Vespa in our new garage in Eagan, I’d been all the way from Eden Prairie, across the heart of Minneapolis, through the middle of the University of Minnesota campus (which was crawling with scooters), across the Mississippi River, through downtown St. Paul, and all the way up into Woodbury before returning through Bloomington and finally into Eagan. Nearly 100 miles of city parkway riding. Fantastic.

High points
Seeing a 50-ish year old man on the largest diameter unicycle I’ve ever seen, riding at alarmingly high speed down the East River Parkway bike path. Also, so many great, in-prompt-to conversations with other two-wheelers at stop lights and just seeing hundreds of bikes out enjoying the weather. Also, stopping by the Weisman art museum. The tale is told that the fellow for whom the Weisman is named (or perhaps his son), was the original owner of my first scooter, a 1979 Vespa P200E. When I bought it, the scooter was covered like a steamer trunk with stickers from exotic art buying locations around the world.

But above all, the ultimate high point for me was 20 years in the making. Today I swung by Blue Cat Motors in St. Paul and rode a Honda Elite 80 they have for sale. You see, when I was a kid I saw a Honda Elite 80 and thought it was a space ship that could take me anywhere and I wanted a scooter ever since. On sheer principle, I will someday own one of these. Who knows, maybe the one I rode today.

Low points
On the last leg of my ride, the Vespa’s infamous fuel evaporation capture system went completely foul on me and I was barely able to get the bike started and keep it running. So obnoxious. I’ve been solid with a vent hole in the gas cap so far this season, but today’s warmer weather was more than that little hole could vent.

For the unfamiliar, the EPA forced Piaggio Group to add a fuel vapor recapture to all the scooters they sell in the USA. Unfortunately, their tacked-on solution completely sucks. If you ever overfill your tank while refueling (which is incredibly easy to do), fuel will overflow the charcoal capture canister and you end up with petrol in your intake tract. The air filter soaks with gasoline, and the bike won’t run worth a damn. For most, the only solution is to remove the system all together. Aside from hard starting, the “evap issue”, as it’s known on the boards, causes rough running and in the case of my Vespa, lots of stalling and  surging from what amounts to a very rich mixture. Bottom line is, I’ll twist the throttle and nothing will happen, and that’s not safe.