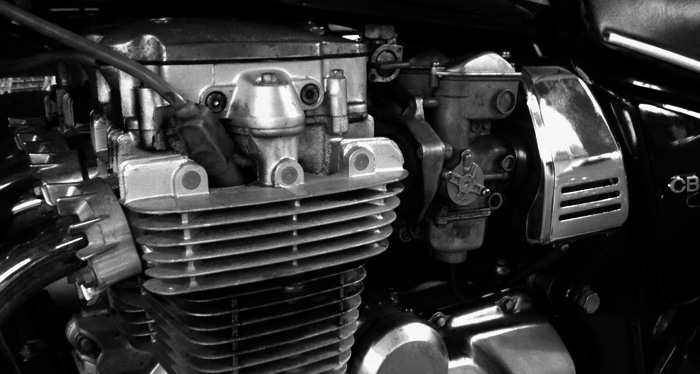 June 1, 2010 — Last October I read a book about the pleasure of working with one’s own two hands. In a way, all that Shop Class as Soulcraft did was remind me of things I already knew I enjoyed, but that reminder has really impacted my quality of life since then. I was already a tinkerer, but in kind of a half-assed way. The scope of my mechanical ambitions was usually pretty timid.

I think we can all relate to the intimidation of something like an engine, or an electronic device. Yet really, everything we interact with is simply a combination of peoples’ ideas — usually then assembled by more people in a factory somewhere. What’s more, if we look for it, there’s usually a manual — a book — that will tell us how it all works and how to fix it. I think it’s our removal from those thinking and making processes that makes the inner workings of machines such a mystery — and it’s easy to fear a mystery.

In the weeks since The Mrs and I procured a pair of old Honda motorcycles, we’ve uncovered a handful of mechanical things that these bikes need before they’re truly roadworthy. There’s dry rot on the CM400’s tires. It needs a new chain and sprocket set. It’s running a bit lean, and needs its front fork seals redone. Worst of all, it’s got a significant fuel leak from the carbs and I’m not sure where from yet. My CB650 needs a new tach cable and desperately needed its carbs synchronized. It’s nearly due for a new rear sprocket and chain, and both bikes were in need of overall tune up and maintenance. So the long Memorial Day weekend was a perfect opportunity to get my hands greasy and get these motorcycles sorted out.

Starting with The Mrs’ CM400 twin, I consulted the service manual for the tune up procedures. Air filter, then plugs, then valve clearance, then carb sync, then compression test — I love how methodical these procedures have to be. No use in syncing the carbs unless the plugs are correct. I tore into the bike, removing first the seat and then the side covers and fuel tank. It’s amazing how quickly the bike gets bare. I pulled the air filter and it’s still looking pretty new. Some canned air through the element and it went back where it came from. Plugs were a tad scorched. The bike is indeed running lean. I hopped on the Vespa for a quick run to the O’Reilly’s down the street, where I bought them completely out of NGK plugs for our bikes and borrowed their compression tester. Next I cracked open the valve covers and removed the engine’s side cover so that I could turn the engine over at the generator. Valve adjustment is strange business, but if you follow the instructions, it’s actually pretty easy. It’s hard to imagine that the difference between .003″ and .004″ should matter, but it does. Sliding the feeler gauges in and out of those gaps feels a bit like dentistry — or at least what I imagine dentistry to be like. I’d much rather stick my hands down into greasy engine than somebody’s mouth. Yuck.

With all the cold service mischief managed, it was time to fire up the CM400 and get it warmed up to operating temperature for a compression test. The fresh plugs and adjusted valves gave the motor a fresh, sharp sound it didn’t have before. It’s still popping lean though. My money is on the Air Cutoff Valve. I shut it down and extract both plugs again, only to find that the borrow-a-tool compression tester kit from O’Reilly’s doesn’t include an adapter for this size of spark plug. In the end, I had to buy my own tool, but it’s worth it now to have the equipment in-hand whenever I want it. Both cylinders were within one psi of each other. Hooray for healthy rings! Unfortunately, in hooking up the gauge I noticed a pretty epic fuel leak coming from somewhere underneath the carbs. That will warrant further investigation. The carbs are due for a cleaning and I’m going to replace the Air Cutoff Valve for good measure anyway, so that leak will have to wait. I’m just hoping it’s something simple like a loose bolt or a bad bowl gasket.

The CM400 twin was pretty easy to wrench. Now for the CB650’s four cylinder mill. Twice the valves, twice the plugs, twice the hassle for everything. Plus this bad boy needed a carb sync, which I’ve never done before. Four carbs — this should be interesting. I started down the same list as the CM400. Air filter, plugs, valve clearance, etc. The valve clearance was a very different animal on the CB650. Instead of gapping where the rockers meet the top of the valves, you gap the other end of the rockers where they meet the cam lobes. It took me a few rotations of the crank to make sure I was at top-dead-center on the correct cylinders. The valves were all pretty tight. The “free play” I was supposed to feel according to the book for was really hard to perceive. There were a couple moments there where I wasn’t sure if I should just leave them alone. But after consulting the book a couple more times, I decided to trust the book and trust myself. Besides, leaving them tight will only get them burned in the long run.

After lots of feeling ’round and adjusting set screws, the valves were in order. Time for the plugs. The CB650 takes an 18mm spark plug, which fit none of the three spark plug sockets I had. I snagged a deep socket on another Vespa O’Reilly’s run, but it wasn’t a plug socket. I pulled the #4 plug first, which was easy to do with the gas tank off. I gapped a new plug, slathered its threads with anti-sieze grease and replaced it in the cylinder. Now for #3, except there was a problem. The socket wouldn’t fit down into the opening, so I stole the plug socket from the CM400’s tool kit.

Every once in a while, I want to travel to distant lands, find a particular engineer. and beat the hell out of him. Whoever designed that toolkit plug socket is on my list now. The fact that it doesn’t have a proper 3/8″ or 1/4″ driver receptacle is just ridiculous. Instead it’s just a pair of opposite holes for you to stick a screwdriver through and twist. Thing is, there’s no room for that on this motor. It took about 15 minutes to get the plug extricated from the cylinder, even after removing the tach cable mechanism for extra room. There’s just no excuse for that — and in my shop no less! I had the tank off the bike, a nice little stool to sit on and everything. Ideal conditions! I can’t even imagine having to use that tool on the side of the road somewhere, in the rain.

I wrangled the other two plugs out and replaced them, but it put the kibosh on doing a compression test on this bike for now. Especially since the bike has to be warm to do it. That’d mean extricating the plugs with the wrong tool while the whole motor is hot. No thanks. I put the bike back together and took it for a quick spin ’round Eagan. The fresh plugs made for a nice crisp throttle response. I could just hear the valves in a way I couldn’t before, which is a good thing. As my dad says “If you can hear the valves, at least you’re not burning them.”

The following day, I procured two key tools for the long-term maintenance of this bike. I bought a proper, super long, thin wall spark plug socket and a 4-cylinder carb sync tool. It set me back a some cash, but it’s worth it in the long run. Sync tool in hand, I set about performing the synchronization on the CB650. With four separate carbs, these Honda mills essentially have four separate throttles. If the carbs aren’t in sync, then each cylinder is getting its air/fuel mixture at a slightly different time. This can mean rough running and significant engine vibration. The sync is accomplished by balancing the vacuum between the carbs, which you do with what looks like a set of four thermometers crossed with an octopus. What’s tricky is that you’ve got to run the test with the tank removed — meaning that you’ve only got the fuel in the carbs to work with — which is only about five minutes worth. The motor has to idle while you use set screws in the top …

You’re not even remotely still reading this are you? Sorry, this thing has gotten a little long. Cutting to the chase in 3, 2, 1…

It took me about 4 hours total, just to do the carb sync. Every time I’d start to get the carbs close, it’d run out of gas. It was pretty maddening. Finally, the four readings matched for just a second before the engine started to sputter out of fuel again. I called it. Done. That was the best I was going to do. A quick compression test showed all four cylinders really close to each other. So it looks like the engine is in really good shape, but I was pretty tired getting there.

One thing remained. I simply had to ride the bike after so much effort. It was about 10:00 pm. With the tank and seat back in place and all this tune-up work finally done, I expected it’d run a little better or smoother. It turned out to run like a completely different motorcycle. The engine was so smooth it was like the bike ran on milk instead of petrol. It felt about 30% more powerful too. It finally felt like the superbike the CB650 is acclaimed to be. Amazing. As much as I’ve liked this bike all along, I absolutely love it now. So much power, and just so smooth. First gear starts are easier too. Love it!

I returned to my garage, where next door my neighbor and his posse were prepping a 24 Hours of Lemons car. The driveway contained his Lancer Evo, a Viper, and an Acura NSX. I didn’t care though. They could have them. I had my three decade old UJM now running spectacularly at my own two hands. That’s priceless.