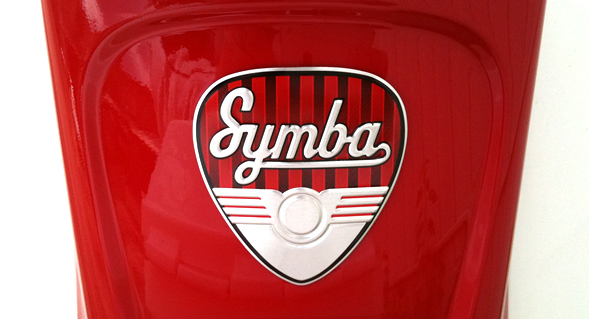 I grew up listening to “oldies” music. Thinking back, it seems like the car radio was always playing either NPR’s All Things Considered, or some pop hit of the ’50s, ’60s, or ’70s. I was fine with it. I’d spend hours listening to my parents’ Beach Boys and Simon & Garfunkel LPs. It wasn’t until high school that I started finding music on my own, but I never quit liking many of those old bubblegum classics. One song that sticks pleasantly in my head to this day is Little Honda by the Beach Boys. What I didn’t know as a kid was that this little ditty is actually about Honda’s iconic and globally ubiquitous Cub. In fact, the more I’ve learned about the Cub/Passport, the more convinced I am that I simply have to own one.

While there have been more than 60 million Honda Cubs produced (according to Wikipedia), there are also very capable clones available. One of the most recent of these to hit these shores is the SYM Symba. The story goes that SYM was one of many contractors employed by Honda over the years to produce the Cub. When Honda discontinued the Cub some years ago, SYM kept manufacturing it and sold their own “clone” of the bike. It’s a story we’ve heard over and over from other successful scooter launches here in the states — the Genuine Stella being a prime example. SYM has steadily built a great reputation for making some of the highest quality scooters available anywhere, with fit, finish, and paintwork you won’t find anywhere else. If anybody could do a reborn Cub up right, it’s SYM. So yesterday on my way home from a doctor’s appointment, I stopped by Blue Cat Motors to see if I could sweet talk my way into a Symba demo ride. I met Ryan and got the skinny on this retrotastic little bike. According to him, the Symba is almost bolt for bolt a 100cc Honda Super Cub, but with Mercedes Benz-quality paintwork and a greatly improved front suspension. Ryan knows his Cubs. He’s owned many over the years and has a couple in his garage. So when he says the Symba is the Cub done right, he knows what he’s talking about. In fact it’s such an improvement in his opinion, that Ryan has put his cherished Honda C70 Passport up for sale because the Symba really is that much better. With fresh air in the tires, I set off of this little red and white piece of motoring history. For the uninitiated, the Symba is moved along by a 100cc 4T carbureted engine mated to a 4-speed transmission. The gearbox is described as semi-automatic, which makes it sound like some sort of machine gun. In reality, I think it’s better described as a semi-manual or “clutchless” manual. If you’ve ever driven an ATV, you’ve probably encountered this style of shifting. Using your left foot, you press a lever and put the bike into 1st gear. There is no clutch, and the bike won’t stall just sitting there, much like an automatic transmission. You twist the throttle and off you go. When it’s time for the next gear, you simply close the throttle, rock the heal shifter with your foot, then open the throttle again. It’s easy as pie and really quick to catch onto. Downshifting is the same proceedure, but your timing is more critical if you want to do it smoothly. Downshift at the wrong time and the bike will lurch a little bit. That’s all part of getting used to it, however. If you’re coming from an automatic scooter background, the only real adjustment is that the rear brake is a lever under your right foot, just like a conventional motorcycle or an old shifter Vespa.

Once I got a feel for the shifting and the braking of the Symba, I headed out onto the streets of St. Paul. The power of the bike is best described as optimistic. It’s not a hot rod, but it’s not a dog either. The Symba has a very visceral engine note and lots of fabulous, old school vibration that doesn’t make it feel flimsy, but simply like a bike born of another era. There’s a very Little Engine That Could quality about it. It’s sturdy. It’s determined. Yet it’s surprising spry and nimble like a bicycle. The positively antique-looking drum brakes front and back stop the Symba surprisingly well. Being such a small and simple bike, the drums are perfectly adequate, even with all 6′ 3″ of me aboard. The suspension is certainly not as cush as my Vespa, but again, perfectly adequate. What I quickly learned about the Symba was to simply “go with it” — to let go of any expectations of what a bike should feel like and just embrace all the goofy character the Symba had to offer. It really is like nothing else I’ve ever been on.

I was able to quickly build my confidence with the Symba. It’s like a pet — terribly good company — like a friendly labrador that is just excited to be out and about. It’s forgiving and unassuming handling simply makes you want to keep riding it. I told Ryan I’d be back in 15 minutes. Now I wanted to take an hour. I wanted an afternoon. Damn it all, I wanted a Symba.

After not nearly enough grinning, I returned to Blue Cat. “I get it now.” I said to Ryan. He just grinned and nodded. I now understood what he and 60 million other Cub riders had known for decades. “It’s not a big motorcycle, just a groovy little motorbike. It’s more fun than a barrel of monkeys, that two-wheel bike.”