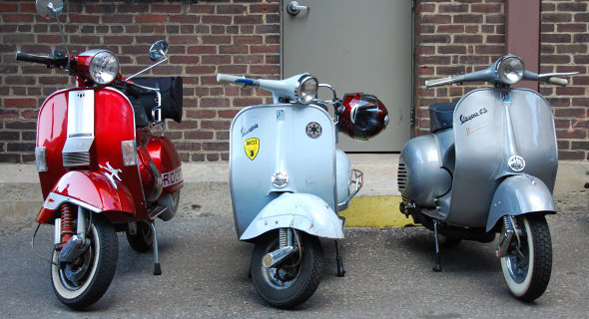 June 13, 2009 — Today I rode the same road four times. I’m not complaining, it’s just the way it went down. The point of the excursion was to attend Los Vesparados: The Art Of The Scooter, an art show that featured works inspired by scooters and scooter culture.

The Mrs and I headed out about mid day to check out the show, held at the Northrup King Building, home of the NE Minneapolis art district. The posters for Los Vesparados didn’t list a specific time, so we just assumed the show ran all day. Turns out we were wrong. The show started at 6:00, and it was 1:00. It wouldn’t have been a big deal if the rest of the studios had been open, but the place was kind of a ghost town. It was a Saturday afternoon and chances are everybody was up late the night before. With plenty of time to kill we headed home to take our dogs to the park.

We haven’t parked our dogs since moving across town to Eagan, so we weren’t sure where to take them. We decided on the Minnehaha Falls dog park, as it was the closest and, well, I knew how to get there. I expected yet another fenced in field lined with trees. What we found was the most magnificent city park I’ve ever been to, dog or no. There was no field. There was no fence really. What the park did have in spades was space, serenity, and dogs! It’s just acre after acre of trails and what looks like the enchanted forest from every fairy tail movie you’ve ever seen. Go deep enough, and the trail opens up onto a gorgeous sandy beach on the Mississippi River. It’s the western shore, so the whole beach — completely overrun with dogs of every size — was in cooling shade. Fantastic.

We did finally make our way back to Los Vesparados and it was well worth the return trip. Many of the normal Twin Cities scooter crew were in attendance and tons of great scooters and motorcycles showed up. I was so glad to have a good camera on hand. Lots of great art and David Harrington was making the rounds with his microphone recording an episode of the JustGottaScoot.com podcast. [UPDATE] Dave actually interviewed me briefly and that bit is the first segment of the podcast.

High points
Discovering the Minnehaha dog park — which is now my favorite place in the Twin Cities. The show was great, and I was very happy to procure some prints.

Low points
Lots of drama with our beagle at the dog park. Nothing bad, just lots and lots howling!