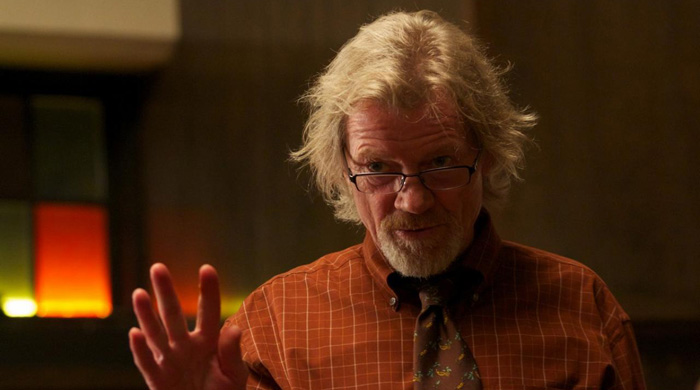 Chances are, you haven’t heard of Kevin Smith’s penultimate film Red State, which was released on DVD, Netflix, etc. yesterday. That, assuming you’ve even heard of Kevin Smith. Best known for what are affectionately known as the “Jay & Bob” movies, Smith got his start shooting the now iconic Clerks on a lark, for less than $30,000, mostly on his own credit cards. Clerks was a smash hit at Sundance that year and Kevin Smith went from living in his parents’ basement to being an established writer/filmmaker. So much so that when his buddies Ben Affleck an Matt Damon wrote the Oscar-winning script for Good Will Hunting it was widely speculated that Smith had polished the script for them, even though he hadn’t. While some look at Smith as the slacker godfather of indie film, none of his movies have been huge box office successes. So lately, he’s gone even more independent.

I came to appreciate Kevin Smith for his film Chasing Amy. Like all of his early movies, Chasing Amy works because it’s well cast and well written, but not necessarily because it’s well directed. It’s not, but Kevin Smith will be the first to admit that he’s not really a directer. He’s a writer. However, once I saw Red State, I have to disagree with him. Smith has said over and over that after Red State he’s “got one more movie in him” — his hockey epic, Hit Somebody. This is an utter tragedy because after watching Red State, I’m of the opinion that Kevin Smith has finally learned to make movies as well as he writes them.

Enough preamble though, here’s why Red State is worth your dollars to own, and your time to watch.

A unique, relevant and compelling story
What’s important to understand from the outset is that Red State is a religio-political horror movie. It’s not a comedy, though it is funny. It’s not a thriller, although it is thrilling. Kevin Smith’s synopsis on his podcasts has been “Three boys go into the woods to find sex. Instead, they find God.” The story centers around the Five Points Church, an extreme right wing religious group based in part on Fred Phelps’ Westboro Baptist Church group (the “God hates fags” people who love to protest military funerals and anything else they can show up to) and one part on the Branch Davidians (the group involved in the ATF’s infamous Waco, TX incident). Although they are also protesting funerals with an anti-LGBT message, Red State‘s Five Points Church is not intended to be a stand-in for either group. In fact, Fred Phelps is mentioned by name in the film as someone other than Five Points’ Abin Cooper, played by Michael Parks.

The story starts in typical Kevin Smith style, with plenty of raunchy talk and snappy dialogue. The plot gets rolling when the three boys we meet in the beginning of the movie make their way up to the town of Cooper’s Dell for an internet sex hookup. We quickly learn that aside from their funeral protests, the Five Points Church is (SPOILER ALERT) trapping people with sex, then executing them inside their church compound because it’s “what the book says.” That book is, of course, the Bible. The first person we see Abin Cooper and his “family” execute is a homosexual teenager. This, as the three boys we met in the beginning of the film look on in horror, knowing that they’re probably next. The sequence is riveting and you realize that the horror in this horror movie is not in the violence, but the religious extremism of the Five Points Church congregation. Act one ends with the boys getting loose, and through a series of mishaps, the true nature of Five Points Church’s activities comes to the attention of the authorities — mostly through gunfire.

Act two introduces us to ATF agent Joseph Keenan, played by John Goodman. Keenan is awoken by a phone call from his superiors and inevitably has to go deal with the Five Points Church situation. Once there, he’s joined by the ever wise-cracking Kevin Pollak, who is simultaneously hilarious and credible as a jaded ATF agent. I won’t spoil the climax or the denouement, but I will say that how Goodman and Park’s characters finally meet face to face is one of the most brilliant bits of plot writing in recent memory. It’s surprising, mysterious and had me sold hook, line and sinker. It was especially satisfying given my own religious upbringing, as I instantly knew which part of the Christian doomsday mythos Smith was referencing.

The third act of Red State is almost entirely Kevin Smith doing what Kevin Smith does best: telling a story in dialogue. John Goodman is giving a debriefing deposition to two gentlemen from the Department of Homeland Security regarding the incident at Cooper’s Dell. Pay special attention to Agent Hammond, played by Mad Men alum Patrick Fischler. He delivers the essential morale of the story, which I won’t spoil for you here. I will say that it’s a bit of preaching that the movie earns. In a single sentence, Hammond delivers a poignant commentary on religious extremism that lands like an anvil from a cliff top.

Immaculate casting, cinematography and dare I say it, directing
Red State is as well cast as it is well written. It’s a very “tight” little movie and the cast of actors bring it to life could not be better matched to their task. Michael Parks is downright haunting as Abin Cooper. Melissa Leo as the manic Five Points matriarch, Sara Cooper, is as frightening as any knife-weilding slasher I’ve ever seen in her desperate, frantic fanaticism. John Goodman’s performance as the tired, conflicted Agent Joseph Keenan commands the screen whenever he’s on camera. I was charmed to see Buffy the Vampire Slayer alum Marc Blucas in a smallish role as an ATF sniper. Stephen Root is brilliant as the closeted local Sheriff. And of course, Kevin Pollak is delightfully himself as Goodman’s ATF partner. The whole ensemble cast simply works.

Watching Red State, I also couldn’t help but notice how good looking it was. The Kevin Smith movies I know and love were schlocky-looking at best, but it didn’t matter because we weren’t there for the visual arts. Red State is gorgeous. It’s so well shot and I couldn’t help but lovingly think “he finally learned how to make a movie. Good for him!” Knowing that Kevin Smith also edited the film himself, he really does deserve full credit for how well made this movie is. I didn’t think he had it in him. I knew the guy could write, but knowing that Red State is his penultimate film, I’m actually kinda bummed that he’s getting out of directing. It’s that little bit of outrage. “This!? This is what you were capable of all along? And now you’re quitting?”

Will you enjoy this movie?
Tastes vary widely, obviously, but let me take a stab. The obligatory preamble about language and adult situations applies. This is an R rated movie, after all. However, you don’t need to be a fan of the horror genre to enjoy this movie. I’m not. You don’t need to be a die-hard Jay & Bob fan. There are no “snoochy booches” inside jokes. You don’t need to be a hard core liberal or an anti-religion subscriber to Richard Dawkins and the like. The message of Red State is relevant to us all, regardless of our faith or our political leanings. However, I think that if you are a fan of Quentin Tarantino’s movies, you owe it to yourself to see Red State. If you appreciate writing over star power, explosions and tits, then you’ll likely appreciate what Kevin Smith has done here. Most of all though, Red State is a movie that needs to be seen. It was a movie made almost entirely outside “the system” of corporate Hollywood. It’s the kind of movie that gets made when a talented artist has something worth saying — has an actual point of view worth sharing.

So stream it. Buy it. Do whatever you have to do, but watch Red State if you can. It will never be more relevant than it is right now, both to our culture and to the industry of movie making. It’s the halo work of art — the siren song to independent storytellers everywhere that, as Kevin Smith himself puts it, “If this monkey can make a movie this good, you can too!”